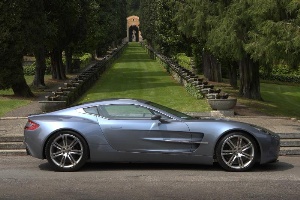 August 2012
Luxury British sport car maker Aston Martin has confirmed a stunning line-up of its latest models to appear at Salon Privé from the 5th to 7th of September at West London's Syon Park.

The line-up will feature the exclusive V12 Zagato, One-77 hypercar, new Vanquish super GT, luxurious Rapide four-door sports car and a show debut of the remarkable One-77 Cycle. Aston Martin CEO, Dr. Ulrich Bez will also sit on the judging panel of the Chubb Insurance Concours d'Elégance at Salon Privé.

A handcrafted masterpiece, designed and built at the company's Warwickshire headquarters, the V12 Zagato takes 2,000 man hours to build, with 100 of these hours spent on the paint alone. Just 101 examples of the Zagato will be built, with production starting later in 2012.

Among the most expensive cars exhibited at Salon Privé this year will be the £1.2 million Aston Martin One-77 – the company's ultimate expression of design, engineering and craftsmanship. Powered by a 7.3-litre V12 engine, certified at 750bhp and 750Nm of torque – it is the most powerful naturally aspirated car in the world with only 77 examples built.

Next up is the new 183 mph 6.0-litre V12 Vanquish. Cloaked, uniquely, in a skin of carbon fibre and with many design cues taken from the sublime One-77 this £189,995 super GT promises to draw the crowds at Syon Park.

Aston Martin's Rapide is a four-door ultra-luxury saloon that mixes sports car performance with enhanced space to accommodate four adults. Hand-built, the Rapide features a 6.0-litre V12 which takes the driver and three passengers from 0-60mph in less than five seconds and to a top speed of 180mph.

Continuing the Aston Martin theme this year is a new exhibitor at Salon Privé, with Factor Bikes showcasing its limited edition £25,000 One-77 Cycle.

Designed and manufactured by hand in England, the One-77 Cycle is both dynamic in design and intelligent in function, aligning it perfectly with the One-77 hypercar. The One-77 Cycle features cutting edge motorsport technology and the highest grades of craftsmanship, resulting in the most technologically advanced bicycle on the market.

Salon Privé's David Bagley said: 'Continuing 2012's best of British celebration we are delighted to see Aston Martin back at Salon Privé in 2012. With the One-77 now sold out, only three V12 Zagato's currently in the world and the exclusive bicycle making its show debut there really are some rare experiences for visitors to Salon Privé this year.'

FORMAT OF THE SHOW

Tickets for Salon Privé can be purchased at www.salonprivelondon.com or by calling the Ticket Hotline on 0808 100 2205. Entry is fully inclusive of Pommery champagne, lobster luncheon, English afternoon tea and full access to all areas.
Galleries