•High Revving 5.0L V8 Producing 467 hp in Five Passenger Sedan •Lexus Goes Racing on Global Scale and Reveals New Motorsports Logo DETROIT (Jan. 13, 2015) – Throaty rumbles and nimble handling aren't just for sport coupes. Meet the all-new 2016 Lexus GS F performance sedan. It is not a standard luxury sedan or track car. The GS F rolled into the North American International Auto Show today with a growl, four doors and enough cabin space to comfortably accommodate five adults. The GS F sports sedan, which combines a luxury cruiser with the handling of a sports car, is the latest vehicle to join the company's high-performance 'F' lineage that began in 2008 with the IS F sedan, then the fabulously exotic LFA in 2012, and just last year, the RC F coupe. Based on the mid-size GS luxury sedan, the GS F should not be confused with the GS 350 F SPORT. The GS F builds upon the GS 350 F SPORT with a comprehensive set of upgrades that re-engineer the car. From its engine, to its driveline, suspension and overall tuning that optimizes its reflexes, the GS F is an entirely new animal to the Lexus showroom.

'The cars with the 'F' designation are meant to generate a very positive feeling when you're behind its steering wheel, to be something that's fun to drive no matter who is driving or where it's being driven,' said Yukihiko Yaguchi, GS F chief engineer. 'With the GS F, we wanted to make a special car that not only would exceed the expectations of the most discerning driving enthusiast, but also something that most people can enjoy. In that way, the GS F embraces the virtues of sound, response and power, the cornerstones of the Lexus 'F' brand.' Under the hood will be a naturally-aspirated 5.0-liter V8 that produces a sonorous 467 hp (473 PS)*and peak torque of 389 lb.-ft. (527 Nm)* with a 7,300 rpm redline. The powerplant will be mated to a quick-acting eight-speed automatic gearbox with paddle shifters for manual-shifting capabilities. The GS F also has four different driving modes: Normal, Eco, Sport and Sport S+, the latter designed specifically for the racetrack or your favorite challenging road. As sweet-sounding and powerful as the engine is, the DOHC 32-valve powerplant can offer a measure of fuel efficiency, incorporating the Atkinson cycle in certain driving conditions. The GS F will feature structural reinforcements and an exclusive suspension system matched to the car's added power. The newest member of the 'F' line boasts a level of handling and agility uncommon in a mid-size luxury sedan that was honed on Japanese circuits such as Fuji Speedway and perfected on the famous Nürburgring Nordeschleife. The GS F's impressive track and twisty road manners are the result of a custom firm suspension, along with wider forged wheels shod with staggered Michelin Pilot Super Sport tires (255/35-19 front, and 275/35-19 rear). The suspension combined with an enhanced braking system relying on 15-inch front rotors that are available with bright orange 6-piston calipers help give the GS F remarkable high-speed handling and braking capability. Carrying over 300 pounds less mass than key German sedan competitors, the GS F offers a near sports car level of nimbleness and agility. These features help provide near-neutral handling balance and a high degree of driver control. Trending News
Photo credit: Lexus
posted on conceptcarz.com 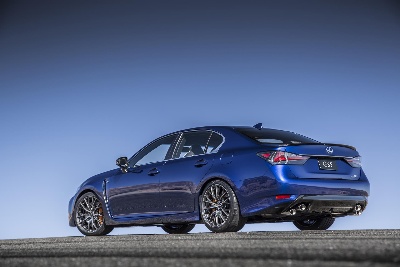 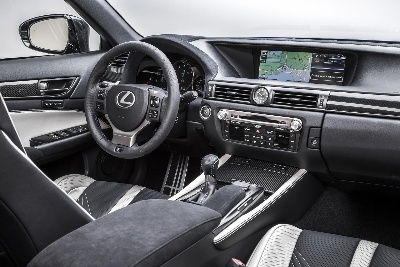