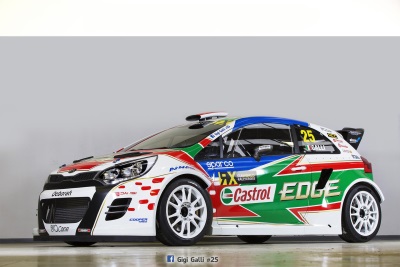 The FIA World Rallycross Championship presented by Monster Energy is delighted to welcome former WRC driver Gigi Galli and Kia Rio to World RX. Both Galli and the all-new Kia Rio Supercar will compete at the upcoming World RX of Italy (16-18 October). The successful rally driver from Livigno, who competed in last year's World RX of Italy, has decided to take one step further in 2015 and compete in a new car. Galli – who narrowly missed out on a spot in last year's Italy RX final – has created his own RX team starting the project with a brand new Kia Rio Supercar, the first of its kind in rallycross. Less than 12 months after his first World RX experience, Galli is now ready for his new adventure thanks to the support of his Italian partners. Giovanni Bernacchini, Galli's co-driver from his rallying days, will join Galli as a key member of his new team.
'I'm delighted to be back in World RX,' explained Galli, who competed in a total of 66 WRC events and scored two podiums. 'My supporters have been pushing for this to happen and combined with my endless passion for racing it has finally happened. I am especially excited about creating a brand new team and car plus it's great to also have Giovanni Bernacchini by my side. We will introduce ourselves at the Italian World RX round at Franciacorta next month. Our aim is not to win, it would be foolish to think we could do that straightaway – we simply want to demonstrate how hard we have worked so far.'
posted on conceptcarz.com
Loading...
Loading...
Loading...
Loading...
Loading...
Loading...
Loading...