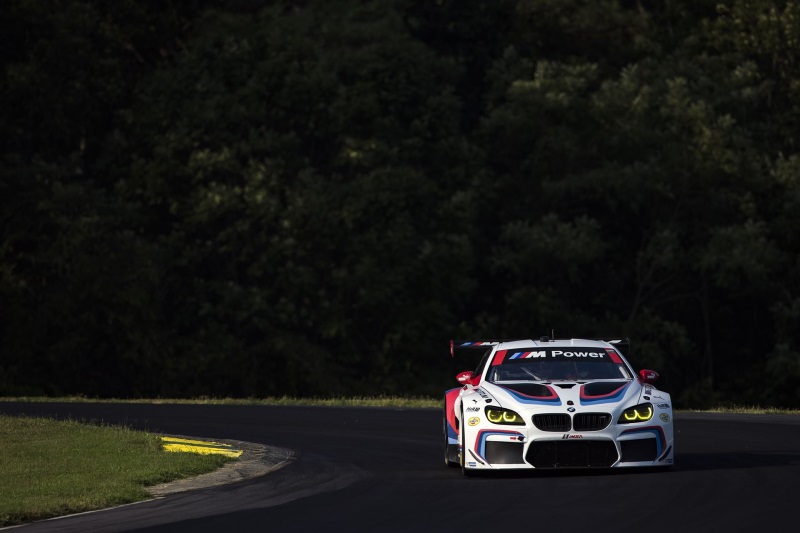 September 20, 2017 by Mazda
Woodcliff Lake, N.J. – Sept. 20, 2017… BMW Team RLL heads to Mazda Raceway Laguna Seca, in Salinas, Calif., for the penultimate round of the 2017 IMSA WeatherTech SportsCar Championship and the two-hour-and-forty-minute America's Tire 250 race, part of the Continental Tire Monterey Grand Prix weekend. The 2.238-mile, 11-turn circuit (lengthened from 1.9-miles in 1988) on the Monterey Peninsula has hosted sports car races since 1957 and is a favorite of BMW Team RLL principal Bobby Rahal. Rahal scored four consecutive Champ Car victories at Laguna Seca beginning in 1984 and, in his honor, the straight betweens turns six and seven was named the 'Rahal Straight' in 2003. BMW Team RLL has also found success at MRLS, capturing one win, four seconds and two thirds since 2009, the team's first season racing for BMW. The victory came in 2015 with John Edwards and Lucas Luhr driving the No. 24 BMW Z4. The car raced that season in a distinctive black livery and, beginning at Laguna Seca, the No. 24 M6 will race in black for the final two races of the 2017 season. This year, a mid-season run of six podium finishes by the team, including two wins by Bill Auberlen and Alexander Sims, has BMW standing third in GTLM Manufacturer points. Despite losing almost certain victory in the closing minutes at VIR due to a punctured tire, Auberlen and Sims stand second in Driver points, 16 markers from first. Teammates John Edwards and Martin Tomczyk stand seventh in Driver points. 'We are very much looking forward to going back to Laguna Seca, one of my favorite circuits,' said Bobby Rahal, Team Principal. 'As a driver and team owner, we have had a tremendous amount of success there over the years whether it was IndyCar racing, sports car racing, Can Am or you name it. As recently as 2015, when John Edwards did a great job in traffic to really cap it off and win the race with a 1-2 finish, we've had success at this legendary racetrack. This year has obviously been a much more competitive year for us than last year so we are optimistic of bringing home a good finish. BMW Team RLL has delivered some strong finishes at this track in the past few years and will be in the hunt for a win this weekend. Certainly our VIR results did not help our championship hopes but there are two races coming up that should play to our strengths with Laguna Seca and Petit Le Mans, a tough, long race where anything can happen.' Bill Auberlen, driver No. 25 BMW M6 GTLM: 'We have been in position to win the last two races, but haven't for one reason or another. We're still second in the points but we should be leading so that's a little frustrating.'
Alexander Sims, driver No. 25 BMW M6 GTLM: 'As with every race so far this year I am thoroughly looking forward to learning a new circuit and driving our M6 GTLM through the famous corkscrew. We had excellent pace at the last round in Virginia and hope we can carry some of that over to Laguna. I know the BMW Team RLL has been working very hard to keep improving and give us the best possible chance to fight at the front.'
John Edwards, driver No. 24 BMW M6 GTLM: 'We're back in black this weekend, so I'm reminded that the last time I drove a black BMW at Laguna Seca, we were on top of the podium with a BMW 1-2! Hopefully we can repeat that feat this weekend. The track is probably the most picturesque that we go to and the elevation there does not disappoint. It's been a long break since VIR so I'm ready to get back to racing.' Martin Tomczyk, driver No. 24 BMW M6 GTLM: 'Laguna Seca will be great to drive for me. As a kid I was always driving this track on my Playstation, knowing that I would drive it someday. Now it's the time to race there together with John, BMW Team RLL and the BMW M6 GTLM. I hope we will be as successful as I was on the console years ago.' The America's Tire 250 takes the green flag at 2:05 p.m. PT Sunday, Sept. 24. FOX Sports 1 will broadcast the race live beginning at 5:00 p.m. ET. Follow BMW Team RLL on Twitter at @BMWUSARacing for 'from-the-pit-box' updates all weekend.