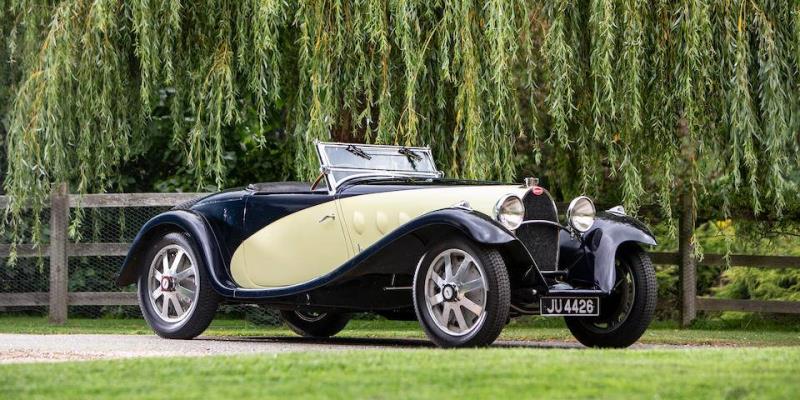 Bugatti Flies The Tricolore At Bonhams

February 7, 2020 by Bonhams
Unique Type 55 is most valuable auction lot sold during retromobile week A magnificent 1932 Bugatti Type 55 Roadster– one of the most important sports cars of Bugatti's golden era - was the star lot in the Bonhams Grand Palais Sale, selling for an impressive €4,600,000 – the most valuable lot across all the collectors' motor car sales taking place in Paris this week. Bonhams' first European auction of the year realised a total of €20 million (€19,693,000), its best ever result in its Grand Palais location. The rare example (one of only 29 surviving) of a early French supercar was the subject of much pre-sale attention, being its very first appearance at auction, following an incredible 56 years in the ownership of renowned British Bugatti connoisseur, the late Geoffrey St John, and lately of his niece, Dr Alissar McCreary. In the palatial Parisian saleroom, it was the subject of a serious yet spirited three-way bidding battle in the room before being sold to a Swiss Bugatti collector, whose final bid earned applause from the room. Philip Kantor, Bonhams Director European Board, said: 'We were extremely proud to have been entrusted with this exceptional and historic sportscar. It presented a once in a lifetime opportunity to buy one of the most important examples of the golden age of automotive craftsmanship and performance and we are thrilled for both Dr McCreary and for the new owner.' In its early life, the Bugatti was raced at Le Mans by two of the era's greats, Louis Chiron and Count Guy Bouriat-Quintart, before being reconfigured by celebrated Parisian automotive designer Giuseppe Figoni, who created its unique coachwork. In its new guise, it became the overall winner of the 1933 Paris-Nice rally, with its second owner, French publisher Jacques Dupuy. The Bonhams Grand Palais Sale is renowned for successfully selling pre-war Grand Marques and so it is no surprise that another top seller from today's sale included a 1931 Invicta 4½ litre S-Type Low Chassis Sports with unique 'sport cabriolet' coachwork by Carbodies which achieved a world auction record for the marque, selling for €1,610,000. Other highlights included: - 1935 Mercedes Benz 500k Cabriolet A – sold for €1,610,000. The 500K was a supercar of its day, designed by in-house coachworks Sindelfingen and engineered by Hans Nibel, who created the chassis for the first legendary 'Silver Arrows' racing car. One of only 31 Cabriolets built, this example was delivered new to the celebrated French film actor of the era, Henry Garat.
- 1963 Mercedes-Benz 300SL Roadster sold for €1,033,333. One of only 200 Roadsters built with disc brakes and an all-aluminium engine, offered with a factory hardtop.
- 1934 Talbot AV105 Brooklands Sports Racer, sold for €879,750. A victor at the celebrated Brooklands circuit in the hands of noted racer Dr Roth and the Talbot's ace' works driver WM 'Mike' Couper and more recently, the overall winner of the 2013 Flying Scotsman Rally. - 2009/2019 MAT New Stratos Coupé, sold for €690,000. The first of a limited run of just 25 new-generation Stratos, inspired by the legendary 1970s Lancia rally car, featuring a 540bhp 4.3-litre V8 engine, and a Ferrari 430 Scuderia chassis, and the first example to be offered at auction. James Knight, Bonhams Group Motoring Chairman said: 'This has been an excellent start to our European calendar, which this year also features our popular Monaco Sale, as well as a return to Bonmont after last year's exceptional auction, plus an exciting new location which will be announced shortly.'