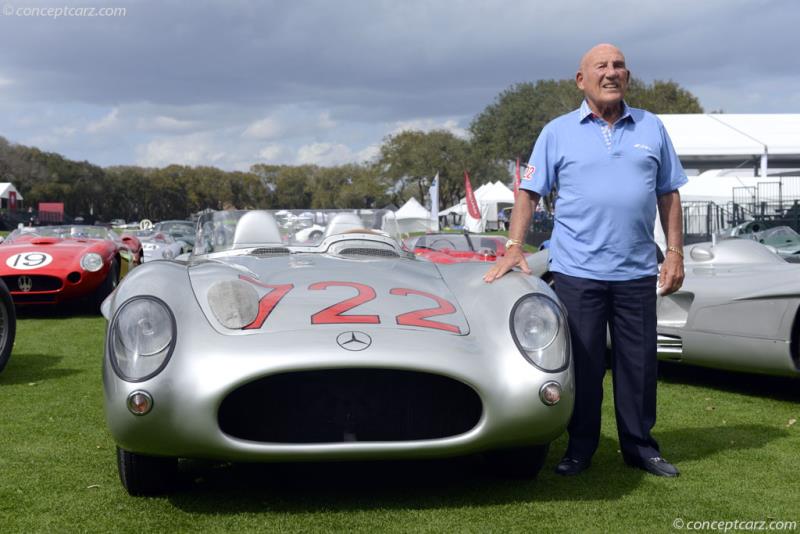 April 13, 2020 by Dan Vaughan
Five years ago, Sir Stirling Moss was the Honoree at the 20th annual Amelia Island Concours d'Elegance. He was the honoree of the first Amelia Island Concours in 1996 and the only person to be honored twice by 'the Amelia.' Several of the 84 cars he raced in period were assembled to honor his many accomplishments during his racing career. Taking center stage were the Mercedes-Benz racing cars that brought him his greatest fame.
On May 22, 1955, Moss and navigator Denis Jenkinson won the Mille Miglia to score Mercedes-Benz's first victory of the World Sports Car Championship season. The 1,000-mile road race traversed around the Italian peninsula and took Moss nearly ten non-stop hours to complete, setting a speed record that still stands.
Mercedes-Benz would withdraw from competition less than a month later following the terrible accident at the 24 Hours of LeMans involving one of the team's 300 SLRs and an Austin-Healey. Moss and his co-driver, reigning World Champion Juan Fangio, were leading by nearly three laps when the decision to withdraw came from Germany. Had Moss won, he would have been the first and only man to win the Mille Miglia and the 24 Hours of Le Mans in the same season. 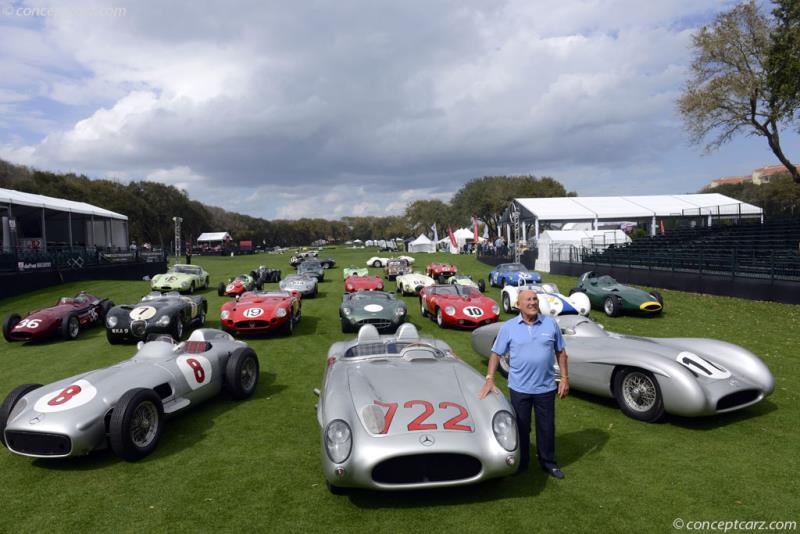 Sir Stirling won his home Grand Prix at Aintree, England in July 1955 driving the 300SRL's stablemate, the Formula 1 Mercedes-Benz W196. In October, he clinched the World Sports Car Championship for Mercedes-Benz winning the Targa Florio racing the same 300SLR that had carried him to victory in the Mille Miglia and the Tourist Trophy in Dundrod, Ireland. Between 1955 and 1961 Moss finished as championship runner-up four times and in third place the other three times. His racing career spanned from 1948 to 1962, winning 212 of the 529 races he entered. He raced in 84 different makes of cars during that time but preferred the cars of his home country stating, 'Better to lose honorably in a British car than win in a foreign one'. 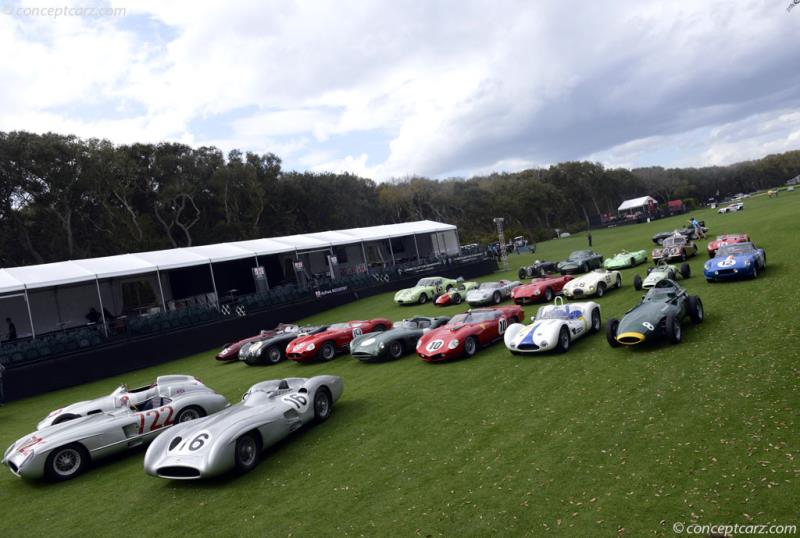 Moss raced at the 24 Hours of Le Mans every year from 1951 through 1961 with two 2nd place overall finishes and a 1st in class. He raced at the 12 Hours of Sebring from 1954 through 1962 with a 1st place finish in his inaugural year, driving an Osca MT4 1450. He placed 2nd at the 1952 Rallye de Monte Carlo, his first of three attempts at the race.
After retiring from racing in 1962, he became a broadcast commentator on Formula 1 races, a brand ambassador, and a participant in historic races. He was often seen at paddocks and show fields around the world, and his presence will surely be missed.
Moss passed away on Easter Sunday at his Mayfair, London home at the age of 90, with his wife Susie, the Lady Moss, by his side. 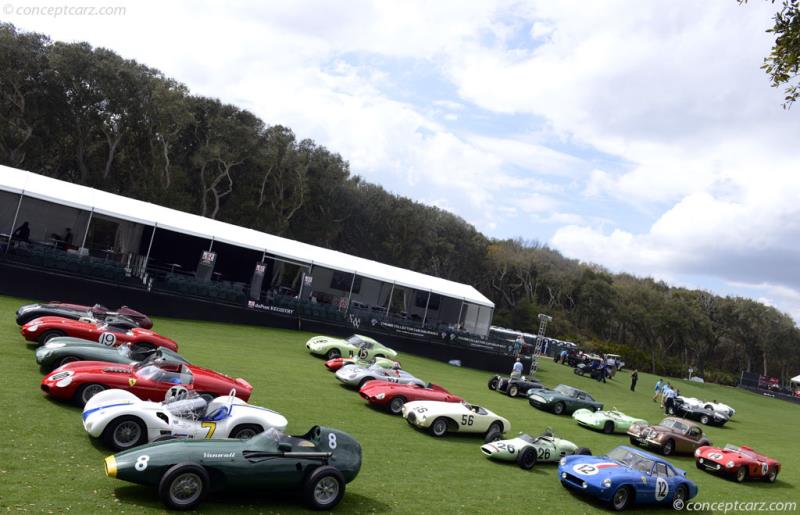 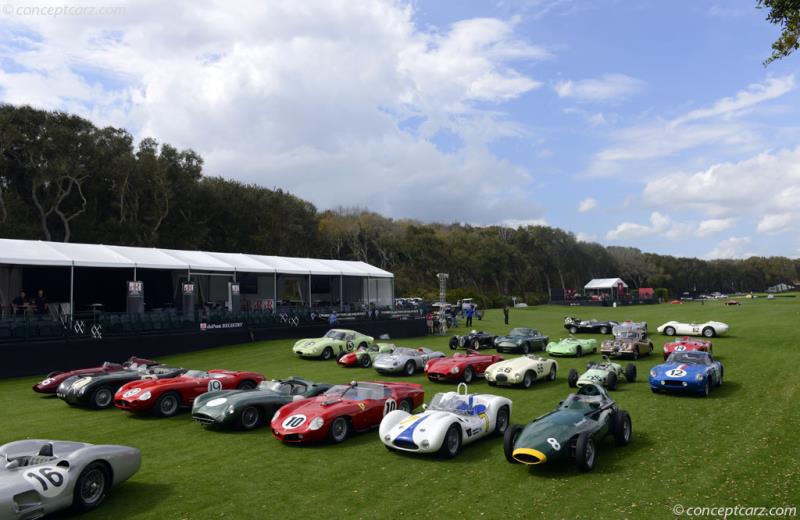 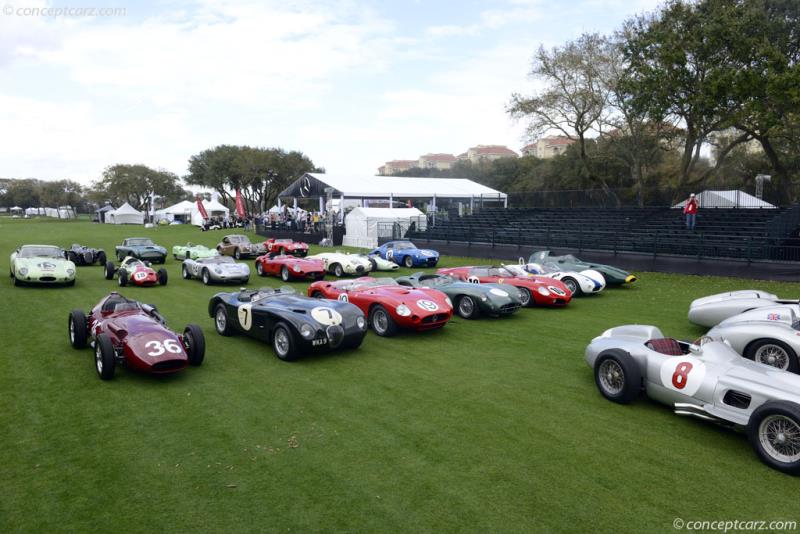 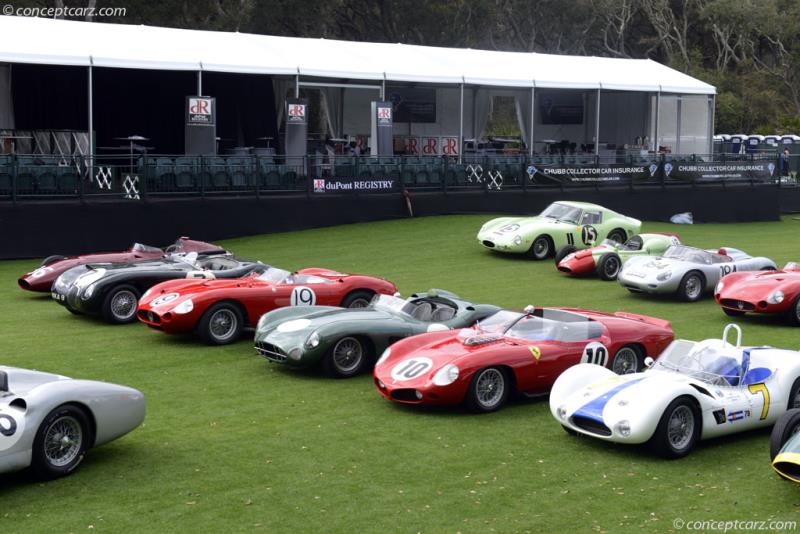 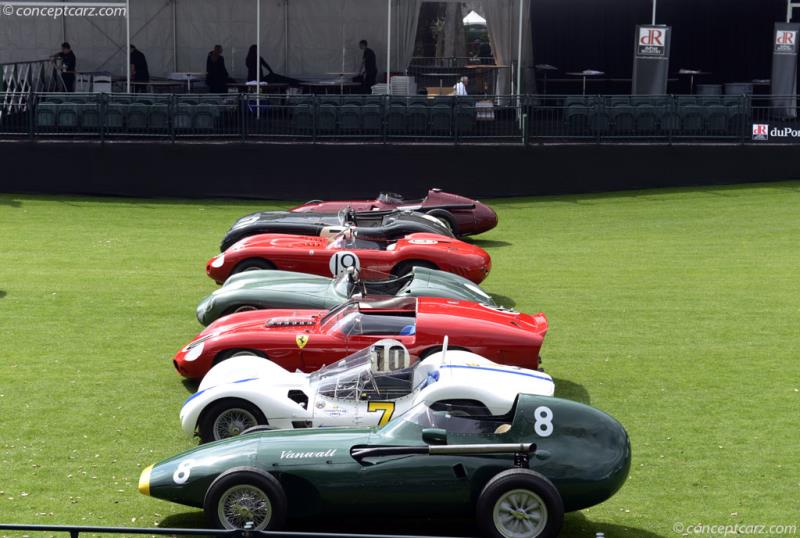 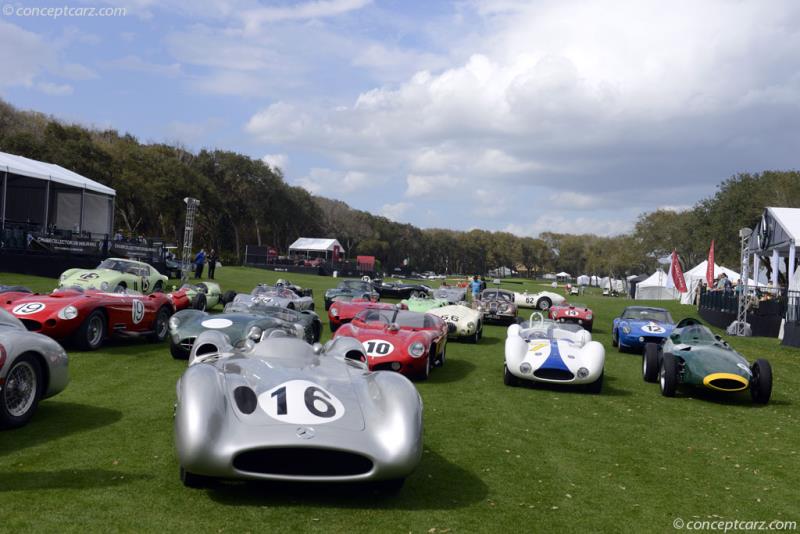 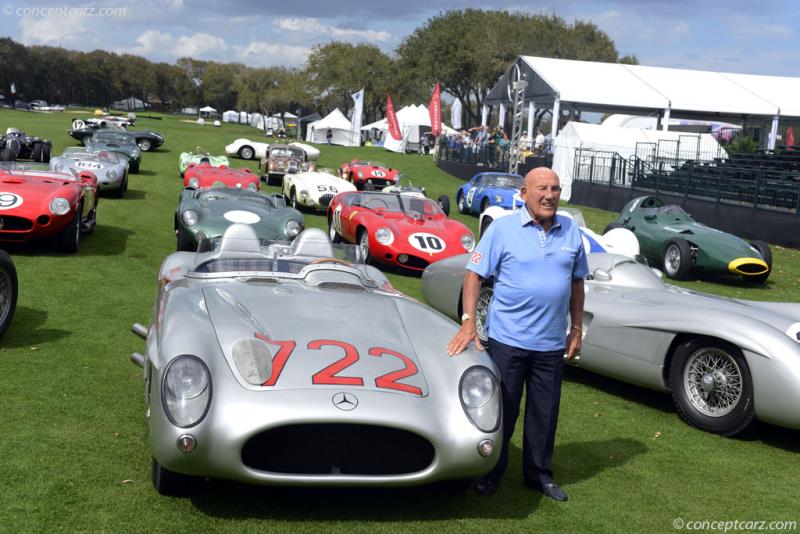 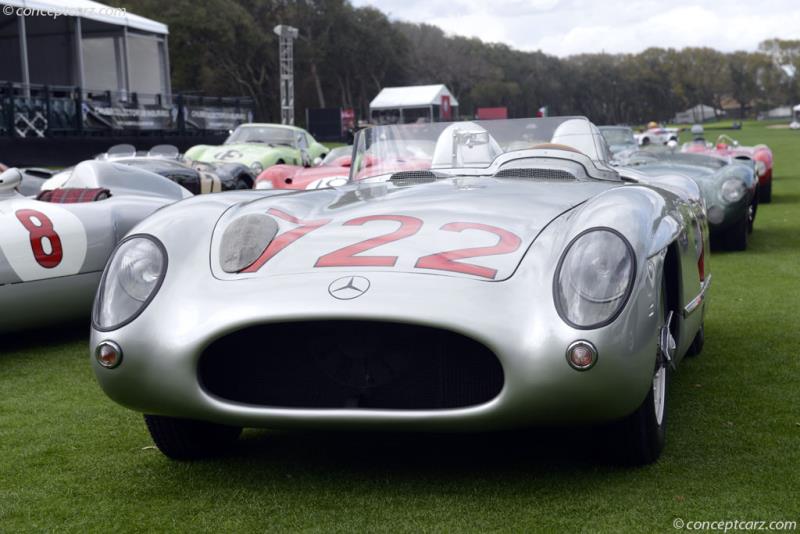 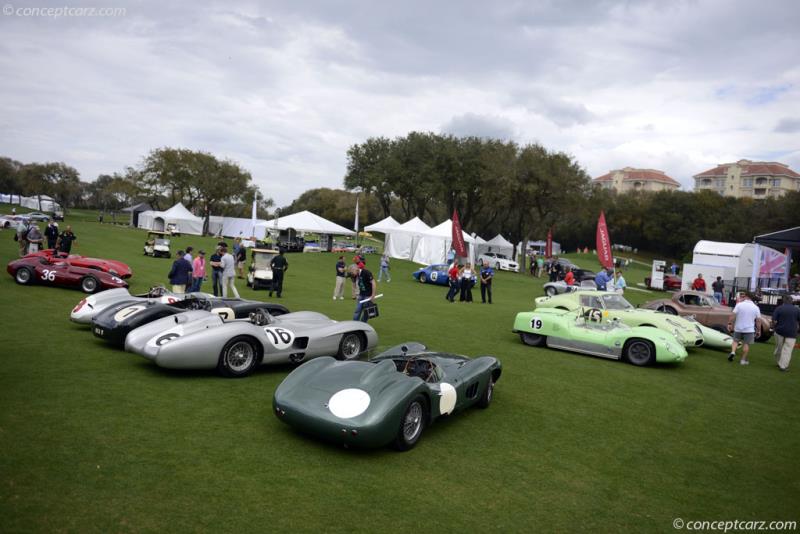 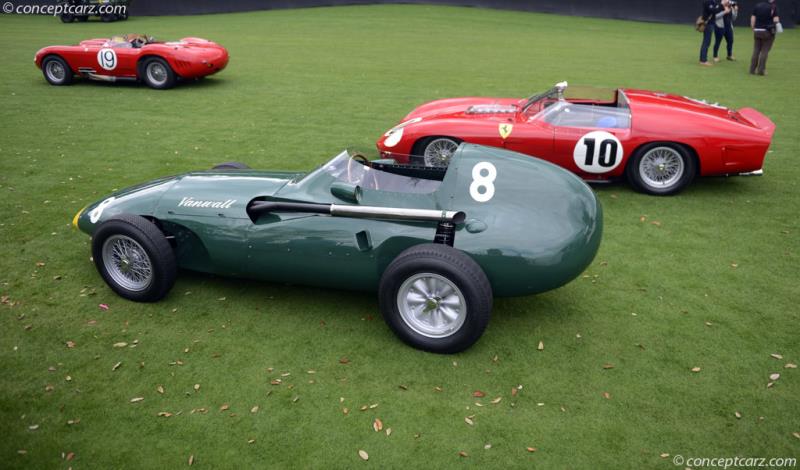 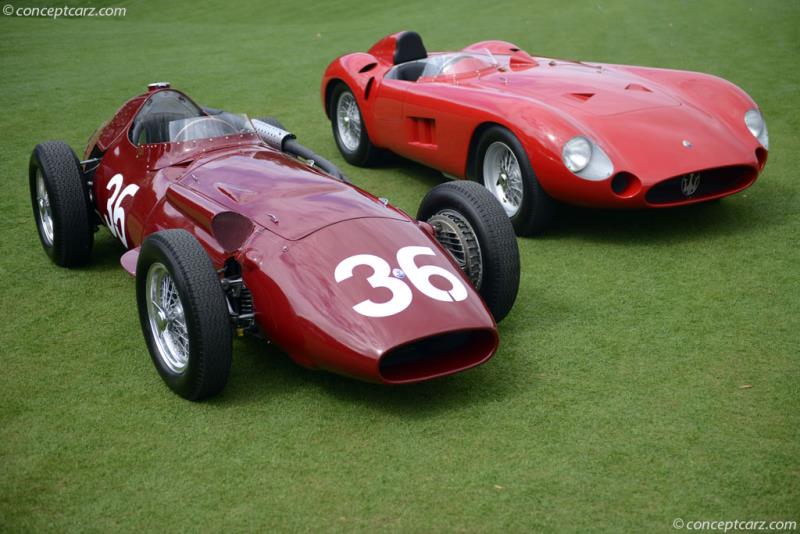 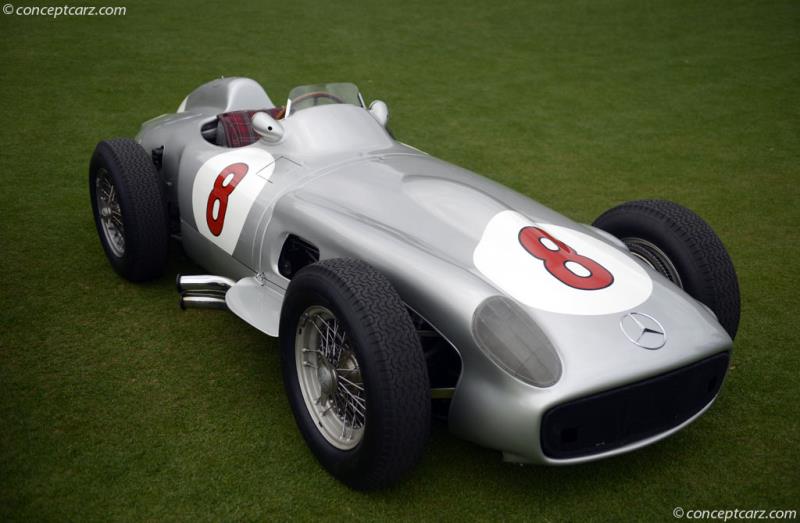