The Volkswagen Type 181 – commonly referred to as 'The Thing' – has always been a fun summer classic for drivers who enjoy a cool and wildly original type of ride. The removable doors, retractable soft top and folding windshield provided a driving experience unlike any other Volkswagen. The 181 has also spawned one of the more unusual models ever to wear the Volkswagen badge – the Acapulco Thing. The Thing variant was specifically designed for two legendary, high-end resorts in Acapulco, a popular resort city in Mexico and destination du jour for Hollywood A-list celebrities in the 1960s and 1970s. As the Thing was assembled in Puebla, Mexico, the oceanfront hotels used the boxy beach cruiser to shuttle wealthy vacationers from the airport and the city's sun-kissed shoreline. The Acapulco Thing's popularity among the hotel's ritzy, jet-setting clientele led Volkswagen to produce a limited run of the resort cruiser – about 400 cars in total – from May to July of 1974. Most of the Acapulco things were painted Blizzard White with blue accents on the rocker panels, running boards, bumpers and dashboard, although Volkswagen also made versions with orange, red and yellow base colors. The car had removable side curtains on all four of its doors, and its seats were upholstered with blue nautical stripes, adding to its coastal look. The Thing's regular soft top could also be replaced by a seat-matching vinyl surrey top on a special high-profile tubular frame. Available accessory options for the car at the time of purchase included a welded steel roll cage, a detachable fiberglass hardtop (with luggage rack), an outside spare tire carrier, a front bumper push bar, electric winch, a radio, front and rear trailer hitches, chrome sport wheels and under-dash air conditioning. Like its Thing siblings, the car was powered by a rear-mounted air-cooled 1.6-liter flat-four engine, paired to a four-speed manual transmission.

Over time, the Acapulco Thing has become both a collector item and template for Thing restoration; a true, verifiable Thing in decent condition can be hard to come by and could typically fetch well north of $10,000. But as the ID. BUGGY concept demonstrates, there is plenty of potential for new, unique, and exciting open-air driving experiences in Volkswagen's future.
Photo credit: Volkswagen
posted on conceptcarz.com 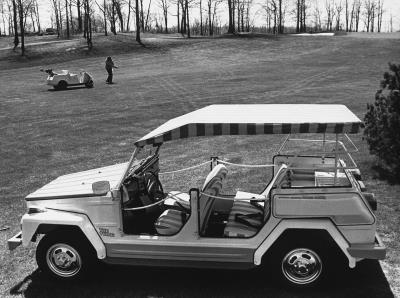 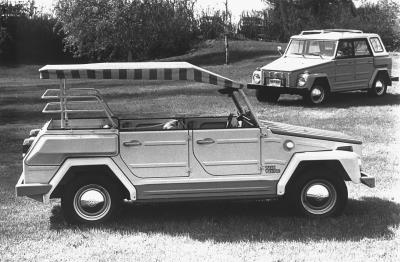