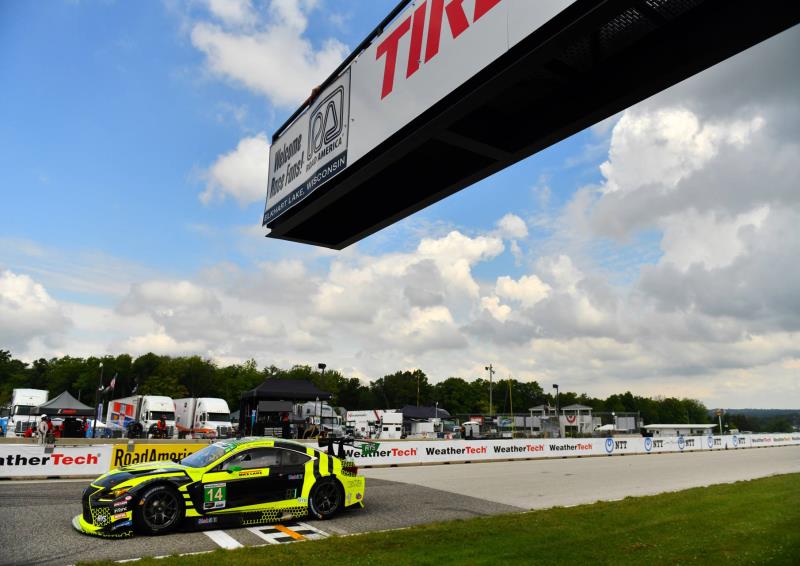 August 4, 2020 by Lexus
•AVS Scores Third Straight Win, Double-Podium Finish PLYMOUTH, Wis. (August 3, 2020) – Townsend Bell and Frankie Montecalvo earned the third consecutive win for AIM VASSER SULLIVAN (AVS) in the No. 12 Lexus RC F GT3 in Sunday's IMSA WeatherTech SportsCar Championship race at Road America. Bell battled in the closing laps under rainy weather conditions to score the first win in the Lexus RC F GT3 for the driver duo. The race was halted for nearly 22 minutes due to inclement weather before restarting for the final few laps. Along with the win for the No. 12 Lexus, Jack Hawksworth and Aaron Telitz recorded their third straight podium finish in the No. 14 RC F GT3 with a third-place result in Sunday's race at the Wisconsin road course. Hawksworth and Telitz came into Sunday's race with back-to-back victories at Daytona International Speedway and Sebring International Raceway. 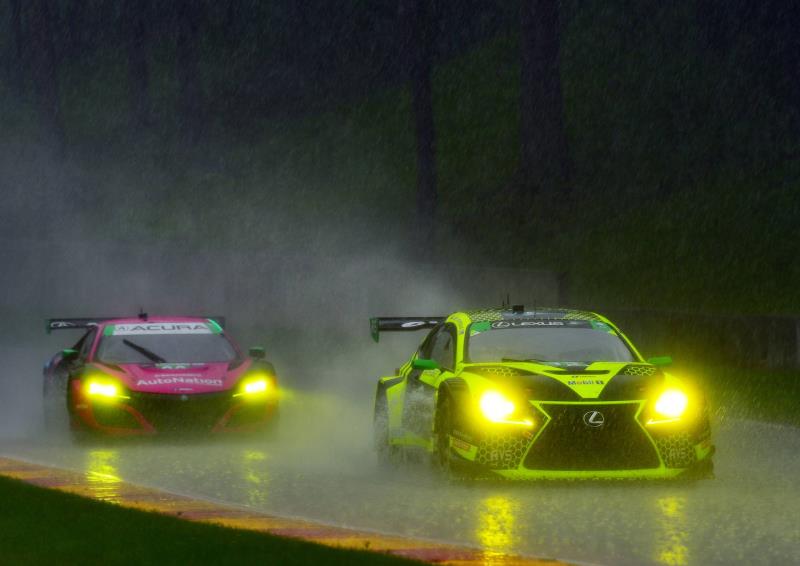 Telitz, a native of Birchwood, Wisconsin, led the GTD field to the green flag in the No. 14 Lexus RC F GT3 after earning his first career IMSA pole position on Saturday. Montecalvo started the race second in the No. 12 RC F GT3 and held his position prior to a driver change to Townsend Bell on lap 22. Telitz led all 23 laps of his stint before turning driving duties over to Hawksworth on lap 23, who came back on the track in the lead just before his AVS teammate Bell passed him in the No. 12 Lexus. Bell went on to lead 32 laps en route to the victory. Bell lost the lead heading into the final lap, but was able to regain the top spot in turn 11 of the 14-turn, 4.048-mile road course to register the win. The win marks the first time in IMSA GTD competition that the Lexus RC F GT3 has won three straight races. It is the fifth victory for AVS in their second year of IMSA competition and the third career IMSA win for Bell, the first for Montecalvo and their first win behind the wheel of the Lexus RC F GT3. Lexus currently leads the manufacturer championship points in both the overall and Sprint Cup standings. 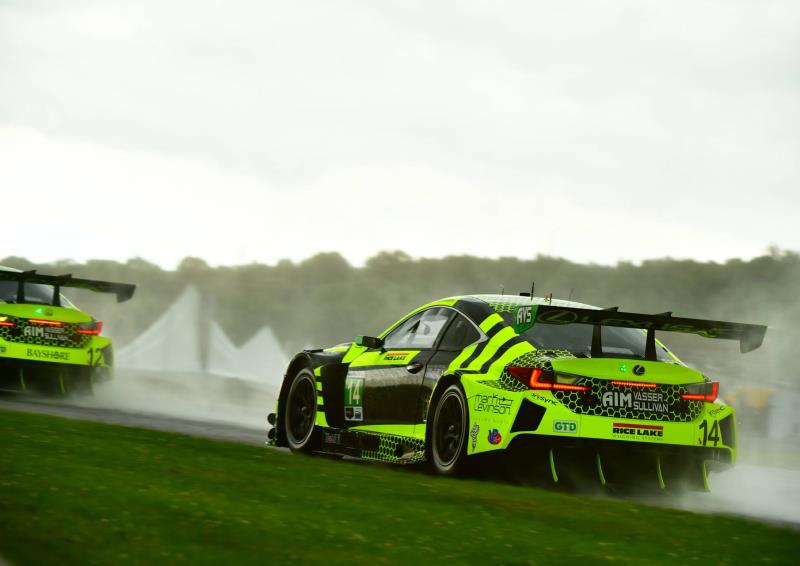 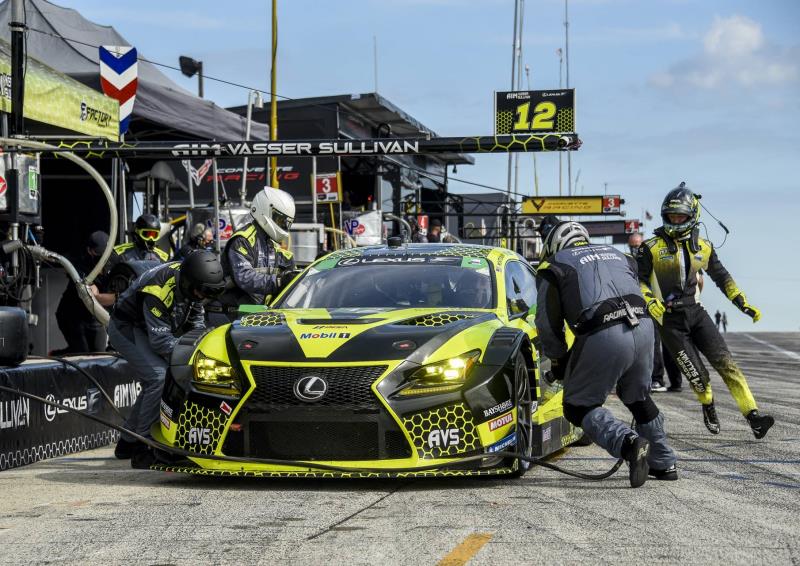 Can you tell us about those final laps? 'Mario Farnbacher was coming. We know he's really good in the wet conditions. We've that seen before. It was so treacherous on those last few laps. He (Mario) got by me and then I kind of hung onto him and then he sent it off into the kink. There was standing water everywhere. I was just grabbing gears wide open and my Lexus hooked up and there we were in the lead. Treacherous conditions for sure. We needed a win. Frankie (Montecalvo) has been doing such a good job on the starts and has been giving me such a good car. I felt like today was our day. Proud of everyone at AIM VASSER SULLIVAN.' What was your mindset in the closing laps? 'There was a lot going on in those last three laps. The red flag came out and I thought there's no way we're going back to green, but we had to get back in and get back out there. The first lap, to be fair, was okay. The Michelin's were incredible in those conditions and then the skies just opened up. It was particularly bad in the carousel and in the kink. (Mario) Farnbacher was going big around the outside and got by and then we kind of hung in there. I was coming out of the carousel, looking up the road and there he is sliding off in the kink out in the grass, near the wall. I hit that standing water and I thought I was going to lose it and for a split second I thought I was just going to lift and coast. I just put my foot down and started grabbing gears basically and the Lexus got by him. That's all it took and then the yellow came out there. Just kind of hung in there, tried to play it smart and a great strategy from the team. Frankie (Montecalvo) has just been doing an incredible job on his stints giving me a chance to contend each time. We're thrilled.' How big is it for the 12 Lexus team to get the win after your teammates have won the last two? 'It's been really satisfying for the team to have the one-two qualifying and the one-two finish, but quietly we get a little frustrated because we want a chance at the top step, too. The key moment of the race for us other than that last crazy lap in the rain with (Mario) Farnbacher was with the pit stop where we did the driver change. I think they (No. 14) had a little issue and when Jack (Hawksworth) came out of the pits I got by him exiting turn 3. I had a run and I knew that was my chance. If we didn't make it happen there, it was probably going to be tough to get something done. I got the position and just settled into a good pace and off we went.' FRANKIE MONTECALVO, No. 12 Lexus RC F GT3 What does it feel like to be in victory lane with the No. 12 Lexus RC F GT3? 'It's great. It's perfect for this whole 12 car and excited for the crew. The AIM VASSER SULLIVAN did a great job with our Lexus RC F. We were fast in qualifying and fast in the race and did a great pit stop strategy and it paid off.' What does it mean to get your first IMSA victory? 'Me and Townsend (Bell) have been trying really hard to get this win for the 12 car. It's great for the guys. Everything worked out for us in this race. It feels amazing. I think they made a phenomenal call in the pits right at the perfect time. It was a great race for us.' JACK HAWKSWORTH, No. 14 Lexus RC F GT3 Can you talk about today's race? 'First off, congratulations to the 12 car for the victory today. It's great to see Lexus and AIM VASSER SULLIVAN win three in a row. It's the first time it's ever happened in GTD so a great accomplishment. Our race was obviously not quite as successful, but still on the podium. We faced some adversity throughout the race. We had some issues and then the visibility was poor after the final race restart. All in all, not a good day but we came away with a good result.' AARON TELITZ, No. 14 Lexus RC F GT3 How was your race? 'Any day at Road America is a great day. To finish on the podium at my home track was great. That felt really good after a bit of a tough day for us. I had a good stint. Things went really well. Our Lexus RC F GT3 was running strong. I pulled out a good gap and I had a bit of a dodgy in lap with some GTLM traffic and that just set us back a little bit right before Jack took over. When you feel like you had a bad day and you finished third, I think that's still a really good day. Stoked about that and happy to be on the podium in my home race. Congratulations to the 12 AIM VASSER SULLIVAN team on the victory today.'