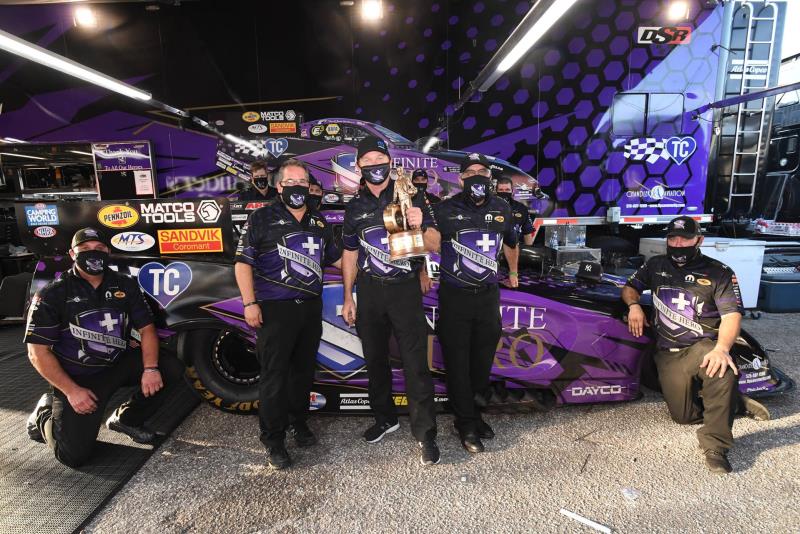 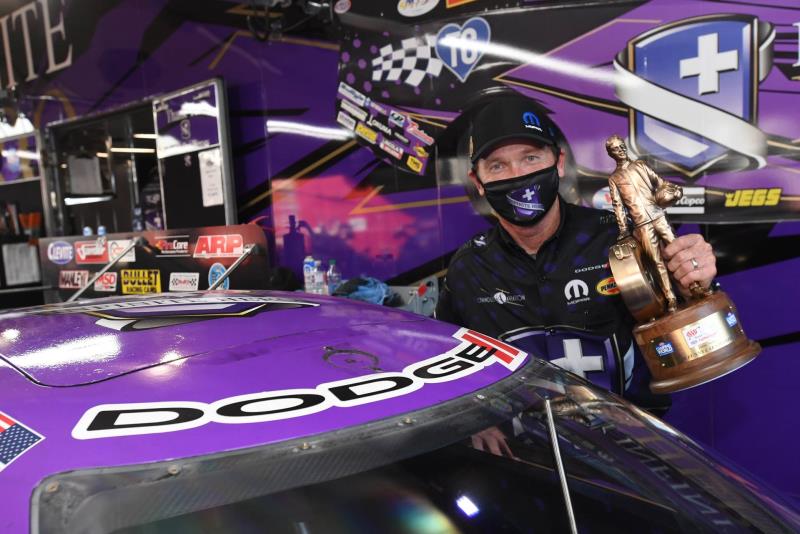 •Mark Pawuk takes his Mopar Drag Pak to two holeshot wins and a semifinal appearance in Factory Stock Showdown to remain second in the championship
Don Schumacher Racing (DSR) wheelman Jack Beckman earned his third win of the 2020 National Hot Rod Association (NHRA) Drag Racing Series season at 35th annual AAA Texas FallNationals over Funny Car points leader Matt Hagan in an all-Dodge final. The win by Beckman extends his team's undefeated streak to a NHRA record 12 consecutive Funny Car victories which DSR has maintained since last year's event at Texas Motorplex.
Beckman made his way to the final elimination round by defeating Cruz Pedregon, Tim Wilkerson and Bob Tasca. He scored his first-ever victory at the Dallas track earning a Wally trophy, the 33rd of his career, and the track's signature cowboy hat with a 0.070-second reaction time and 3.908 second pass at 328.46 mph to out run Hagan's 0.069-sec. start and 3.943 sec./324.20 mph effort. 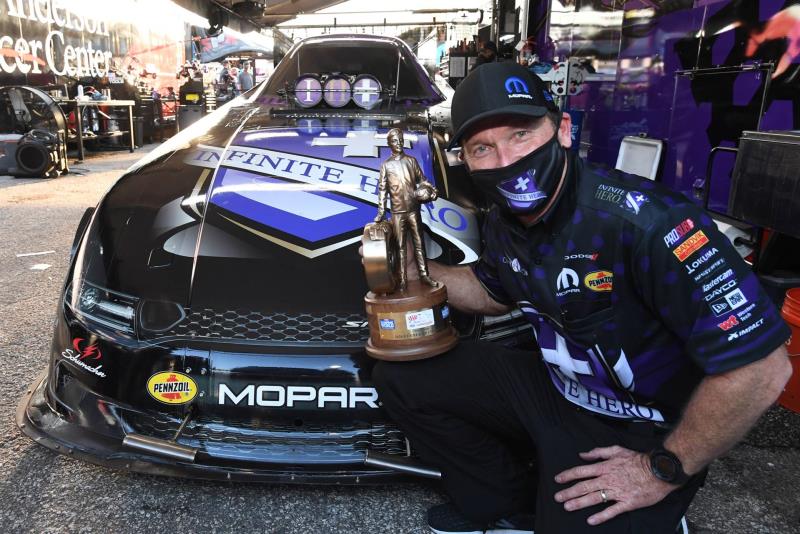 'Maybe the best weekend ever,' said Beckman. 'I mean doubling up at Indy in 2015 is going to be awfully hard to exceed, but I so wanted to win at Dallas. My dad (Bob Beckman) lives close to here and he's been supporting me my whole career and he's 83-years-old. That might have been my last shot at Dallas and it's going to be extra special to give him that cowboy hat from the (Texas) Motorplex. It's perfect. I don't know that I've ever had a better weekend at a drag strip than this.' With just two national events remaining to determine a Funny Car world champion, the victory keeps the Infinite Hero Dodge Charger SRT Hellcat driver within four markers of the category leader Hagan and also keeps fans guessing as to which of the four DSR drivers might take the crown as Tommy Johnson Jr. and Ron Capps also remain in the mix. From his No. 1 seeded position on the eliminations ladder, Hagan drove his special edition Pennzoil paint scheme Dodge Charger SRT Hellcat through eliminations with wins over Todd Simpson, J.R. Todd and teammate Capps to advance to his fourth final round appearance of the year. Despite the loss to Beckman, Hagan's runner-up finishes in back-to back events have helped him maintain the points lead. 'All-in-all another really good day here at Dallas for this Pennzoil/Mopar team,' said Hagan who made his third final round appearance at Texas following wins in 2016 and 2019. '(Jack) Beckman just had a little better day. They have a great race car, but we have a great race car too. We've been keeping pace and we're going to keep doing our thing for the next two races and see how this thing plays out. I'm super excited we get to do it again in a few days at Houston next weekend. We have a lot of momentum. The team is working great. The guys are doing a great job. We just have a little more work to do.' Winner of the Mopar Express Lane NHRA Midwest Nationals near St. Louis two weeks ago, No. 2 seed Johnson Jr. was looking to go rounds in his MD Anderson Dodge Charger SRT Hellcat and keep the battle for the championship as close as possible heading into the final two races of the season that will conclude with a 'points-and-a-half' format at the season finale. Unfortunately, Johnson saw his racecar lose tire adhesion in the quarterfinals against Bob Tasca and lost a little traction in the points as well while remaining third in the standings. From his fourth place position on the ladder, Capps joined his teammates Beckman and Hagan in advancing to the semifinals aboard his DSR Dodge Charger SRT Hellcat in order to gain valuable points. His day came to a disappointing end after his (0.067-sec.) 3.958 sec./ 318.84 mph effort wasn't enough to halt Hagan's (0.062-sec.) 3.907 sec./326.08 mph run. From her fifth place position on the Top Fuel eliminations ladder, Leah Pruett took her Dodge Charger SRT Hellcat Redeye for a hotshot win against Scott Palmer in the first round to advance to the next round and keep her championship hopes alive. However, a quarterfinal loss to Shawn Langdon thwarted her plans to make any gains in the points, but she still maintains her third place position in the Top Fuel standings behind Steve Torrance and Doug Kalitta. For a fifth time this season, Pruett also doubled up on track time by taking her Mopar Dodge Challenger Drag Pak for some laps in the Factory Stock Showdown (FSS) class alongside teammate Mark Pawuk. While her day was cut short with a first round loss to Arthur Kohn, her teammate had a more productive day. Pawuk drove his Empaco Equipment Mopar Drag Pak to back-to-back holeshot wins against John Cerone and Jesse Alexandra to advance to the semifinals and face FSS points leader Aaron Stanfield. Pawuk's 0.091-sec. reaction time and 7.992 sec./171.58 mph run wasn't quite enough to beat Stanfield's 0.051-second reaction time and 7.976/171.82 pass, but he remains second in class. NHRA competition will head south from Dallas to a second consecutive national event in the Lone Star State and the penultimate of the 2020 season. Rescheduled from its original April date, the upcoming Mopar Express Lane NHRA SpringNationals Presented By Pennzoil will take place at Houston Raceway Park near Baytown, Texas from Oct. 23-25. Two NHRA nitro qualifying sessions are scheduled for Saturday, Oct. 24, at 1:45 and 4:45 p.m. local time. Elimination rounds at the Mopar Express Lane NHRA SpringNationals Presented By Pennzoil are scheduled to begin at 11 a.m. ET on Sunday, Oct. 25, with the television broadcast on FS1 beginning at 2:00 p.m. ET featuring LIVE coverage of the final rounds.