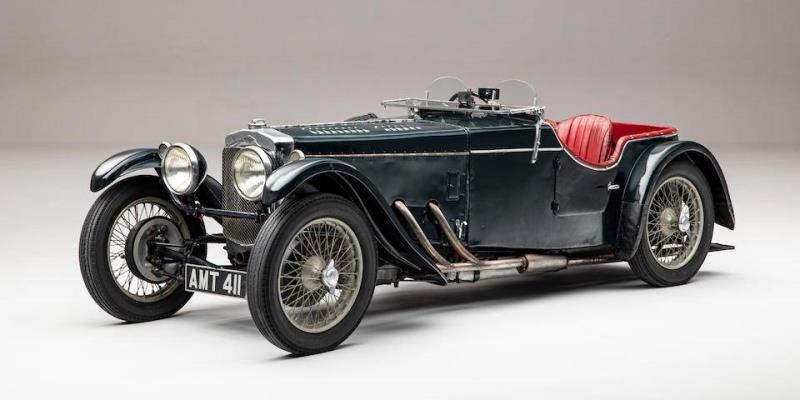 January 25, 2021 by Bonhams
TT REPLICA OFFERED AFTER MORE THAN 50 YEARS' OWNERSHIP One of the most cherished English pre-war sports cars, a 1934 Frazer Nash TT Replica, will be offered to the open market after 50 years at Bonhams Legends of the Road Sale on 19 February, with an estimate of £200,000 – 250,000. The TT Replica was Frazer Nash's most sporting model of the 1930s, with only 85 examples being produced. Named after the short-lived British firm's success in the Northern Ireland Tourist Trophy in 1931 and 1932, the model was aimed at the sporting motorist, especially the privateer racing or rally driver. It was known for its unusual chain-drive axle, allowing rapid clutchless gear changes, and quick steering (one turn lock to lock) which, when combined with the powerful 1.5-litre engine, helped the 'chain gang' model to deliver an outstanding performance in the 1934 International Alpine Trials, with four of the six team cars coming home without any penalties. The same year, the motor car offered by Bonhams was delivered new to keen high speed and reliability trial competitor Hugh Hunter, who specified many special features including twin fuel feeds, larger finned brakes, Scintilla Magneto ignition, Bosch lighting and Brooklands type exhaust. Acquired by the late vendor in 1965, this Frazer Nash was restored the following year, which included fitting a correct and more potent Meadows 4ED engine. This was put to the test in Vintage Sports-Car Club races over many seasons and three Frazer Nash Club 'Riads' (tours) to Bolzano, Italy, commemorating the marque's success in the International Alpine Trials.
Although laid up for the past ten years, the car has been recently recommissioned by marque specialists Blakeney Motorsport. The TT Replica is offered in highly original condition, sporting its original chassis, axles, bevel box, steering box and coachwork.
Rob Hubbard, Director, Bonhams Motor Cars UK, and consigner of the Frazer Nash, said: 'Few pre-war cars carry the same blend of speed and charm as the TT Replica, which is really a 'bucket list' item for any vintage sportscar enthusiast or collector. This is an exceptional period correct example with long VSCC history which we hope will return to historic racing with its next custodian.' This latest consignment joins an exclusive array of exceptional motor cars in the Legends of the Road Sale. Leading the auction is one of the world's most valuable and desirable pre-war motor cars, a 1937 Bugatti Type 57S, which has been off the road for the past 50 years and is offered at no reserve, with an estimate of £5,000,000 – 7,000,000. Post-war motoring masterpieces are represented by a 1960 Aston Martin DB4GT, estimate £1,400,000 – 1,900,000, one of the world's most desirable Grand Tourers, and a 1965 Ferrari 275 GTS, estimate £700,000 – 900,000, considered the marque's first luxury convertible, both offered following decades of single-family ownership. Sholto Gilbertson, Director, Bonhams Motor Cars UK, said: 'The Frazer Nash is a worthy addition to the Legends of the Road Sale offering the perfect collecting combination of rarity and long-term ownership.' The Legends of the Road Sale will be conducted from Bonhams headquarters in New Bond Street, London, following Bonhams' successful Live and Online format, which features the auctioneer on the rostrum with the sale live streamed to a worldwide audience via Bonhams.com. Absentee and telephone bids are also encouraged. Detailed condition reports are available, as are full details regarding history files. Please contact the department and the specialist handling the entry will contact you personally. In addition to the printed catalogue, all lots can be viewed online, and include many extra photographs. Further final consignments of important motor cars are invited for consideration to join this highly curated and prestigious sale. Contact: ukcars@bonhams.com or eurocars@bonhams.com to discuss cars in your collection.