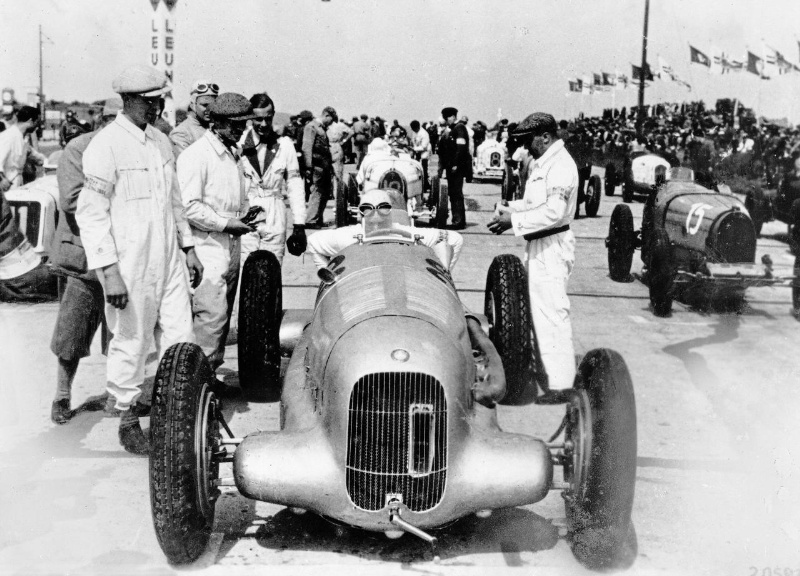 May 23, 2014 by Daimler
•The silver-coloured body of the W 25 gave this nickname to the racing cars from Mercedes-Benz •Successful new development by Mercedes-Benz for the750-kilogram racing formula •Manfred von Brauchitsch drove the W 25 to victory and established a new track record for Nürburgring It was a debut in sparkling silver, and it ended with shining gold: the first race at Nürburgring with the completely newly developed Mercedes-Benz W 25 racing car on 3 June 1934 was won by Manfred von Brauchitsch with an average speed of 122.5 km/h – a new track record. However, the victory was almost outshone by the sensational fact that the new Mercedes-Benz racing car took to the track with its aluminium body in shining silver rather than with the classic paint finish in racing white. According to the legend, the metallic silver skin was only exposed during the night before the race, by grinding off the white paint to bring the starting weight of the W 25 down to the limit prescribed by the race rules. In subsequent years, this first appearance by a Mercedes-Benz Silver Arrow founded a glorious tradition of great motor racing victories with racing cars and racing sports cars that continues to this day. 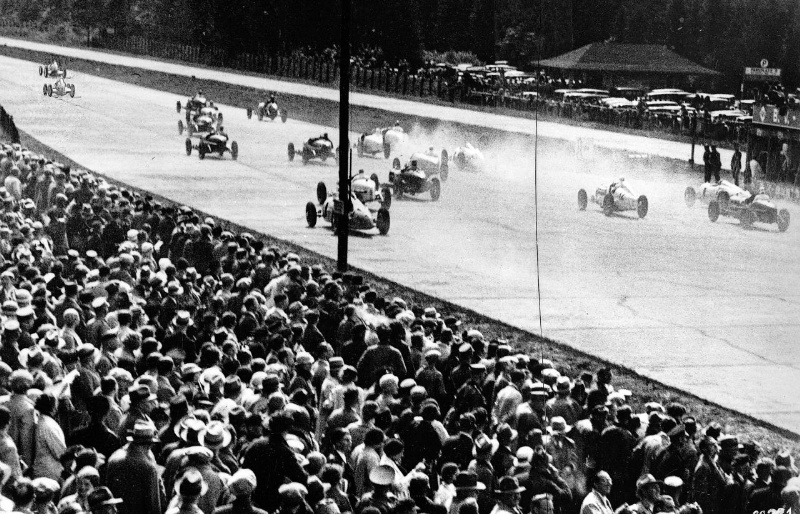 Premiere, victory and track record: the International Eifel Race on 3 June 1934 was dominated by the new Mercedes-Benz W 25. Manfred von Brauchitsch drove to victory at the Nürburgring on the first appearance of the racing car developed from 1933 for the 750-kilogram formula applicable from 1934. Thus began an unrivalled series of successes achieved by the W 25 and subsequent Mercedes-Benz Silver Arrows in the years up to 1939. After the Second World War Mercedes-Benz followed up on these outstanding successes, initially in the 1952 season with racing sports cars, and then with two Formula 1 world championship titles in succession from 1954. A new star on the horizon 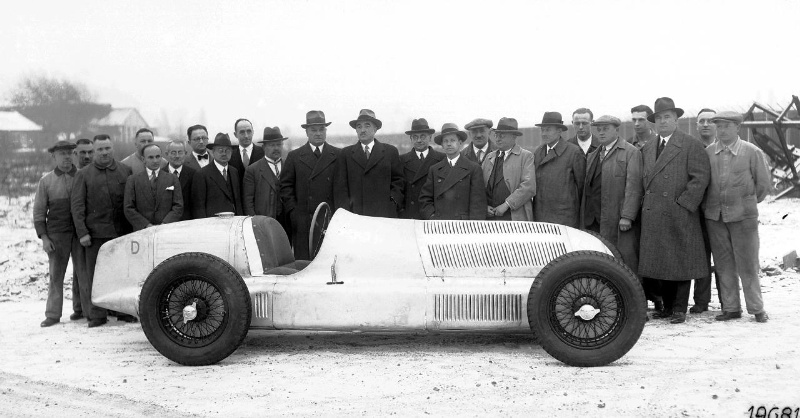 Unemployment and an economic crisis – the year 1932 was not an auspicious time for motor sport activities in Germany. Even the racing department at Mercedes-Benz, whose supercharged model K, S, SS, SSK, and SSKL touring cars had dominated the European motor sport scene in the late 1920s and the start of the 1930s, was closed.
Yet there was hope for the future. Because in autumn 1932 the motor sport authority AIACR (Association Internationale des Automobile Clubs Reconnus) in Paris announced a new formula for Grand Prix racing that would apply from 1934: cars were permitted to weigh a maximum of 750 kilograms without fuel, oil, coolant, and tyres, but there were no other design restrictions. In 1933, Mercedes-Benz decided to develop a completely new racing car for the new formula. The racing team for 1934 was to include Manfred von Brauchitsch, Rudolf Caracciola, Luigi Fagioli, Hanns Geier, and Ernst Henne.
The intention of the AIACR's 750-kilogram formula was to limit the speed of racing cars compared to the previous generation: the rulemakers clearly assumed that only small engines with a low output could be installed in lightweight racing cars. However, they also underestimated the technical advances that had meanwhile been made: the W 25 developed in Stuttgart for the new formula was an extremely powerful racing car. And during the period of the 750-kilogram formula up to 1937 alone, the engine output of Mercedes-Benz racing cars would almost double up to a maximum of 475 kW (646 hp) thanks to continuous further development.

A powerful race-winner Compared to the Auto Union with its mid-engine, the W 25 with a front-mounted engine appeared to be relatively conservative in design. However, this combination of a slim bodyshell, mechanically supercharged 3.4-litre in-line eight-cylinder engine, independent suspension and transmission directly over the rear axle produced an absolute race-winner. This already became apparent during the first test drives in Monza from February 1934, and on the motorway between Milan and Varese. The 235 kW (320 hp) car (later 260 kW/354 hp with a new fuel mixture) achieved top speeds of up to 280 km/h. 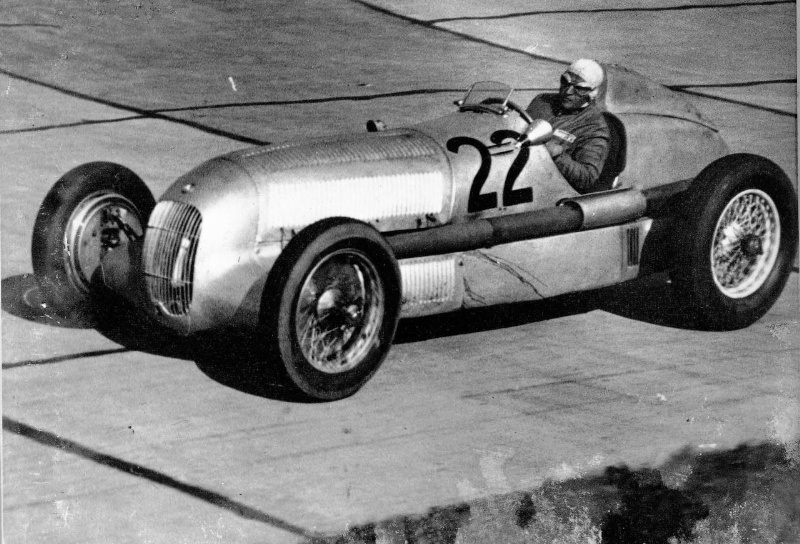 For the W 25, Mercedes-Benz opted for a paint finish in the new silver colour for the first time. How the racing car acquired this livery, which would later give rise to the generic term 'Silver Arrows', is one of the great stories from 120 years of motor sport at Mercedes-Benz: the legend relates that before the race, the new W 25 cars weighed just one kilogram too much to meet the conditions for the 750-kilogram formula. During the evening before the race, racing manager Alfred Neubauer had a brainwave: the white paintwork had to be removed, which would produce the necessary weight saving. In his book of reminiscences 'Men, Women and Engines', published in 1958, Neubauer described the nighttime scene in the pits: 'Throughout that long night, the mechanics scrubbed the beautiful white paintwork from our Silver Arrows. And when they were put on the scales again next morning – they weighed precisely 750 kilos.' Triumph in the Eifel The International Eifel Race at Nürburgring was one of the greatest motor sport events of the 1934 season. On that day in June, the popularity of motor racing as a mass phenomenon became very clear. In his memoirs entitled 'No victory without a fight', published in 1964, Manfred von Brauchitsch remembers the flood of spectators that made the pilgrimage to the Nürburgring: 'Numerous special trains brought the crowds to the small Eifel town of Adenau. Thousands of motorcycles, buses and trucks wound their way along the country roads to the Nürburgring. They came to the Eifel from Frankfurt, Düsseldorf, and Cologne, from the entire Ruhr region, from Munich, Hamburg, and Berlin, in excited expectation of a titanic battle between engines. 200,000 spectators lined the track. Many had already put up tents during the night at the Hatzenbach bend, the 'Carousel', the 'Fox tube', the Wehrseifen valley stretch, and at the 'Swallow's tail', to secure a good vantage point.'