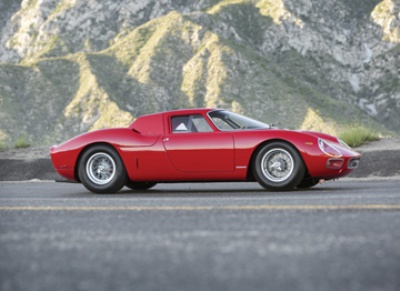 A terrific example of Ferrari's first mid-engine car, the 1964 Ferrari 250 LM on offer was the 19th of just 32 examples built. Completed in July 1964, it was sold new through Luigi Chinetti Motors to Modern Classic Motors in Reno, Nevada, for personal use by dealership owner and casino mogul William Fisk Harrah. Unlike other examples, which were immediately put to competition use, Harrah elected to use the purebred racing car exclusively as a road car. He drove the car sparingly during his two years of ownership, accruing only 800 miles before passing it on to its second owner, Dr. Hart Isaacs, of Beverly Hills, who displayed the car at the 19th annual Pebble Beach Concours d'Elegance in 1969. The car passed through a well-documented string of owners over the ensuing years and was lightly campaigned at various historic racing and concours events, including the Goodwood Revival, before being reunited with its original engine. Recently restored to original factory specifications and certified by Ferrari Classiche, it was shown at the XIII Palm Beach Cavallino Classic in January 2014, where it received The Ferrari Classiche Cup and the award for the most outstanding 12-cylinder Ferrari at the show. A multi-million-dollar entry for RM's upcoming sale, its offering presents a significant opportunity to acquire an example of one of the most legendary Ferraris of all time (Estimate available upon request). 'The 250 LM is an absolutely incredible car—rarer than a GTO, it is truly one of the greatest sports racing cars ever made. I've had the pleasure of driving these cars, and they are downright exhilarating. With the V-12 engine roaring behind you, it is a very poised, balanced, and thrilling ride,' says Max Girardo, Managing Director, RM Auctions, Europe.
'The 250 LM consigned to our Monterey sale is particularly special not only because it's Classiche certified but also because it was driven on open Nevada roads. One can only imagine the sight of that throaty V-12 blaring through the city streets, past the typical American cars of the mid-1960s, wearing Nevada license plates no less. It's a great privilege to offer this legendary Ferrari at our upcoming Monterey auction, where we expect it will comfortably rank among the top sales of the week,' Girardo adds.
Cementing RM's global leadership in the presentation of Ferraris at auction— holding seven of the top ten all-time auction records for the marque—the 250 LM will be joined in Monterey by the previously announced 1967 Ferrari 275 GTB/4 formerly owned by Steve McQueen, along with no less than 24 other exceptional examples. Additional recently secured highlights include a pair of magnificently restored gran turismo Ferraris, a 1953 250 Europa and a 1963 400 SA LWB Coupe Aerodinamico Series II. Trending News
Photo credit: Pawel Litwinski © 2014 courtesy RM Auctions
posted on conceptcarz.com
Loading...
Loading...
Loading...
Loading...
Loading...
Loading...
Loading...
Loading...