SHANGHAI 6 HOURS (WEC) THE FINAL ROUND OF A GREAT SEASON 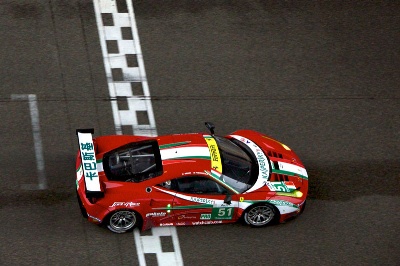 The Shanghai circuit saw the curtain come down on the first year of the FIA World Endurance Championship for Sports Prototype and Grand Touring cars. AF Corse had already taken the 2012 title with Ferrari taking the Constructors' crown with two races in hand. It's been an unforgettable season, with the Amato Ferrari run team always a front runner, taking five wins from eight races, including the legendary Le Mans 24 Hours, the most famous endurance race in the world. Even if the result in Shanghai would change nothing, it unfortunately ended after just four hours with a technical problem for the Ferrari No. 51 driven by Giancarlo Fisichella and Gianmaria Bruni. That left the door open for the Aston Martin Vantage of Darren Turner and Stefan Mucke to take their first win, followed by the Felbermayr-Proton Porsche of Marc Lieb and Richard Lietz, followed by the second AF Corse Ferrari, which made it to the podium in the hands of Andrea Bertolini and Olivier Beretta, who performed consistently throughout the race.
As for the LM GTE-AM class, the win went to the Larbre Corvette driven by Patrick Bornhauser, Julien Canal and Pedro Lamy, who thus take the team title, beating Felbermayr-Proton, second one lap down with Gianluca Roda, Paolo Ruberti and Christian Ried. Completing the podium was the Ferrari 458 GT2 run by Krohn Racing for Michele Rugolo, Nic JOnsson and Tracy Krohn.
posted on conceptcarz.com
Loading...