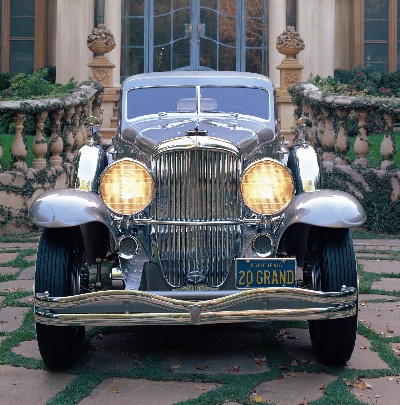 Palos Verdes Peninsula, April 23, 2013 -- The 'Featured Car' at the 2013 Palos Verdes Concours d'Elegance on September 15 will be this 1933 Duesenberg SJ Torpedo Sedan which wears a California license plate reading '20 Grand', since that was the original sales price of the car. Part of the Nethercutt Collection, it was restored in 1979 and took top honors at Pebble Beach in 1980. It was originally built for display at the 1933 Chicago World's Fair Century of Progress Exhibition. The 21st Palos Verdes Concours at the Trump National Golf Club in Rancho Palos Verdes, will celebrate the 'Age of Elegance' by showcasing some of the world's most luxurious classic automobiles, according to Chairman Peter Kunoth. The featured classes include Rolls-Royce, Bentley, Duesenberg and the coachwork of Raymond Dietrich. The Concours will also recognize the centennial of Aston Martin, the 60th anniversary of the Corvette, and the 50th anniversary of the Loewy Avanti. Other classes will showcase post-war luxury cars, and a full range of sports cars. Preservation cars - automobiles that are in original and well maintained condition - will be displayed alongside the restored cars. The PV Concours will be preceded by a Pleasure Road Rallye on Saturday, September 14, where drivers and passengers can take in the beauty of the Palos Verdes Peninsula while competing for prizes.
The PV Concours is a 501(c)(3) charity event with proceeds benefitting the Palos Verdes Art Center's educational and community outreach programs and Palos Verdes Rotary Foundation charities, including Harbor Area Boys & Girls Clubs.
For more information please go to www.pvconcours.org or call 1-866-522-7746. The media contact is Nissen Davis at avroy@aol.com or call 310-729-6510.
posted on conceptcarz.com
Loading...
Loading...
Loading...
Loading...
Loading...