Batman JUKE Rolls into Hands of Welsh Baker in the UK 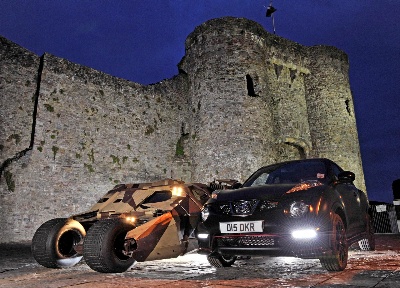 CARMARTHEN, Wales, UK – Some Hollywood glitz and glamour were sprinkled onto a corner of Wales recently, when Nissan handed over a very special one-off Batman-inspired Juke NISMO to its lucky new owner. Carmarthen residents were amazed to see the famous Tumbler drive through their town with Nissan's Dark Knight Rises™ Juke NISMO following just behind it. Bringing some big screen drama to west Wales, the two cars then took pride of place in front of Carmarthen Castle where the keys to the unique Juke were given to competition winner, Adam Williams. Self-confessed action film fan and local baker, Mr. Williams bagged the Dark Knight Rises™ Juke NISMO after taking Nissan's Thrill Test. He said: 'I can't believe I've won this fantastic car. It was the biggest surprise of my life and I was so excited to take delivery of it. I'll certainly turn a few heads driving around Carmarthen. It's great to think I'm the only person in the world with my very own version of the Batmobile!' Produced to celebrate Nissan's partnership with Warner Bros and the release of the third film in Christopher Nolan's Batman trilogy on DVD and Blu-Ray, the Dark Knight Rises™ Juke NISMO features a host of Batman-inspired details making it the envy of every movie fan and car buff. 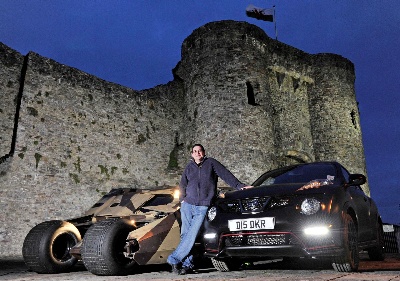 Based on the new Juke NISMO, The Dark Knight Rises™ Juke NISMO features the same 1.6-liter turbocharged engine driving the front wheels through a six-speed manual gearbox - giving it a 0-62 mph time of 7.8 seconds - as well as a NISMO body kit, uprated suspension and enhanced interior. But in addition, it has a whole host of Batman-inspired details that will make Adam Williams feel just like Bruce Wayne. Matte black paint gives a menacing look reminiscent of the on-screen Tumbler, while a shark fin antenna replaces the standard car's conventional aerial. In addition to NISMO badging, there are aluminum Bat badges on the front grille and tailgate while the unique gloss black 18-inch alloy wheels include bespoke red detailing, matching the eye-catching pinstripe on the bumpers and sills of the standard Juke NISMO. Open the door and you're greeted by Bat logos on the kickplates and reflective Bat badges on the headrests of the suede-trimmed NISMO sports seats. Thanks to down lighters mounted under the door mirrors the famous Bat signal can be projected onto the floor area around the doors. A clever uplighter projects the same signal onto the black headlining inside too. The Dark Knight Rises™ Juke NISMO was the work of Nissan's very own Batcave - Nissan Design Europe, based in London's Paddington, the same studio responsible for the design of the original Juke. Trending News
posted on conceptcarz.com
Loading...
Loading...
Loading...
Loading...