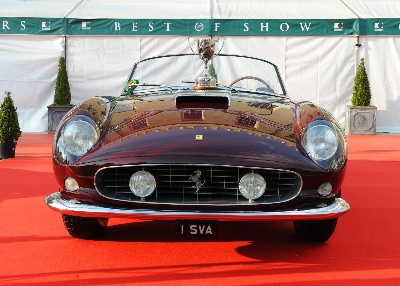 Syon Park, London, 11th September 2013 – Another sun-kissed early September in London saw Salon Privé 2013 draw to a close at the weekend, following the biggest and most successful show in the event's eight-year history.

World product debuts from BMW for the 2014 X5 M50d and Clark Abel for the 'Dakar' Evoque, and European debuts from Spyker for the B6 Venator Spyder and Icona for the one-off Vulcano, mark Salon Privé as the UK's premiere news-setting luxury automotive event for 2013.

For the classic Salon Privé audience, the Chubb Insurance Concours d'Elégance played host to 101 car and motorcycle entrants, 22% of which were entered from overseas, illustrating the international standing of Salon Privé in world Concours events. Sarah Allen from England took the star 'Best of Show' prize for her exquisite 1959 Ferrari 250 California Spyder LWB, perfectly restored by Barkaways.

Forty-five prizes were awarded in all by the prestigious judging panel; guest judge, Sandra Button, Chair of world-renowned Pebble Beach Concours, said: 'I have been extremely impressed by the Chubb Insurance Concours d'Elégance at Salon Privé. The standard of the car entries and knowledge and enthusiasm of the esteemed panel of judges here in London has been exceptional.'

Salon Privé managing director, Andrew Bagley, said: 'This has been an absolutely outstanding Salon Privé. The quality of entrants to the Chubb Insurance Concours d'Elégance has been unbelievable, it seems impossible for it to improve year-on-year, but it does. And it's a good job, because our judging panel, selected internationally from the world's most renowned automotive experts and commentators, is also becoming keener and tougher every year.'

He added: 'The event has settled very nicely into its early September dateline, with more manufacturers and super car exhibitors than ever joining us in 2013. This, combined with the additional offerings of the luxury retail village and EFG Private Bank Art and Memorabilia Fair, put Salon Privé right up there with the leading automotive events of the world, which is exactly what we set out to achieve eight years ago. Endorsement from Pebble Beach, with guest judges Sandra and Martin Button underline our international standing. In these events, quality wins over size every time, and we are proud to be growing in both attributes year-to-year.'

A new and exciting addition to Salon Privé for 2013 was the Royal College of Art Concours of the Future design exhibition, which saw a group of talented postgraduates from the RCA's Vehicle Design programme tasked with revisiting historic Concours-winning cars and submit a re-design of these icons for the modern world and beyond. Judged by a panel of international and renowned automotive designers, including Peter Stevens (RCA), Marek Reichman (Aston Martin), Victor Muller (Spyker) and David Woodhouse (Ford), this year's winning design was of a Nardi Bisiluro by RCA student Francesco Binaggia.

Hosting the Concours of the Future prize-giving, Peter Horbury, Vice-President, Design at Geely, said: 'The work is both exceptional and brave and I can imagine these designs featuring on the lawns here at Salon Privé for real in future years.'

Boodles Ladies' Day also saw one of the busiest Thursday's in Salon Privé history, with the judging led by Sunday Times' Style magazine senior commissioning editor, Fleur Britten, and the prize of an exclusive piece of Boodles jewellery for 'Best Dressed Lady' going to Helena Tepley.

A further new attraction for 2013 was the Audemars Piguet British Super Car Show, which attracted over 50 new cars displayed by manufacturers from all over the world. The show ended in spectacular style on Friday with a finale parade and presentation of the 'People's Choice' prizes based on the collated votes from thousands of attendees to the event during the three days. The 'People's Choice' prize-winners were as follows:
◾Grace and Pace Award – Rolls-Royce Wraith
◾Most Stylish Hyper Car – Pagani Huayra
◾Most Sensational Super Car – Vencer Sartheposted on conceptcarz.com
Loading...