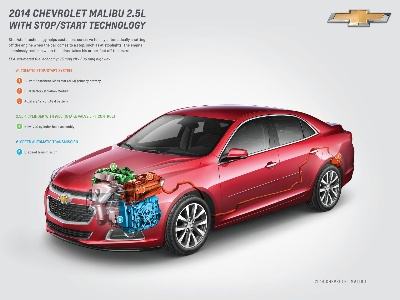 
DETROIT – The 2014 Malibu ECO is the first in its segment with a standard engine featuring fuel-saving stop/start technology. It shuts down the engine in certain driving conditions to reduce fuel consumption.

Stop/start and other technologies in the Malibu's new 2.5L intake valve lift control, or iVLC, powertrain, include direct injection, variable valve lift control and a new six-speed automatic transmission. Combined, they contribute to EPA-estimated fuel economy ratings of 25 mpg in city driving and 36 mpg on the highway – 14 percent and 6 percent improvements, respectively.

The 2014 Malibu is on sale now, with a starting price of $22,965, including destination freight charges, but excluding tax, title, dealer fees and optional equipment.

'The Malibu's stop/start system is one of the industry's most refined and simplest – and contributes to significant fuel savings in the city that drivers will appreciate every time they fill up,' said Greg Browning, development engineer. 'It works seamlessly with all driving conditions and is almost imperceptible. The driver doesn't have to do a thing – the Malibu does all the work.'

There are no buttons to push or procedures to learn with Malibu's stop/start system. It automatically shuts down the engine when the car comes to a stop under certain driving conditions, such as at a stoplight. The engine automatically restarts when the driver takes his or her foot off the brake.

The system monitors vehicle speed, climate control system operation and other factors to determine whether it is efficient to shut off the engine. In some cases, such as heavy stop-and-go traffic, the engine will remain running.

'We designed the system to complement the driving conditions customers encounter everyday, making it useful without being intrusive,' said Browning. 'A lot of the refined performance comes from the experience drawn from GM's eAssist electrification system, which also uses stop/start.'

When the engine shuts down, the vehicle's electrical system remains 'on,' including the lights, power accessories such as windows, locks, etc., the audio system and climate system. A small, auxiliary 12-volt battery mounted in the rear of the vehicle powers these electrical accessories to reduce the draw on the primary vehicle battery during restarting. An 'auto stop' position on the tachometer indicates when the engine shuts down.

The engine automatically restarts after approximately two minutes if the driver hasn't removed his or her foot from the brake pedal. Additionally, a driver-selectable mode for the climate system allows the driver to choose between maximum stop/start efficiency and maximum air conditioning performance.

Unique components used with stop/start include:
◾A tandem-solenoid starter that enables the engine to restart quicker and more smoothly than a conventional starter – even if the engine hasn't come to a complete stop
◾An electrically driven transmission auxiliary hydraulic pressure pump that keeps the fluid in the six-speed automatic circulating and primed for immediate take-off when the driver removes his or her foot from the brake pedal
◾Larger, 12-volt absorbent glass mat primary battery – which delivers up to four times the typical life cycle of a conventional battery – and a small, auxiliary 12-volt absorbent glass mat battery
◾Dual-battery isolation module that ensures both batteries are properly charged and the primary battery always has a sufficient charge to start the vehicle
◾Torque-reaction engine mounts that dampen the vibrations associated with a restart, helping deliver smooth, nearly imperceptible performance.

When the iVLC system operates in low-lift mode, the engine pumps only the air it needs to meet the driver's demand. The system switches to high-lift mode at higher speeds or under heavy loads, providing the full output capability of the engine.

The new 2.5L is SAE-certified at 196 horsepower (146 kW) and 186 lb-ft of torque (252 Nm). It is matched with a new, 6T45 six-speed transmission that makes its first appearance in the 2014 Malibu. It features improvements that reduce the energy required to pump transmission fluid, which enables additional fuel efficiency. Revised transmission shift points and quicker shifts also enhance the feeling of refined performance.

About Chevrolet
Founded in 1911 in Detroit, Chevrolet is now one of the world's largest car brands, doing business in more than 140 countries and selling more than 4.5 million cars and trucks a year. Chevrolet provides customers with fuel-efficient vehicles that feature spirited performance, expressive design, and high quality. More information on Chevrolet models can be found at www.chevrolet.com.posted on conceptcarz.com
Loading...