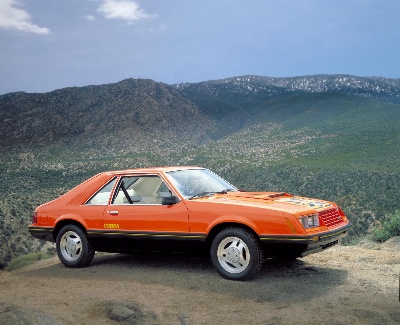 'Thou shall never do a slantback front end.' That was the commandment from Gene Bordinat, Ford's vice president of design, 'Henry Ford II only wants vertical front ends, and he'll show us the door if we ever try anything like it.'

This mantra hung over the early development of the third-generation of Ford's wildly successful Mustang. In 1975 Ford designers began the job of redesigning the iconic pony car for the coming 1980s. The car and country had been through a roller coaster 20-year period and both were in something of an identity crisis.

What defined a Mustang? Compact value and efficiency? A luxurious personal tourer? A muscle-bound performance bargain?

Two teams of designers in Dearborn and a third from the Ford-owned Ghia studio in Italy began competing for the privilege of crafting an all-new Mustang. By the fall of 1975, full scale sketches and clay models were being turned out and refined.

From the outset the only thing that was certain was that the finished product would be a very different sort of steed from Mustang II. That car had been a response to growing concerns in the late-1960s about fuel economy, creeping vehicle size, and safety.

The '79 Mustang would be based on Ford's new 'Fox' midsize platform and given a tidy 100-inch wheelbase. A minimum of two bodystyles were targeted – a more conservative notchback first and then a racier fastback model. Compared to Mustang II, a higher priority was placed on the fun-to-drive aspects, interior space, limiting weight and improved aerodynamics.

Within these parameters the teams worked their magic and things were proceeding along the path laid out by the boss. Many of the early fiberglass bucks resemble a sleeker, more refined take on the Mustang II's design elements. Bucketed headlights, a formal upright grille, and a lower sportier stance. Lots of variations were presented including larger personal luxury cars, vinyl tops, surprisingly compact economy versions – there was even a woody station wagon design!

In April 1975, everything changed when Jack Telnack returned to Dearborn after an overseas tour of duty that included a stint at Ford of Australia and then as the vice president of design at Ford of Europe. Telnack was a rising star in Ford's design department and eventually succeeded Gene Bordinat when he retired in 1980.

Telnack took over as the lead for one of the competing groups. Seeing the boxy designs that had been put to full scale, he wondered aloud why sleeker, more European-style design elements weren't being introduced. They existed in sketches but not in the cars physical models. Telnack pushed his team to introduce those elements as well as the previously forbidden slantback grille. With this newly unleashed creative freedom, less traditional shapes began to emerge by early 1976.

What's perhaps most interesting is the aggregation of different design elements from various styling concepts. The basic proportions for the fastback and notchback were developed by February of '76 and the winning design themes from Telnack's group were complete by July. Refining the details meant remixing different styling elements from several earlier models - the laid back grille came from a June clay model, quarter window louvers from April, side strakes were avoided, and four sealed beam headlights allowed for a low, wedge-like hood line.

The result was unlike anything else on the road. Modern and European-inspired but clearly American. What would become the 1979 Mustang had significantly more leg and shoulder room than the Mustang II, a tidy 2,700-pound curb weight and improved outward visibility. The new shape was Ford's first serious stab at reducing air resistance with the lowest drag coefficient on the road at the time – 0.44 for the fastback and 0.46 for the notchback. The wedge hood and higher seating position even allowed the driver to see the road surface four feet closer to the car. Topping off the new look, stylists even altered the famous galloping Mustang logo, making it more muscular with a longer stride.

Today, we know these cars as the 'Fox Body' Mustangs. They went on to be one of the most long-lived and successful platforms in the history of the nameplate with a production that lasted from 1979 to 1993. Along the way, Ford reintroduced the Mustang GT in 1982 and the Mustang convertible in 1983. In 1984 the limited production Mustang SVO was launched followed by the first SVT Cobra in 1993.

Fox Mustangs remain popular with street and drag racers for their light weight and compact design. More than 2.6 million third-generation Mustangs eventually ended up parked in driveways across the country. Click through the gallery above to see how the styling on this much loved car came together.

Ford Motor Company, a global automotive industry leader based in Dearborn, Mich., manufactures or distributes automobiles across six continents. With about 177,000 employees and 65 plants worldwide, the company's automotive brands include Ford and Lincoln. The company provides financial services through Ford Motor Credit Company. For more information regarding Ford and its products worldwide, please visit corporate.ford.com.posted on conceptcarz.com
Loading............