Success for Ferrari at Beijing Autoshow. Huge crowds on the stand to see the F12berlinetta and the HY-KERS 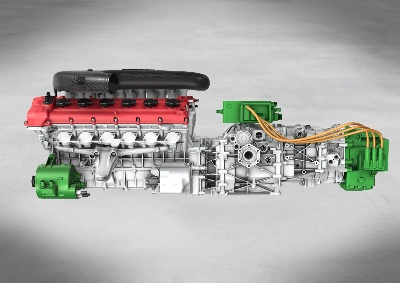 After a hugely successful unveiling at Geneva, the F12berlinetta, the first in a new generation of Maranello's flagship12-cylinder cars, makes its Asian debut at the Beijing International Motor Show. The event will also host the world premiere of the evolution of the HY-KERS concept, coupling hybrid technology with mid-rear architecture to cut fuel consumption and CO2 emissions on the combined cycle by 40 per cent whilst boosting performance. The F12berlinetta is the most powerful and high-performance road-going Ferrari ever. Powered by a truly exceptional V12 engine, it is built around an evolution of Ferrari's transaxle lay-out and features cutting-edge components and electronic controls. The F12berlinetta also boasts extremely advanced aerodynamics and a design that exudes an innovative yet classic beauty. The car's wheelbase is shorter, its engine and driver position are lower and a new suspension and gearbox layout has yielded a more compact tail section. The result is a shorter, lower and narrower car than the previous V12 coupé. It also boasts perfect weight distribution (54% over the rear axle) and a lower centre of gravity further back in the chassis. With a Fiorano lap time of 1'23'', 0-100 km/h acceleration in 3.1 seconds and 0-200 km/h covered in 8.5 s, the F12berlinetta delivers absolutely benchmark performance. The handling balance achieved ensures maximum driving involvement even at low speeds, a feature thus far the sole domain of mid-rear-engined cars. The sporty handling is equally nimble and responsive on the road as on the track. 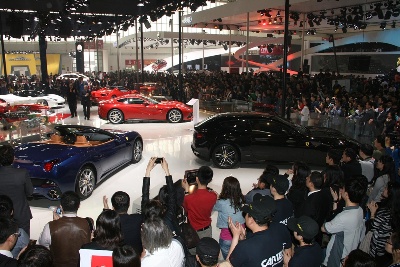 Great attention was paid to reducing fuel consumption and emissions which have been slashed by 30 per cent, with the result that the F12berlinetta tops its segment in terms of efficiency with 15l/100 km and 350 g/km of CO2. The other important unveiling at Beijing is the evolution of the HY-KERS project adapted to a mid-rear engine layout. The powertrain on display consists of a 12-cylinder engine and dual-clutch gearbox coupled to an electric motor. A second electric motor is dedicated to the auxiliary systems and is located in front of the V12. The two electric motors are connected to the batteries which can be positioned in the car in line with the available space and final configuration. The objective of this configuration is to create a sports car that, thanks to the integration with the electric motors, increases power while at the same time reducing emissions. The KERS features new, smaller and lighter electronic components which come close to achieving the declared target of 1 KW per kg of extra weight added by the hybrid system. Technological transfer from F1 was fundamental to the design, engineering and construction of an innovative electric motor used to optimise the car's longitudinal and lateral dynamic characteristics, namely torque management, traction control and brake distribution, to the benefit of sportiness and driving pleasure. Trending News
posted on conceptcarz.com
Loading...
Loading...
Loading...
Loading...
Loading...
Loading...
Loading...
Loading...