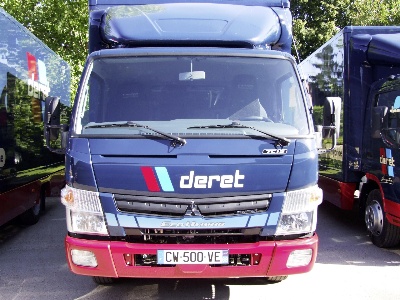 • French logistics company and pioneer of electric mobility opts for the Fuso Canter Eco Hybrid • The Deret Group now has one of the largest fleets of hybrid trucks in Europe • Fuso Canter Eco Hybrid keeps inner-city logistics running in Paris • New Fuso Canter now with gross vehicle weight of 8.55 t and complying with Euro VI • 50 years of the Fuso Canter Deret Transport, one of France's largest logistics companies, has recently opted for the Fuso Canter Eco Hybrid. The Deret Group is among the pioneers of electric mobility in France and now has one of the largest hybrid fleets in Europe, comprising 22 Canter Eco Hybrids. The Canter is the flagship model of Daimler subsidiary Mitsubishi Fuso Truck and Bus Corporation (MFTBC) and is a popular choice of light-duty truck among customers in over 150 countries. According to Deret spokesperson Jean-Luc Fournier, initial trips with the hybrid fleet have revealed a 25 percent reduction in fuel consumption compared with trucks with conventional engines. Eric Experton, Fuso Sales Manager at Mercedes-Benz France, described the decision by logistics service provider Deret Group - a pioneer of electric mobility - to opt for the diesel-electric-powered Canter Eco Hybrid as a major success for Fuso and Daimler Trucks. According to Fournier, crucial factors in favour of the Canter were 'the load capacity of over three tonnes and the parallel hybrid, which permits the vehicle to move off quietly in electric mode'. The Deret Group currently has a turnover of 170 million with a workforce of 1700, and is the largest employer in Orleans. Deret carries out all kinds of transportation tasks and is also very well known in Africa and Asia. Frédéric Deret founded the Deret Group as a haulage company in 1947. Electric vans and hybrid trucks to protect air quality In order to maintain a decent quality of life and a semblance of traffic flow on the permanently congested boulevards, the embankments along the Seine and in the lanes around Montmartre, for example, Paris - like all major cities - has imposed increasingly stringent environmental regulations. Trending News
posted on conceptcarz.com
Loading...