Alonso runner up with pride and style 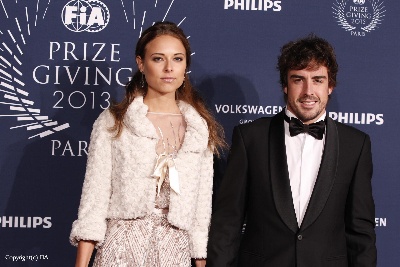 Maranello, 7 December –Yesterday evening, Cinema City in Paris hosted the FIA Gala evening at which the traditional prize giving takes place to honour this year's world champions. For the third time in his four seasons with the Scuderia, Fernando Alonso was present as runner-up, a result that had left such a bitter taste in 2010 and 2012, when the title slipped from his grasp at the very last. This year however, the result was accepted calmly, given the clear superiority of the winners as the Spaniard admitted from the stage. 'I want to congratulate Sebastian Vettel and Red Bull for their fantastic championships. They had a superb season and deserve these titles. We hoped to make life more difficult for them but they were very good and this is their night.' Asked to explain how he always manages to be so competitive, Fernando replied in his usual straightforward manner: 'I hate losing! At the start of every year, whatever the situation, the aim is to fight to win right to the end. I love winning and I love motor racing: this year I finished second and there's no doubt that, being this competitive, I wanted to win as did the team. However, I am honoured to be here today and I want to thank the team for that: let's hope we can be first next year.' Fernando received an ovation when he invited everyone present to applaud two drivers, but more importantly, two friends who were in the room, Mark Webber and Robert Kubica. 'Mark and I have been together in Formula 1 for twelve year and we have shared many fantastic moments and we will miss him next year. Robert is doing truly great things in rallying, but we are waiting for him to return to Formula 1.'
posted on conceptcarz.com
Loading...