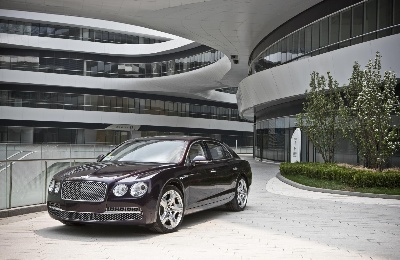 (Crewe, England. 17 December 2013) 2013 has been a year of key landmarks and achievements for Bentley and its customers.

The company confirmed it will build the world's fastest and most luxurious SUV at its Crewe headquarters, creating a further 1,000 jobs at Bentley and its suppliers, as well as taking Bentley drivers 'off-road' for the first time in the marque's history. UK Prime Minister David Cameron joined Bentley colleagues to celebrate the news and the start of an £800 million investment programme.

Strong sales increases were recorded through the first three quarters of 2013 (delivering a total of 6,516 cars against 5,969 in 2012) and Bentley's international representation was strengthened with 23 dealerships opening in locations from Bucharest, Lyon and Minsk through to Hanoi (Vietnam) and the famous Silk Road city of Urumqi.

Bentley further expanded its luxury goods portfolio with the introduction of a Handbag Capsule Collection and innovative Bentley Home Collection featuring a range of designer furniture inspired by the craftsmanship found inside every Bentley car.

Other key highlights included celebrating the 60th Anniversary of Her Majesty The Queen's Coronation by playing a headlining role at a special gathering of over 200 Royal Warrant Holders in the grounds of Buckingham Palace this July.

The company's famous Crewe headquarters celebrated 75 years of continuous engine production whilst also looking to the future when 20,000 solar panels (with a capacity of 5MW) were installed on the roof of Bentley's factory. It is anticipated that at peak generation times, the system will produce up to 40% of Bentley's energy requirements and reduce CO2 usage by over 2,500 tonnes per year.