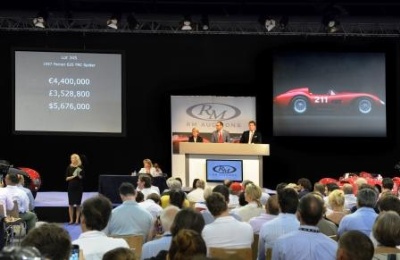 RM Auctions, the world's largest collector car auction house for investment-quality automobiles, continued its record-breaking sales run in Europe this past weekend, generating a spectacular €33,521,710 in sales* ($43,410,615 million USD**) with 86 percent of all lots sold at its biennial Monaco sale at the Grimaldi Forum. Held during the same weekend as the Grand Prix de Monaco Historique, the two-day auction presented a magnificent collection of more than 90 blue-chip automobiles, 100 Ducati motorcycles and three boats. As many as ten motor cars achieved individual prices exceeding €1 million, with four lots surpassing €2 million. In addition, the sale boasted several new all-time records for a number of specific cars and motorcycles sold at a public sale. The spectacular results rank the sale as one of the most successful collector car auctions ever staged in Europe as well as RM Europe's highest grossing sale to date, eclipsing the strong results achieved by the Company at both its debut sale in Monaco in 2010 as well as the highly successful 2007 Ferrari Leggenda e Passione event. Illustrating RM's extensive international client base, bidders hailed from 33 countries around the world, including as far away as China, Brazil and the United Arab Emirates. 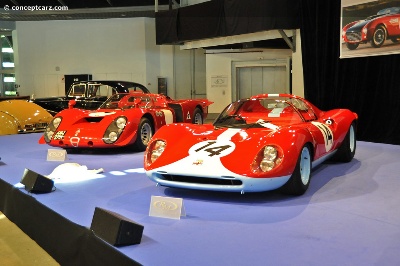 'Monaco 2012 has been a fantastic success. With in excess of 33.5 million sold, this sale rates as one of Europe's highest grossing collector car sales of all time and most certainly the highest grossing collector car auction in Europe this year. Once again, RM has proved itself to be the preeminent force in the collector car auction scene,' says Max Girardo, Managing Director, RM Europe. Reinforcing RM's reputation as the global leader in the presentation of important and historic Ferraris at auction, examples from the Modenese Prancing Horse dominated the top seller's list. In total, the sale lifted the gavel on 22 different examples spanning over 60 years of production. Headlining the group was the exceptionally rare, one of two 1957 Ferrari 625 TRC Scaglietti Spiders, chassis 0680 MDTR, which was offered for sale the first time in 30 years. The rarest of all TRs produced, 0680 MDTR attracted spirited bidding in the room and on the phones, selling for a remarkable €5,040,000, a record for the model. Another wonderful Ferrari competition car entering the history books was the 1952 Ferrari 225 Sport Spyder 'Tuboscocca', chassis 0192 ET, one of only 12 Vignale Spyders produced, which realized an incredible €2,520,000 to establish a new world record for a 225 S sold at auction. The historically significant 1966 Ferrari 206 S Dino Spyder, chassis 006, also drew fierce bidding to achieve the same sales price of €2,520,000. Other Ferrari highlights included the 1971 Ferrari 365 GTS/4 Daytona Spyder, chassis 14415, one of only 18 European-specification, LHD examples for €1,008,000; the Ferrari F1-2000 Racing Car, chassis 204, raced by Michael Schumacher on his way to the 2000 Driver's Championship for €806,400; and, the highly anticipated 1953 Timossi-Ferrari 'Arno XI' Racing Hydroplane for €868.000, a record for a Hydroplane sold at auction. In addition to the Ferraris, Alfa Romeos performed extremely well at RM's Monaco sale with two highly coveted Tipo 33 sports racing cars selling for record prices. The hotly contested1969 Alfa Romeo Tipo 33/3 Sports Racer, chassis 105 800 23, built and raced by Autodelta, well surpassed its pre-sale estimate selling for an all-time record sum of €1,232,000. The ex-Nino Vaccarella, Teodoro Zeccoli 1968 Alfa Romeo Tipo 33/2 'Daytona', chassis 75033.029, also sparked enthusiastic bidding, achieving an impressive €1,008,000. In a sale led by a terrific series of competition cars, another highlight joining the top seller's list was the 2007 Peugeot 908 V-12 HDi FAP Le Mans Racing Car with its incredible diesel engine which took the car to several victories in the 2007 season. Offered directly from the Peugeot family, it achieved a record price of €1,680,000, the highest price ever paid for a Peugeot at auction. Trending News
Photo credit: RM Auction
posted on conceptcarz.com
Loading...