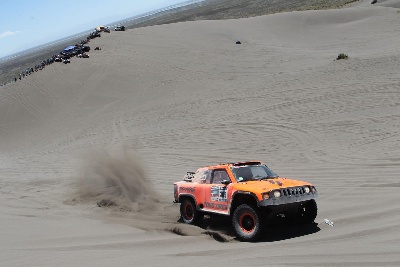 San Rafael, Argentina (January 6, 2014) – After a miserable opening day to the 35th Dakar Rally, Robby Gordon and the SPEED Energy / Toyo Tires team were optimistic about the second of 15 stages in the famed race and were prepared to take advantage of their 17th starting position. Unfortunately, it was another day of dismay for Gordon and his HST Gordini as it rolled back into the bivouac with a tow from a fellow competitor. With nothing shorter than a stage victory on his mind, Gordon found himself trying to capitalize on a 433-kilometer Special of the Rally that brought competitors into a high-speed test through Argentina's grey sand dunes. With the HST Gordini designed with high speeds in mind this was the perfect opportunity for Gordon and navigator Kellon Walch to work themselves back into the race. However, midway through the special things took a turn for the worst, and the HST Gordini developed a mechanical failure and would require a tow to finish losing valuable time to the Stage leaders. Being down 1 hour and 13 minutes will make tomorrow's Stage 3 from San Rafael to San Juan an even tougher task as it will require a large amount of skill and patience from the SPEED Energy / Toyo Tires team as the HST Gordini will encounter the first test of a mountainous terrain in the Rally passing through the Pre-Andes Mountains, climbing up and back down the 6,962-meter Aconcagua Volcano. If Gordon and Walch can make it over the mountain among the leaders the team will be able to proudly breathe a large sigh of relief. Be sure to watch the nightly highlight show of the 2014 Dakar Rally January 6th through January 18th on NBC Sports Network at 5 p.m. EST/ 2 p.m. PST. Check local listings for exact channel and time. 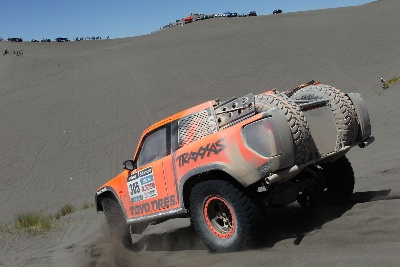