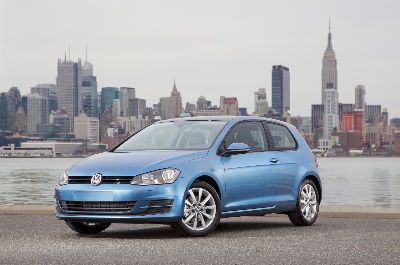 Mexican Secretary of Economy, Dr. Guajardo, and Volkswagen CEO, Prof. Dr. Winterkorn, inaugurate production of the new Volkswagen Golf at the Puebla plant • The Volkswagen Group is investing US$7 billion in new products and modern production facilities in North America in period to 2018 • Volkswagen de México celebrates 50th anniversary Puebla (Mexico) / Wolfsburg, January 14, 2014 – Production of the new Volkswagen Golf¹ commenced today at the Volkswagen plant in Puebla, Mexico. The facility is to build further models from the Golf family for the North America region going forward. Dr. Ildefonso Guajardo, Mexican Secretary of Economy, Rafael Moreno-Valle, Governor of the State of Puebla, and Prof. Dr. Martin Winterkorn, Chairman of the Board of Management of Volkswagen Aktiengesellschaft, inaugurated Golf production on the occasion of the ceremony marking the 50th anniversary of Volkswagen de México. 700 guests from politics and industry attended the celebrations. 'Volkswagen de México has a proud history and a promising future. One car in particular is a symbol of that: The new Golf', Prof Dr. Martin Winterkorn said in Puebla. 'The start of Golf 7 production will give Volkswagen a big boost in the North America region. And it underscores our commitment to Mexico as an automotive location. That is further confirmed by the US$7 billion our Group will be investing in North America in the period to 2018.' The intelligent lightweight construction of the Golf, the 'World Car of the Year 2013', is based on the technological innovations of the Modular Transverse Toolkit (MQB), and the vehicle will be exported from Mexico to the USA and Canada. The new Volkswagen Golf will hit North American roads from mid-year as it continues its global success story. Volkswagen has invested some US$700 million in new production plant and modern infrastructure for the Golf in Puebla. The first Golf sedan to be built in Mexico is a red Golf GTI². Production of further derivatives such as the Golf station wagon for the North and South America regions will begin during the course of the year. Golf production at the Puebla plant has a design capacity of 700 vehicles per working day. CEO of Volkswagen de México, Andreas Hinrichs, underscored the major significance of the Puebla location for Volkswagen: 'Our Puebla factory is today one of the Group's highest exporters and one of its largest plants worldwide. Over 10 million vehicles have already been shipped from here to customers all over the world.' In addition to the new Golf, the Puebla plant also builds the coupe and cabriolet versions of the Volkswagen Beetle plus the Volkswagen Jetta. In terms of technology, these models also belong to the Golf class and are to be adapted to the structure of the Modular Transverse Toolkit (MQB) in the medium term. Furthermore, Volkswagen began manufacturing modern TSI engines at the Silao engine plant in early 2013. The Audi facility in San José Chiapa will strengthen the Volkswagen Group's production network in North America from 2016. The vehicles manufactured in Puebla and the engines produced in Silao are built in accordance with the state-of-the art environmental standards of the Volkswagen brand's 'Think Blue. Factory.' program. This program aims to optimize resource efficiency at all Volkswagen plants and to continually improve the environmental compatibility of the production process. Trending News
Photo credit: Volkswagen
posted on conceptcarz.com
Loading...
Loading...
Loading...
Loading...
Loading...
Loading...
Loading...