Barbosa and Liddell Win at Sahlen's Six Hours of the Glen 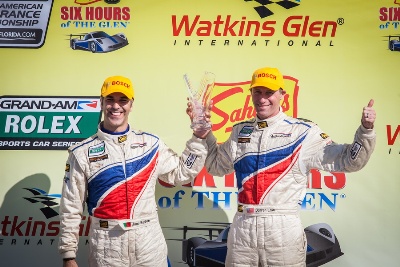 As billed, the first endurance race since the season-opening Rolex 24 At Daytona last January, the 2012 edition of Sahlen's Six Hours of the Glen, delivered highly-anticipated tight competition as 11 Daytona Prototypes (DP) and 21 Grand Touring (GT) cars took on the 3.4 mile road course at Watkins Glen International. At 1100 feet elevation, the historic track offered fans panoramic views of the valley and Lake Seneca, and, on this day, a cooling breeze to offset the temperature that climbed into the high 80s as the afternoon of racing progressed. On the track, both the temperatures and the action made it challenging for teams to keep the cars running and the drivers cool. Also contributing to driver fatigue was the very fast pace of the race. Between hour one and hour five, the race was green for three hours and 25 minutes before a full course yellow was brought out when the #73 Horton Autosport Porsche GT3 Cup spun into a sand trap and had to be removed. DP pole sitter Scott Pruett (Auburn, Calif.), driving the #01 BMW Riley for Chip Ganassi Racing with Felix Sabates, looked to be in good form as he led for the first 15 laps of the race. Ultimately, the need to change the radiator and a pit stop miscommunication dropped him down to eighth, which opened the door for the #9 Action Express Racing Corvette driven by Joao Barbosa (Porto, Portugal), with co-driver Darren Law (Phoenix, Arizona), that started third on the grid. 'This was a great race,' said Barbosa after winning the race. 'The Corvette was awesome and the team did a really good job giving us a very competitive car to drive all the way to the end. I was lucky to use traffic to my advantage as I chased down the #99 car. After following him for many laps and not able to get by I suddenly saw an opportunity with traffic and I made my move and got by to take the lead. The GRAND-AM Rolex Sports car Series is such a competitive series that you have to use everything you can to take an advantage and make your move to take a position. The car worked really well and the Continental tires were so consistent during all the stints I was able to bring it home after that. I am really pleased with our win.' 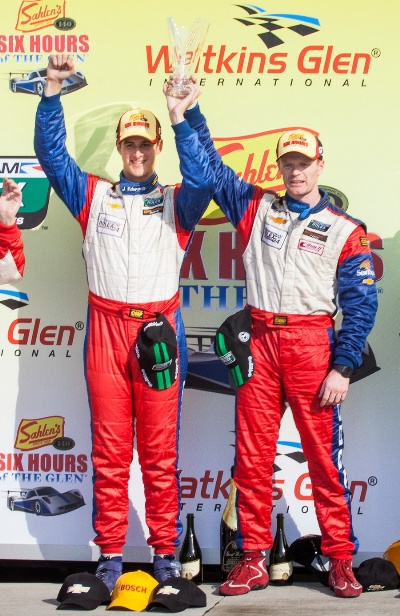 Law also had compliments for the team behind the car. 'We knew we had a good car right from the first session,' said Law. 'Actually we've had a good car most weekends and it sure feels good to be back up here on the top step of the podium. I wasn't in the car when we got past the #99 car but I want to thank Alex (Gurney) for racing clean. It's super competitive out there so it isn't always the case that the car you are about to pass will race clean so I thank you Alex. I think the championship is still wide open, there are several races yet to go so we keep pushing ahead. This win is an important one for the series, but it is an important one in general because it's a famous race with a lot of history so it's great to be up here.' The race dates from 1948; since 2000 the six hour endurance classic has been part of the GRAND-AM Rolex Sports Car Series and it has been sponsored by Sahlen's since 2002. Although the #75 Stevenson Motorsports Camaro GT.R started in pole position with Jordan Taylor (Apopka, Fla.) at the wheel, midway through the race the team dropped out of the lead. A close contest ensued between the #57 Stevenson Motorsports Camaro GT.R and the #94 Turner Motorsport BMW M3. 'It was a pretty tough race,' said Robin Liddell (Newbury, England), who, with John Edwards (Cincinnati, Ohio), prevailed to take the #57 Stevenson Motorsports Camaro GT.R to the top of the podium just edging out Bill Auberlen (Redondo Beach, Calif.) in the #94 car by 1.340 seconds. 'This is probably the best track for our Camaro over the course of a season and fortunately we have two races here each year which is a big help. We had a strong car all weekend with good balance, but we did have two tire blowouts this weekend during practice and qualifying so that had us pretty nervous about the same kind of thing happening during the race. The crew made a few adjustments so we felt pretty confident that we would be alright. Unfortunately we got a stop-and-go penalty after a restart which I thought was a bit questionable on the part of the tower. We managed to fight our way back up through the field after that and worked the car very hard to get the car back up to fourth or fifth when John took over. He did a great job hanging on and gaining more positions and trying to hand over to me a decent car to take to the end of the race. It was a great job by the team running our two cars which was a big task but they did it brilliantly.' Trending News
posted on conceptcarz.com
Loading...