RM Auctions, the world's largest collector car auction house for investment-quality automobiles, has announced more star consignments for its highly anticipated Monterey sale, August 17–18, in California, this time a remarkable group of Porsches. Comprising twelve examples in total and spanning 48 years of production, the offering is headlined by an exceptional group of racing greats from the sixties, seventies, and eighties. Continuing RM's commitment to present the world's finest automobiles, each represents the ultimate in design, engineering, and performance and showcases Porsche's magnificent racing prowess over the years. 'Whether they're looking for road or racing cars, Porsche enthusiasts are always extremely discerning as they look for quality cars with good history and authenticity,' says Rob Myers, Chairman & Founder, RM Auctions. 'Our annual Monterey auction is a perfect venue for us to showcase the best and we're delighted to present the ex-Jo Siffert 917/10 along with the tremendously successful 935 and 962 to our clients. The 911 GT1 alongside a number of outstanding road-going cars makes this offering all the more special.' Leading the exceptional roster of 'Rennsport' Porsches consigned to the RM sale is an extraordinary, well-documented 1971 Porsche 917/10 Spyder Can-Am Race Car, chassis 917/10-002. Raced in period by Jo Siffert, the car on offer is widely considered one of the greatest sports racing cars ever built. Initially tested at the Can-Am course in Weissach, Germany, 917/10-002 made its official racing debut at Watkins Glen. Siffert raced the car in six out of the ten Can-Am races that season, enjoying strong results before his life was tragically cut short. 917/10-002 returned to the factory race department shortly thereafter, where it was rebuilt and modified for the 1972 European Interserie. This time with Willi Kauhsen behind the wheel, 917/10-002 further built on its strong race record, scoring an impressive seven podium finishes from nine starts. The car remained in the care of Willi Kauhsen's family for the next 25 years, before being treated to a professional rebuild and restoration, which returned the car to its original Can-Am specification. The work was completed by the very same individuals who were in charge of its original development at Porsche in the early-1970s and was blessed by Porsche, as evidenced by a letter on file from Mr. Klaus Bishof, a long-time Porsche professional and current head of the Porsche Rolling Museum. Today, with just five owners from new, it has since participated in various demonstration events, including Goodwood and the Oldtimer GP at the Nürburgring (Est. $2,900,000–$3,500,000). 'The Porsche 917/10 is unquestionably one of the most desirable Porsches ever built and is certainly on a very short list of the marque's most legendary racing cars,' says Annette Abaci, Car Specialist, RM Germany. 'With its unique history that includes none other than Swiss racing great Jo Siffert and a professional restoration carried out to the most exacting standards, we expect this Porsche to garner strong interest from 'Rennsport' aficionados at our upcoming Monterey sale.' 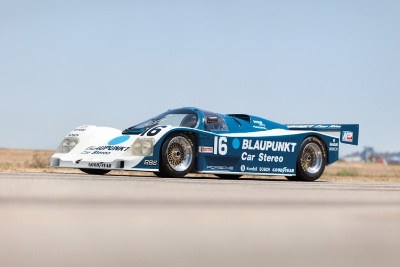 The 917/10 will be surrounded by a terrific roster of other competition bred Porsches at the RM sale, including the stunning, fully-documented 1963 Porsche 904/6 Carrera GTS Factory Works Prototype, chassis number 906-002. The second of Porsche's 904/6 factory team cars, of which just five survive, it is not only one of the limited few developmental prototypes built in 1963, but also one of the few 904/6s to retain its original 906 six-cylinder engine with which it was delivered to its first owner. After its use by the factory, it was acquired by gentleman driver Michel Weber, who went on to race the car extensively, scoring two victories along with multiple podium finishes in the 1966 season. Weber loaned the car to Swiss driving team Scuderia Basilea for the 1967 season before selling it to U.S. Air Force Major Berny Barns. Today, it is offered in completely restored condition, race prepared, and accompanied by numerous spare parts and extensive records. (Est. $1,800,000–$2,200,000) The evolution of Porsche's racing endeavors through the years will be further illustrated at RM's Monterey sale via a magnificent pair of 1980s era IMSA racing cars—the dominant 1981 Porsche 935 JLP-3 IMSA Racing Car and the championship-winning 1987 Porsche 962 IMSA Camel GT Racing Car. The ex- John Paul Sr. and Jr. and Derek Bell 1981 Porsche 935 JLP-3 IMSA Racing Car, chassis number JLP-3, is considered by many experts to be the 'definitive Porsche 935,' holding a place in history books as the most successful of all Porsche 935 race cars. Specially commissioned by father and son driving team, John L. Paul Sr. and Jr. for endurance racing, this 1982 IMSA Camel GT Championship winner is the only car to have won both the Daytona 24 Hours and the Sebring 12 Hours in the same year (1982). Adding to its exceptional racing pedigree, it racked up an unprecedented seven consecutive victories from Pocono in September of 1981 through Charlotte in May of 1982. Furthermore, from Sebring 1981 through Daytona 1983, it recorded an impressive nine wins and sixteen podium finishes out of a total of twenty-seven races. It is eligible for participation in all foreign and domestic IMSA GT vintage events, including the Monterey Historics (Est. $1,300,000–$1,800,000). The 1987 Porsche 962 IMSA Camel GT Racing Car, chassis number 962DR1(RLR 202), also boasts a superlative racing pedigree. Powered by a turbocharged 3.2-liter engine and specially prepared for IMSA sprint events, it quickly affirmed its place as the fastest of the 962s when it finished third overall at the fifth round of the 1988 Championship at West Palm Beach. Throughout the remainder of the 1988 season, DR1, as it was known, took two more podiums, including Porsche's final win of the season at San Antonio, breaking Nissan's eight-race winning streak. As the points-leading 962 of the 1988 season, DR1 is largely credited with clinching Porsche's final IMSA Manufacturer's Championship, beating Nissan by one point. DR1 was retired at the end of the 1988 season before later being campaigned in selected IMSA events during the 1990 and 1991 seasons. It has since been entered in several exhibition events, including Two Rennsport Reunions. Restored and well-maintained, its upcoming sale represents a special opportunity to purchase the last IMSA Championship winning Porsche 962 (Est. $1,200,000–$1,600,000). Trending News
posted on conceptcarz.com
Loading...
Loading...
Loading...
Loading...
Loading...
Loading...
Loading...
Loading...