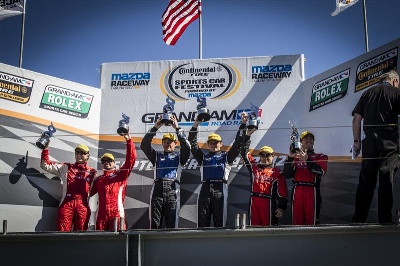 The track at Mazda Raceway Laguna Seca felt more like a boxing ring as the gloves came off for the penultimate race of the 2012 GRAND-AM Rolex Sports Car Series. From the drop of the green flag, through most of the race, teams were in full combat mode as the series championship title remained within grasping reach of several. Spectacular conditions at the track only served to enhance the fan enjoyment of the two hour and 45 minute sprint race for the 10 Daytona Prototypes and 17 Grand Touring cars. Starting from pole position, the #90 Spirit of Daytona Racing Corvette DP carried through to win their third race of the season while also becoming the only team to achieve three DP wins thus far in the 2012 GRAND-AM Rolex Sports Car Series. Richard Westbrook (London, England) and Antonio Garcia (Madrid, Spain) saw their two previous wins also arise from pole starts: at Barber Motorsports Park and the Mid-Ohio Sports Car Course. 'Richard drove a brilliant two stints and half the job was done by him,' said Garcia, who drove the final laps of the race and brought the car in with fuel running low. 'This is our third win this year and I put it down to fuel strategy. It was a great day for us and I am thrilled to have won today. I knew it was going to be a difficult race and we had to rely on the team and follow team directions. It was an awesome day for a race and I am very happy.' 'We got here nice and early and got rid of the jet lag,' said Westbrook who explained that strategy and track position are very important at Mazda Raceway Laguna Seca because overtaking is so difficult. 'This track has been good for us. We needed a trouble free weekend and that's what we got. I knew at some point that we had a good chance of winning, but I was basically hoping that we would stay fast enough and nobody would go off and bring out the yellow. Our tires held up pretty good and that was a pleasant surprise. This track is very slippery and really sensitive to temperature changes. We were essentially going into the unknown in the race because we have never done a long run on these tires during practice. It was key for us, and I am sure it was key for the #99 car as well and I believe that is how we got back into the lead at the end.' 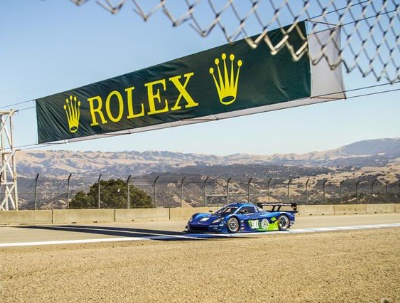 Asked about the recently announced merger of GRAND-AM and the American Le Mans Series, Westbrook commented: 'As far as the merger with ALMS there is nothing I can think of that is negative, I can only think of pluses. It's a brilliant thing for sports car racing on this side of the pond and if they get it right, sports car racing in North America will be the biggest thing in the world and rightly so.' Second across the finish line were the defending race winners, Jon Fogarty (Bend, Ore.) and Alex Gurney (Irvine, Calif.), in the #99 GAINSCO/Bob Stallings Racing Corvette DP, followed by the #8 Starworks Motorsports Ford Riley driven by Ryan Dalziel (Orlando, Fla.) and Alex Tagliani (Montreal, CAN). Finishing sixth in the DP class were series points leaders Memo Rojas (Mexico City, Mexico) and Scott Pruett (Auburn, Calif.) driving the #01 Chip Ganassi Racing with Felix Sabates BMW Riley. 'We have to keep our eye on the big picture with the championship on the line,' said Pruett before the start of the race. 'We're racing real close with the #8 Starworks car, so we'll keep that in our sights the whole time. Yes we want to win the race, and yes we want to be up front as much as we can, but at the end of the day it's about points and winning the championship.' While Pruett and Rojas had wanted to finish ahead of the #8 Starworks car in order to not loose points in the championship, they ultimately were able to retain their position as series standings leaders. The DP championship winners will now be determined at the 14th and final race of GRAND-AM's 2012 Rolex Sports Car Series which will be run Saturday, September 29, at Lime Rock Park in Lakeville, Conn. In the GT class, Dane Cameron brought the #43 Team Sahlen Mazda RX-8 across the finish to win the GT class. The 23-year old California native (Newport Beach), a driving school instructor currently residing in Sonoma, was overcome with emotion following the race. 'I have no words,' said Cameron, who shared driving duty with Wayne Nonnamaker (North Canton, Ohio). 'We were fast all weekend. We were up front all day….we won at home!' Trending News
posted on conceptcarz.com
Loading...