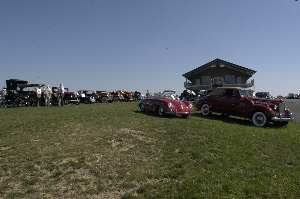 September 2005
The Fall Festival at BeaveRun occurred during the early part of September 2005 at the BeaveRun MotorSports Complex in Wampum, PA. The festival included an inaugural Concours d'Elegance, The Altered Gas - Hot Rod Circus, Viper Days and The Beaver County Cruise. Proceeds from the two day event fund the construction of a children's play area in the Emergency Department at the Medical Center, Beaver.

The Festival began with a fantastic road tour of western Pennsylvania. Hors d'oeuvres prepared by some of the finest chefs in the area, live music, an auction of fine artwork, a Bertil Roos Driving School give-a-way worth $3000 and track rides provided by MINI of Pittsburgh were just a few of the attractions that occurred during the two day celebration. Additional events included live entertainment, karting rentals and races, muscle car displays, acceleration trials, food, vendors and fireworks at dusk.

The favorites had to be the Dusenburg Model J and Model SJ. Both were nearly identical, distinguished only by minor differences in the paint-scheme and coach work. Both were in excellent condition.

A third area sat the custom vehicles. These vehicles had started out as production vehicles but over time and with a great deal of love and attention from their owners, had been transformed into unique creations. Most had been lowered, received vibrant paint, and given aesthetic enhancements. True works of art and labors of love. Very nice.

Rides were offered in various vehicles both on the main track and on the kart track. Proceeds went to charity. A Mazda RX-8 complete with a professional driver was giving rides on the kart track throughout the day. I took advantage of this opportunity multiple times. The experience was nothing short of amazing. The car was left in second gear and the foot was fully matted to the floor. The course was challenging with many turns and long straight areas. The top speed was around 60 mph, but diving into a sharp corner built for go-karts was enough to keep me holding on to door-handles just to stay in the seat. It did not feel like a rear-wheel drive vehicle at all, the back never once gave signs of breaking free.

Then it was off to the main track where professional drivers were giving rides in MINI's and a Callaway LM, all for charity. The ride in the supercharged convertible MINI was an experience. We hit 95 mph on the back straight-away before slowing to make the corner. The fun was in the turns. The car was very responsive and went where it was supposed to with very little difficulty. Next was a Callaway LM. This was not one of the vehicles that raced in the 1996 LeMans race, but rather one prepared to close specifications and referred to by the owner/driver as the 'sister vehicle'. The seats were comfortable, a luxury the race-prepared versions probably did without. The car was sporting nearly 500 hp, sat low, had a five-point harness, and a roll cage. The acceleration pushed me deep into the seat and first up where two corners which it had no problem navigating through. Half-way through the third corner the driver pushed the accelerator to the floor. This was evident by the loud engine noise and the back end coming 'a little loose.' On the back straight-away it easily tackled 100 mph. The car was amazing and the closest I have come to riding in a LeMans car.

There was a unique five-car display of rarely-seen Callaway vehicles. Callaway produced 9 LM cars, 4 were used for endurance racing, campaigned throughout Europe and 5 were sold for the street. The Callaway LM sat on the GT2 pole at LeMans in 1996 and also won the 1996 Manufacturers World Championship. This displayed car produces 470 hp and 435 lbs ft of torque. This vehicle, number 005, was giving rides for charity at BeaveRun and I took full advantage of the opportunity.

Callaway produced 508 twin turbo cars between 1986 and 1991. The twin turbo car could be ordered direct from the Chevrolet dealership by checking RPO B2K. The B2K option was an engine-option-only at a $33,000 added with body, paint and suspension options being additional. The display car, number 506, produces 403 hp and close to 600 lb ft of torque.

In 1990 Chevrolet developed the Corvette ZR-1, their entry to the development of a super car and, as a result, Chevrolet suspended their agreement with Callaway to modify/ sell the twin turbo corvette. Callaway subsequently developed the CR-1 from the ZR-1 platform. The standard Chevrolet Corvette ZR-1 produced 385 hp, while the Callaway CR-1 produced 475 hp. Over the next few years of development Callaway increased CR-1 horsepower another 30 hp to 505 hp with the addition of various exhaust modifications. The display vehicle is producing 505 hp and 425 lb ft of torque and is #001.

The display Callaway C-8 Camaro, number 001, was actually a prototype. It has been in various magazines most notable was Motor Trend March '94 'Worlds Baddest Camaro'. Designed by Paul Deutschman and built in Canada, the displayed car produces 404 hp and 412 lb ft of torque.

This was the largest car cruise I have ever attended. The entire parking lots were filled with classic vehicles. When the parking lots filled up, the lawn was used. The majority of the vehicles present were American Classics such as the Chevelle, Corvette, Camaro, Mustang, GTO, Bronoco, and Charger. Too many to name. The list was so broad that it ranged a plethora of makes and models from all walks of life. Many owners slowly drove their vehicles into the parking lot searching for a parking space. It became quickly apparent that the purpose was two-fold, to find a parking spot and to rev their engines. Reinforcing the belief that it must not only look good, but sound good too.

The best way to describe the event is that it included something for everyone. The Concours was very elegant, showcasing the evolution of the automobile from the early 1900's to the present. The car cruise was some of the finest vehicles Motown has produced. The Dodge Vipers spent most of the day racing on the main circuit. Spectators were able to walk through the paddock and garage areas allowed for up-close views of these mammoth machines. Kart rental were available throughout the day. Unlike most Kart tracks, this one featured sharp corners and banked turns that truly tested a drivers abilities. A burn-out contest was open to public participation. Many enthusiasts chewed up their tires on the asphalt in an attempt to gain the crowds respect and approval.

As the sun began to set the local hot-rodders began to roll in. Drag races took place on the main course, which provided more fun than expected. A straight stretch was designated as the racing area and once the race was finished the drivers would complete the course, at slow speeds, until they had traversed the track and were back in line to compete again. Many of the drivers felt the need to prove their vehicles on the remainder of the course, which involved corners. Unfortunately most of the cars were purpose-built to go in a straight line, many spun out when they attacked the corners at high speeds.

A concert and fireworks ended the evening.

Thanks to all the promoters, sponsors, participants, owners, workers, and all who made this event so successful. Thanks to the drivers who were giving rides in the vehicles and for not taking-it-easy on the courses.
Galleries
Main Concours