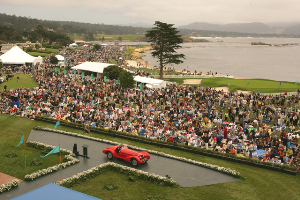 Alfa Romeo began to emerge as a major force on the international scene in the 1930s, establishing the foundation for an automotive legacy that led to the ultra-imaginative winged BATs (Berlinetta Aerodinamica Tecnica) of the ‘50s, and an array of vehicles that are now bringing world record prices at auction around the world, according to Pebble Beach Concours Co-Chairman Glenn Mounger.

'The 95-year history of the Alfa Romeo race cars and street cars is remarkable, and the vehicles are of utmost importance in the collector car world,' said Mounger. 'We've chosen to celebrate everything from the full array of pre-World War II classes to significant postwar custom coachwork, and there are already several very significant Alfa Romeo's currently being restored and prepared for Pebble Beach 2005. 'We'll also be hosting the complete collection of BATs -- the BAT 5, BAT 7 and BAT 9 models, which are considered some of the most inspired designs of the last century. In fact, Pebble Beach will be the first time the three BATs have been seen together in more than a decade.'

Alfa was founded in 1910 as A.L.F.A. (Anonima Lombarda Fabbrica di Automobili), produced three models during the next five years and was then purchased by Nicola Romeo in 1915. Automobile production ceased during World War I, so the first Alfa Romeo, a large touring car, didn't debut until in 1920. Some successful Formula 1 race cars and production cars were produced during the decade, followed by the 1931 release of the 8C 2300, a 2.3-liter supercharged eight-cylinder engine from famed engineer Vittorio Jano. Versions of this car, which featured two four-cylinder engines, won the 24 Hours of Le Mans from 1931 - 1935. The displacement increased to 2.9 liters by 1935 and the 8C 2900A produced a first, second and third showing at the 1936 Mille Miglia. In a nice bit of Pebble Beach Concours symmetry, there is a strong link between Alfa Romeo and Pininfarina, which worked on the Alfa Romeo 6- and 8-cylinder vehicles from the ‘30s.

'Battista ‘Pinin' Farina founded a company in 1930 that became the best known, influential and successful design house in history and has revolutionized automotive styling for eight decades,' says Mounger. 'He essentially invented elegant shapes and lines that would later become commonplace. His Cisitalia (1947) was the first car to be on permanent display in a modern art museum (MOMA in New York), and in the early ‘50s he was the first automotive designer to gain fame in the U.S.'

Battista Pininfarina, who died in 1966, was posthumously inducted into the Automotive Hall of Fame in 2004. A portion of those ceremonies included the following: 'The Italian automobile design genius Battista ‘Pinin' Farina (his name was officially changed to Pininfarina in 1961 by order of the president of Italy) founded his company with the intention to build special car bodies. His work ultimately influenced Alfa Romeos, Fiats, Ferraris, Lancias, Peugeots and even the classic Nash Healey…' The name Pininfarina is synonymous with many of the world's most significant automobiles, an inventive legacy that is shared by Battista and his son Sergio, who joined the Pininfarina Group in 1950 and became president in 1966. Sergio's acclaimed designs, mostly showcased in Ferraris, Lancias and Alfa Romeos, are part of a 55-year career highlighted by three prestigious awards: Cavaliere del Lavoro, the Legion of Honor, and the Honorary Royal Designer for Industry from the Royal Society of Arts in London -- the same three awards his father received.

'Sergio is an incredibly talented, gracious man who's one of the living legends of automotive design,' said Mounger. 'We're honored to celebrate the ingenious and alluring work of the Pininfarina family, and we're proud to have Sergio participate in our awards ceremony at the 2005 Concours.'

First conducted in 1950, the Pebble Beach Concours d'Elegance is an international gathering of automotive enthusiasts for 'a celebration of the automobile' at The Lodge at Pebble Beach™ on the Monterey Peninsula. The Concours combines a scenic location -- the famed 18th hole at Pebble Beach Golf Links® along the Pacific Ocean -- with the opportunity to view rarely seen examples of automotive style, performance and history. The annual affair also includes a series of auxiliary activities, including the Pebble Beach Tour d'Elegance around Pacific Grove and Carmel for Concours entries, and The Pebble Beach Auction conducted by Gooding & Company that showcases classic, vintage and antique cars.

There are many reasons why the Pebble Beach Concours is the United States most exquisite and prestigious automotive event. The breathtaking scenery and the elegant automobiles are two of the prominent reasons, while the week-long events that lead up to this historic occasion only amplify the celebration of all things beautiful in the automotive community and the many memorable accomplishments that were ascertained. This is the second Concours that conceptcarz.com has attended this year that has honored Alfa Romeo. The first was the Amelia Island Concours held on the east coast in the early part of the year. Both events have honored the many racing victories and automotive milestones this marque has achieved.

Thanks to my brother, Tim, for attending and photographing this event. A special thanks to celebrity, late-night talk show host, and major car buff Jay Leno for taking the time to pose for a few photographs. Thanks to the event organizers, participants, and all those individuals who made the event enjoyable and memorable.
Galleries
Antique Through 1915
American Classic Open 1925-1941 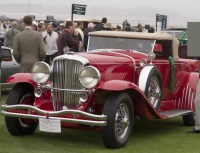 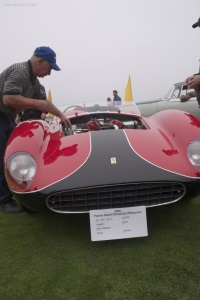