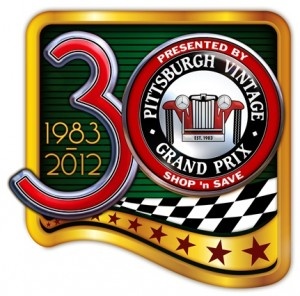 July 2012
June 1, 2012 Pittsburgh, PA - The PVGP roars into its 30th year leaner, faster, and more cemented as a respected and reliable motorsports institution than nearly any other vintage event out there. The only one run entirely on city streets, the longest continually-running event in the nation, this small endeavor that started on a 1983 Labor Day afternoon now draws hundreds of thousands of spectators and dollars every year to raise awareness about autism and severe mental disabilities

'It's an amazing event with a rich history,' noted Communications Chairperson Chris Sandvig. 'We really didn't have professional staff until 2003. Even now, we can't pull this off without the graciousness of the city, the undying loyalty and love of our 1,200-strong volunteer family, and people who are now bringing their grandkids to help out.' The Grand Prix still boasts volunteers that have been here since the very beginning – outlasting the go-go eighties, dot-com nineties, and the worst recession in decades.
Galleries
Group 1 Pre-War and Select MG-T Series

Group 2 Preservation and Production Under 1 Litre