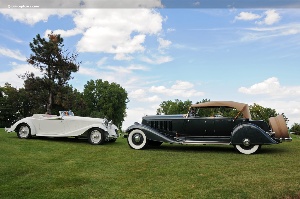 July 2012
The 34th Annual Concours d'Elegance of America at St. Johns was held at The Inn at St. John's in Plymouth, Michigan. Last year, the Concours moved to its new home after 32 years at Meadow Brook Hall in Rochester, Michigan. The new location was highly praised by attendees, exhibitors and sponsors. With the larger show field, onsite hotel, beautiful weather and many ancillary events, the 2011 Concours was deemed a great success. This year's event was equally successful.

The name, 'Concours d'Elegance of America' is a bold title, but one that describes the event perfectly. There are traditional 'Concours d'Elegance' classes featuring elegant creations of talented designers and skilled craftsman that were often fueled by unlimited budgets. There are also non-traditional classes, many of which pay tribute to the Motor City's heritage and their role in automotive history. Examples include drag racing cars, muscle cars, and Jet-Age station wagons. What are included in these groups, in true concours fashion, are some of the best and rarest examples in existence.

Several hundred vehicles were on the show field, making it the one of the largest displays of historically important automobiles in the world. The vehicles were judged and given awards within their respective classes, with each Best of Class vehicle eligible for the coveted Best of Show nomination. As is custom at this Concours, two vehicles were awarded these honors, one for the most elegant American car, the other for the most elegant Foreign Car. Since many of the cars on the showfield are America, predicting the winner is always a challenge. With a class devoted to Duesenberg, the challenge becomes even greater. Other motoring greats on display included Cadillacs, Lincolns, Stutz, Pierce-Arrows, and Packards.

The 1933 Chrysler Imperial Dual Cowl Phaeton of Joseph and Margie Cassini won Best of Show honors for American cars. It has coachwork by LeBaron and received several unique features including dual rear-mounted spare tires, a painted radiator, and lower-mounted headlights. It was certainly the most elegant American car on the showfield.

The most elegant Foreign Car was Jim Patterson's 1933 Delage D8S De Villars Roadster. It is the 1934 Paris Show Car and the Best of Show winner at the 2010 Pebble Beach Concours d'Elegance.

Jet-Age Station Wagons
The Jet-Age Station Wagon class contained some of the most interesting and rarely seen American station wagons from the late 1950s and early 1960s. Though their primary purpose was utilitarian, these tri-toned, finned vehicles were also a styling statement and a celebration of flamboyant design. The 1961 Chrysler New Yorker Station Wagon was selected as the Best of its Class. Only a few were built mostly due to their astronomical price tag of over $5,000. They had imposing style, luxurious appointments, and impressive performance. The example on display was powered by a dual Quad Cross Ram induction, 413 cubic-inch V8 engine producing 375 horsepower.

One example that received much attention throughout the day was the 1959 Cadillac Broadmoor Skyview. It is a custom-built car and one of only six made. It has an incredible 156-inch wheelbase and features a large plexi-glass observation panel in the roof.

Slingshot Rail Dragsters
The Slingshot Rail dragsters got their name from the extreme rearward positioning of the driver's torso behind the axle and slicks. In the early years of drag racing, the front-engine slingshot dragsters stood above the rest. The cars, also known as Top Fuel dragsters, run on a mix of approximately 90% nitromethane and 10% methanol rather than gasoline or simply methanol.

The cars were purpose-built for drag racing with an exaggerated layout that resembled open-wheel circuit racing vehicles. However, slingshot dragsters are much longer, much narrower and are equipped with large tires in back and small tires in front. Built by professional chassis builders, they were constructed by bending and welding together tubing and with the engine in front of the driver, as traditionally placed in race cars.

Pioneer Cars pre-1900
By the late 1800s, the auto industry was in its infancy and after much experimentation, the automobile was growing in popularity. Steam, internal and external combustion and electrical motors had all been attempted by the late -1800s.

The St. Johns Concours displayed five early automobiles. Each had a unique design, ranging from motorized tricycles to runabouts. The 1899 Orient Autogo Trike was awarded Best in Class. When new, the Autogo sold for $450 with either an Aster or DeDion motor. By removing the front wheel, the $150 Forecar Kit was added, forming a quadricycle that accommodated a passenger. When the current owner acquired the car in 2005, it was in poor condition. After six years of research and restoration, the car was returned to its original glory. It is one of only three Orients known to exist in the world, until a fire destroyed one in Germany in 2011. It is also the sole survivor with the Forecar kit.

Concours d'Elegance of America
This event is recognized through its longevity as the pre-eminent American-centric car show in the country. By featuring the heritage and history of Detroit, the show highlights the important role of styling, engineering, custom manufacturing, volume manufacturing, celebrities and technology on the evolution of the automobile. The event has built a reputation for its wide breadth of vehicles on display, covering all eras, and vehicles from all countries.

In addition to the Concours, there are a plethora of activities that make this event special, including seminars, vintage racing, dinners, concerts, and auctions. There was an Open Track Event at held at Waterford Hills Road Racing, a collector car auction presented by RM Auctions, a Motoring Tour, a VIP Tour to the Edsel & Eleanor Ford House in Grosse Pointe, Saturday Night Charity Gala, and an Art Display.
Galleries
Pioneers Pre-1900