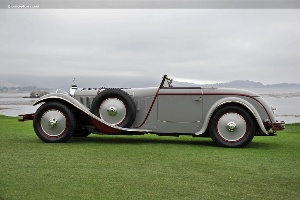 August 2012
The sun rose early today over the 62nd annual Pebble Beach Concours d'Elegance. Following this morning's 'Dawn Patrol', the official welcome and judging introduction for all participants at sunrise, the field was set and ready to kick off the 2012 edition of this famed event. Gleaming automobiles, some of the world's finest, awaited spectators and guests on the 18th fairway of The Lodge at Pebble Beach. As the Concours is the place to see and be seen during Monterey Classic Car Week, people dressed to the nines, many in period, with elegant hats and caps dotting the crowds. As judges made their rounds, classical music set the tone while the sun held the coastal fog at bay for most of the morning.

The Concours event, judging vehicles for their historical accuracy, technical merit, style and elegance, has grown into one of the most competitive collector car shows in the automotive world. The event aims to recognize and encourage proper preservation of the world's great automobiles. The Pebble Beach Concours is distinguished by the fact that all participating cars are still drivable. Thursday's compliment event, the Tour d'Elegance presented by Rolex, allows participants to display these mobile works of art in action, also providing an opportunity for extra points on Concours Sunday for those who partake.

True International Elegance
Over 220 vehicles were present on the Pebble Beach field today, an international auto anthology of truly stunning proportions. Among this year's Special Classes were the Cars of the Maharajas, featuring automobiles once owned by Indian Royalty. One of these remarkable cars was a 1934 Rolls-Royce Phantom II Thrupp & Maberly All Weather, also known as 'The Star of India,' owned by Yuvraj Saheb Mandhatasinh Jadeja of Rajkot, Gujarat, India. Saffron in color, this unique car has an incredible history, having been built for the Maharaja of Rajkot and later sold and sent to Europe in 1968. Mandhatasinh Jadeja, a former prince of Rajkot and great-grandson of the Maharaja, recently acquired the car as a birthday present for his father, returning it to India for the first time since it was sold 44 years ago.

'This was the last design by Henry Royce, before he passed away in 1933,' explained owner Mandhatasinh Jadeja. 'The motto of the Rajkot estate is inscribed in Sanskrit on the doors and windows of this car and when translated into English it reads, ‘the primary responsibility of a ruler is to look after the happiness and welfare of his citizens.' This car is an embodiment of heritage, art and culture and it has a fabulous history.'
Driver of the 'The Star of India,' David McKirdy, offered his perspective on the significance of these cars being present in Pebble Beach this year. 'For many years, Indian motor heritage was decimated by people smuggling cars out of the country. The Indian government reacted by passing a law forbidding the exportation of cars of a certain age, as they were correctly considered to be part of the country's national heritage. The Crown Prince Mandhatasinh Jadeja and this car are a most unusual example as it is one of the first times someone has actually brought one of these exported cars back to India. And the fact that some of these cars have even been allowed outside of India for this event is unprecedented.'

'This is my first time in the United States,' added owner Mandhatasinh Jadeja, 'and this is the perfect setting for tire meets turf, where the land and water are blended together in perfection while celebrating the automobile. This is truly a moment to rejoice.'

From Early Beginnings to Modern Day Success
Formerly known as the Pebble Beach Road Races, the Concours d'Elegance began as a compliment show to local road racing, which was discontinued in the late 1950s when cars became too fast for safe racing to continue. This led to the races moving on-track at Laguna Seca, the raceway that hosts the week's most significant historical races, the Rolex Monterey Motorsports Reunion. Meanwhile, the Concours show remained at Pebble Beach and has since evolved into one of the best shows of its kind and a major highlight of Monterey Classic Car Week.

The coveted Best in Show award is presented at the end of the day to great fanfare, with all class winners eligible for the Concours' most prestigious prize. This year's Best in Show award, complete with fireworks and a shower of confetti, went to a 1928 Mercedes-Benz 680S Saoutchik Torpedo, owned by Paul and Judy Andrews of Texas.

While celebrating the rich history of the automobile, the Pebble Beach Concours also raises money for charity through special exhibitions and donated prizes awarded in a raffle drawing. Rolex donated two timepieces this year for raffle, contributing to the charity support raised at this year's event. Rolex has been the Official Timekeeper of the Pebble Beach Concours d'Elegance since 1997, and today the event unites motor lifestyle fans of all backgrounds, including Concours regular Jay Leno who helped present the awards for the day's charity prizes.

As the 2012 Monterey Classic Car Week comes to a close, one can only begin to understand the automotive world's rich history. The Pebble Beach Concours d'Elegance brings that story full circle, through the competition for vintage beauties and the welcoming of state-of-the-art concept cars. Together these two elements have helped build the reputation of the event as one of the world's most prestigious, and to be present here in any category is an honour. The 2013 edition of the Pebble Beach Concours d'Elegance will take place on Sunday, 18 August, when the next chapter begins at this famous coastal landmark.

About Rolex
Leading brand of the Swiss watch industry, Rolex, headquartered in Geneva, enjoys an unrivalled reputation for quality and expertise the world over. Its OYSTER watches, all certified as chronometers for their precision, are symbols of excellence, performance and prestige. Pioneer in the development of the wristwatch as early as 1905, the brand is at the origin of numerous major watchmaking innovations, such as the OYSTER, the first waterproof wristwatch, launched in 1926, and the PERPETUAL rotor self-winding mechanism introduced in 1931. Rolex has registered over 400 patents in the course of its history. A truly integrated manufacturing company, Rolex designs, develops and produces in-house all the essential components of its watches, from the casting of the gold alloys to the machining, crafting, assembly and finishing of the movement, case, dial and bracelet. Rolex is also actively involved in supporting the arts, sports, the spirit of enterprise, and the environment through a broad palette of sponsoring activities as well as philanthropic and patronage programmes.
Galleries
Antique: Small Horsepower
Antique