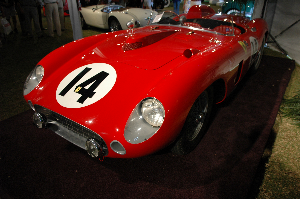 February 2006
When the gavel struck the podium closing the sale of the 1938 Talbot-Lago T150 C SS Teardrop Coupe at the inaugural Gooding & Company auction in Palm Beaches, more than 700 people in the audience witnessed a moment in history. The Teardrop Talbot-Lago sold for $3.905 million including buyers premium (the 'hammer price' being $3.55 million) – a world record sale for a Talbot-Lago Teardrop Coupe. The vehicle was the star among 55 rare automobiles at the auction, which followed the second annual Palm Beach International Concours d'Elegance on Sunday, January 22 at the Palm Beach Polo and Country Club.

One of the rarest cars in the world, this 1938 Talbot-Lago has never been shown before to the public. It's one of the few automobiles ever built to blend a combination of concours and competition heritage. This car survived 50 years in its original, undamaged condition before a thorough restoration completed in 2002.

'To set a world record during our first year in Palm Beach is remarkable,' said David Gooding, President of Gooding & Company. 'The Talbot-Lago is just one indication of the high caliber of cars that were offered here, and we are already planning next year's impressive lineup!'
Initial data indicates that 27 cars were sold totaling nearly $7 million. They included a wide selection of the finest show, touring and racing cars.
One favorite on the auction block was a 1980 Ferrari 312 T5 Formula One that sold for $660,000. Among the most desirable of all Ferrari grand-prix cars, this one attracted a great deal of attention among the host of Ferrari collectors and enthusiasts in attendance. Many flew to Palm Beach to attend the Palm Beach Cavallino Classic, held the same weekend at The Breakers. An icon of its era, this Ferrari was exclusively driven by one of racing's most exciting and well-known drivers, Canadian Gilles Villeneuve.

Crowds also reveled in the back-and-forth bidder action of the 1960 Jaguar XK 150S 3.8 Drophead Coupe that sold for $159,500. One of only 89 produced, this sports car offers a combination of performance and handling with a level a comfort and luxury rarely seen in cars from this period.
Other cars at the top of the auction sales list were the high performance 1962 Chevrolet Corvette Fuel-Injection Convertible that sold for $489,500 and the 1940 Packard Custom Super Eight One-Eighty Convertible Victoria that sold for $253,000.

Absolutely unique, the Ferrari 290 MM isn't, however, one of a kind. It is two of a kind - the 1956-season 860 Monza and 1957-season 290 MM. For a Ferrari, the list of drivers who have competed in it is absolutely without parallel if only for the simple reason that it includes Stirling Moss and Juan Manuel Fangio. No other Ferrari can claim that distinction. Its other drivers are equally prestigious: Castellotti, Collins, Gendebien, Gurney, Hermann, Hill, Maglioli, de Portago and von Trips.

Over $60,000 has been spent on the 1966 Shely Mustang GT 350 6S254 to make this one of the finest Shelby Mustang GT 350 historic race cars. It is as dramatic in its appearance and presence as it is in its performance.

The 1967 Trident Clipper V8 Prototype with coachwork by Fissore has been featured on the cover of the subject of a centerfold story in Volume 39, No. 1 of Autmobile Quarterly and was exhibited ath the 1996 Pebble Beach Concours d'Elegance as well as the Meadow Brooke Concours in Michigan.

The Duesenberg J's allure fascinated enthusiasts from the model's introduction. Even in the depths of the Great Depression Duesenbergs were cherished objects of quality and style, carefully maintained, preserved and kept in running condition by dedicated owners. For good and sufficient reason it was the magnificent Duesenberg engine that inspired owners, and throughout their histories it is the engines' identities that have been most important. Even today, most Duesenberg J's are known first by their 'J-number' and only secondarily by their chassis identity.

Chassis number 2406, the Duesenberg Model J Disappearing-Top Convertible Coupe shown here, is typical of the devotion that these magnificent automobiles inspired and the lengths to which owners went in the late '30s through the early '50s to keep them running. The magnificent chassis has always carried this sleek Murphy Disappearing-Top Convertible Coupe coachwork. Like many Duesenberg J's, its current engine, the factory-supercharged SJ #J527, was transplanted from another chassis (2556) in the late '30s by Shirley D. Mitchell, one of this car's early owners.

The 1938 Bentley 8-liter Sport Saloon with coachwork by Mulliner has great international appeal and an enviable heritage that few automobiles can match. From its sophisticated mechanical specifications to the marque's LeMans-winning history, both then and now, this car represents the ultimate development of the vintage Bentley under the direction, planning and thinking of the great Walter Owen Bentley himself.

Talbot-Lago T150 C SS number 90117 was ordered in 1938 by the Duke Philippe de Massa specifically to race in the 1939 Le Mans 24 Hours. It was bodied in aluminum with steel fenders for lightness and features both Joseph Figoni's signature flush-fitting sunroof and a one-piece rear window which is hinged at the top and opens for cockpit ventilation in competition, the only Teardrop coupe with this feature. According to Claude Figoni, the coachwork is 2 inches lower and 4 inches longer than the other T150 C SS goutte d'eau coupes for reduced frontal area and lower drag. Additional competition features include the quick-release external fuel filler cap and large-capacity fuel tank fitted below the trunk, which is full-sized to contain the spare tire required by sports-car racing regulations, a body-colored mesh grille for additional cooling below the chrome radiator grille and added bracing for the front end. The headlights are completely faired into the low catwalks between the body and the teardrop front fenders and covered by vertical grilles that complement the radiator grille.

This is the only Talbot-Lago T150 C SS Figoni & Falaschi goutte d'eau coupe ever built specifically for competition. Its coachwork is described by Claude Figoni as unique even among the individually configured Teardrop series. Lavishly trimmed and detailed, it is a rare example of concours elegance and competition which survived in remarkably complete and undamaged condition, through 50 years until it was acquired and restored by the present owner. It has never been shown, and has only about 100 miles of shakedown and test driving since its restoration was completed.

This historic and important Glockler-Porsche Roadster is correctly marked with only Porsche identification, indicative of the close cooperation between Glockler and Porsche in the development of high-performance sports cars for competition. Its influence upon Porsche, and particularly on Max Hoffman's insistence that Porsche develop the lightweight Speedster for the U.S. market, makes it one fo the most important of the Glockler-Porsches. It is brilliantly restored in Porsche Silver with black interior and carries a yellow nose band similar to its livery at Nurburging when it was raced by Helm Glocker in August 1952. The workmanship is absolutely of the highest quality and includes careful restoration of the elaborate brass fuel tanks surrounding the spare-tire pocket in the nose, specially constructed and sealed to withstand the corrosive effects of its alcohol fuel. The removable hardtop has been meticulously re-created using a surviving portion of the fire-damaged original top as the pattern, along with the low windshield to which it mates for high-speed tracks. It rides on BMW 328-style disc wheels, but a pair of the original magnesium wheels have survived. It has been restored with the engine that was with the Glockler-Porsche in Colorado; however it is believed that the aluminum and magnesium in the original engine, as well as several that followed it, were corroded beyond repair by the alcohol fuel.

Entered at LeMans by Scuderia Scirocco of Modena, Italy, Powell hired Tony Settember and Jack Turner to drive his 1962 Chevrolet Corvette Fuel Injection at Le Mans. Prior to the race it was entered in a hill-climb in Verona, Italy, as a shakedown and test which it won handily.

At LeMans in 1962 the grid was set by engine size, putting the 5.4-liter Settember/Turner Corvette in the number-one position, and it is shown in the Moity/Teissedre LeMans book charging up the hill beyond the Dunlop bridge just after the start pursued by a flock of GTOs, Jags and the thundering Maserati 151 Coupes. But while running third in class after 13 hours, Jack Turner accidentally lifted the reverse lockout while downshifting at the end of the Mulsanne Straight and selected reverse instead of first with the expected consequences to the gearbox. Settember attempted to continue with only one usable gear in the 4-speed, probably third. Continuous high engine revs snapped the fuel-injection unit drive cable after another half-hour of racing and the Corvette retired in the fourteenth hour, having completed 150 laps. It was a disappointment, but on tempered by the fact that Hugh Powell's privately entered and prepared Corvette outlasted most of its competition, including all the Maserati 151s, the factory-entered Aston Martin Project 212, both Aston Martin DB4 GT Zagatos and Ferrari's special 330 LMB.

Dale Pearman's mission to preserve this unique example of Corvette history is complete. Carefully restored to like-new condition, it is a symbol of the dedication of a few Corvette owners to build Corvette's reputation in the most demanding long-distance race in the world and of their successors to preserve the history of the marque. The next time a Corvette took the start at LeMans was when Dick Guldstrand and Bob Bondurant brought their L88 coupe under the flag in 1967. Dale Pearman's 1962 LeMans Corvette is one of only five straight-axle Corvettes to compete in the 24 Hours of Le Mans, the first in a long string of enthusiastic owner-entered Corvettes that laid the groundwork for Chevrolet's ultimate success with the current Corvette generations.

Ferrari 312 T5 MAT/045 is one of the most desirable of all Ferrari grand-prix cars. With its Scuderia Ferrari competition history - exclusively driven by Gilles Villeneuve, the most talented and exciting drive of his era.

The Ferrari 342 America Coupe is an automobile of distinction and quality, one of the most exclusive Ferrari gran turismos ever built.

There are few experiences in life that can measure up to driving a Ferrari F40 GT, which is why most of them are carefully sequestered in long-term ownership in the most discriminating collections.
Galleries
1900-1935