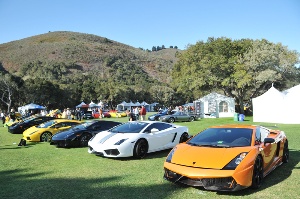 August 2012
The 27th Edition of Concorso Italiano, as in years past, brought the best of Italy to the spacious greenery of the Laguna Seca Golf Ranch in Monterey, California. This year's feature attraction was the Cars of Bertone in honor of their 100th anniversary. The event also celebrated the 55th anniversary of the Fiat 500.

Concorso Italian showcases the passion of many enthusiasts for the Italian built automobile. They recognize them as Sculptures in Motion and engineering marvels. From the exotic to the utilitarian, the cars of Italy are always well represented. Senses are overwhelmed walking from row-to-row of exotic Lamborghinis, Maseratis and Ferraris. Italy certainly produced some of the finest, exotic, and sportiest automobiles.

The history of the Bertone Company dates back to November 1912. Honoring their work in the industry, the centerpiece at Concorso was the Bertone Nuccio concept car. This concept (which made its debut at the Geneva Motor Show), is an 'extreme' sportscar that puts an evolutionary imprint on the concept that is built into Bertone's DNA: the mid-rear engined berlinetta. Formally, the Nuccio takes its layout from the low, muscular one-box design that is part of the company's historic tradition. At the same time, it displays a styling language of strong emotional impact that projects the brand's identity into the future.

Other cars in attendance in honor of Bertone were a Fiat Stangeullini Berlinetta, Lamborghini Miura S, Alfa Romeo Sprint Speciale, and a Dodge Z-250. Sitting in close proximity to the Bertone Nuccio was another concept - the 1967 Jaguar Pirana one-off. The Pirana had futuristic styling, a sporty persona, luxurious amenities, and many safety features. It is elegant, refined and harmoniously balanced in every detail.

With the re-introduction of the Fiat 500 into the United States, the gathering of past-and-present Fiat 500s at Concorso have become even more profound. This year, Fiat introduced the 2013 Fiat 500 Turbo at Concorso. The new Fiat offers 135 horsepower and 150 lb-ft of torque, which places it above the 'base' model but 'below' the Fiat 500 Abarth. As Tim Kuniskis, Head of FIAT Brand North America described 'the sweet spot.'

This years Best of Show honors was awarded to the 1955 Ferrari 250 GT Europa owned by Ken and Dayle Roath of Newport Beach, California. It wears coachwork by Pininfarina and was the display car at the 1956 Brussels Motor Show. It has been given a recent restoration and upon completion it was display at Concorso d'Eleganza Villa d'Este where it was awarded with the 'Trofeo BMW Group Classic' for having the best restoration.
Galleries
Gallery