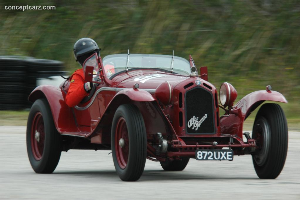 March 2006
The Cavallino Classic is the opening round for the Shell Ferrari and Maserati Historic Challenge which has traditionally housed the largest gird of the series. The vehicles are organized into two groups, drum and disc. The faster cars were assigned to the GT class while the 'slower' were put into the Sport class. To compete in the Series, the vehicles have to be built for racing and authentic Ferrari or Maserati. Maserati's were permitted because of the recent 'merger' of the two companies. Pre-war Alfa Romeos that were raced by Scuderia Ferrari were permitted.

There were four track days at Moroso Motorsport Track, with the first two days being closed to the public. The final day was the official race while the other days were used for practice and testing. One of the many highlights was a Ferrari FXX that saw some track time during one of the practice sessions.

A pair of Ferrari 250 TestaRossas were the fastest in the Drum Brake Group. The Ferrari 250TR was produced from 1957 through 1958 during which only 19 examples were created. The 'pontoon' fender body was designed by Scaglietti and the power was supplied through a Colombo 12-cylinder engine mounted at a sixty-degree angle and outfitted with six Weber 38 DCN carburetors. Power was sent to the rear wheels via a four-speed manual gearbox. With 300 horsepower, the 800 kg vehicle was able to achieve a 168 mph top speed. From 1958 through 1961, the 250 TR was entered in 19 championship races where they emerged victorious ten times.

An Alfa Romeo 8C/35 captured the pre-war class championship. The Alfa Romeo 8C-35 were Scuderia Ferrari works car which raced at Monza, Modena, Nurburgring, Lucca, Monaco and more. The list of historical drivers include such names as Dreyfus, Farina, Brivio, and Nuvolari.

Bobby Rahal competed in a 250 SWB where he emerged first in class. He was followed closely by a pair of 250 GTO's. The Ferrari 512M with chassis number 1024 was the fastest of the day, driven by Ed Davis.

The track is a 2.25 mile course with ten turns in total. The track is beautiful and full of difficulty that offers the driver both high speeds and sharp turns. There is ample parking and seating for visitors but due to the tracks age and lack of necessary safety structures, spectators and photographers are asked to stand back, away from the track. It made photography difficult, but we hope you enjoy the coverage. The vehicles have been broken down into the two groups, Disc and Drum. Most of the photographs are of the vehicles racing, but some were of vehicles in the Paddock.

Background
The legacy of Ferrari begins with its owner, Enzo Ferrari, a highly competitive individual that began racing in the early 1920s. Near the close of the 1920's he formed his own racing team, 'Scuderia Ferrari'. He had grown in success by assembling some of the greatest engineers and drivers available. Vittorio Jano, an engineering genius, joined Alfa Romeo in 1923 and immediately began a design program which would ultimately lead to the P2 Grand Prix cars. He was also responsible for the use of twin-cam engines in two series of the 6C cars. Vittorio Jano's 1929 6C 1750 had been a mechanical jewel with an enviable sporting record, dominating Sport Category racing until 1931. Then later, to maintain the firm's superiority, an eight-cylinder version of the same car, the 8C 2300 appeared. Tazio Nuvolari, one of the drivers for Scuderia Ferrari, captured many historic victories and propelled the cars he drove into the history books.

In 1937 Enzo Ferrari decided to break his ties with Alfa Romeo and begin his own independent racing program. Since the relationship with Enzo Ferrari and Alfa Romeo were so closely knit, there were still contracts in place. To ensure that no issues would arise, such as stealing customers or using trade secrets, Enzo agreed not to create vehicles under his own name for a period of four years. He formed a company named Auto Avio Construzioni that created vehicles, only two were ever built, using Fiat components and costumed bodied by coachbuilders. The onset of World War II slowed, and ultimately halted, production of automobiles. Instead, the factories and workers focused on creating military items to support the war efforts.

After the war there was still high demand for the items Enzo had been creating during the war. His passion was with racing, and soon a new car was under construction. He began by employing Gioachino Colombo, an individual that would aid in the success of the Ferrari Empire. Colombo began by designing a chassis and drivetrain. The result was a tubular frame with a 12-cylinder 'Vee' type engine. This was not 'ground breaking' but it was a proven design, having been used by Alfa Romeo in the past. The engine design would prove its worth and versatility by lasting until the mid 1960's, powering many road and track vehicles. Enzo had requested that a five-speed manual transaxle be matted to the 1.5-liter engine, a feature that would give his cars an advantage. A supercharger was added to comply with the Grand Prix regulations.

By the close of 1946 Ferrari was advertising the sale of his 125, a name created from the unitary displacement of the 1.5 liter engine. By early 1947, the first car was assembled. Within a short period of time, they were being raced.

In a time when advertising of vehicles was rarely done; rather, the success of the manufacturer relied on the outcome of their racing programs. Ferrari, to this day, has proved to be one of the greatest manufacturers of super-cars. His competitive nature and desire to prove his machines have forever cemented his place in history. The Historic racing that transpires at Moroso Motorsport Park, the first race of the year for the Historic Challenge, is a true testament to the ingenuity, creativity, and longevity of the Ferrari legend.
Galleries
Drum