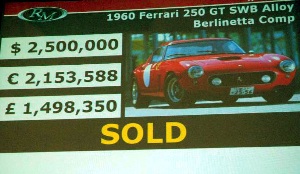 March 2006
Vintage Motor Cars at Amelia Island
RM Auctions was invited to participate in the weekend activities of this years Amelia Island Concours d'Elegance. They demonstrated their excellence and passion for automobiles by assembling an elite group of cars from many different walks of life, capable of satisfying the tastes of any automotive enthusiast. The cars were displayed Friday and Saturday with the Auction beginning at 11:30 am on Saturday morning. These wonderful works of art were basking in the Florida sun just feet away from the sandy beaches of the Atlantic Ocean. The Amelia Island Courtyard was transformed into a museum of automobiles and racing history. In the center of the collection was a tent that housed about 30 or 40 vehicles and offering the onlookers a break from the warmth of the sun.

The Auction
The Auction began at 11:30 AM and lasted well into the evening hours. The over one-hundred vehicles were each carefully displayed in the center of the stage, each in their own turn, while onlookers bid on the vehicle. Some were pushed onto the stage while others drove under their own power. The Buick Regal NASCAR stock car accidentally tore up the carpet when the driver gave it the slightest amount of throttle, awakening the 656 horsepower engine and causing the racing slick tires to spin at a high rate of speed. There were two holes in the carpet followed by a long patch of rubber. Although it was done on accident it was something that everyone enjoyed. At the close of the auction nearly all of the vehicles had found a new home. With less than 2% of the vehicles unsold it is understandable why RM Auctions has become so popular. The auction house did a fantastic job at keeping the onlookers entertained and comfortable while the friendly bidding must have comforted the sellers, knowing that their lifelong treasures were admired by many and well worth the years of ownership.

About the Collection
There was something for everyone from Detroit Electric's, Custom European Coachwork, racing legends, Detroit Muscle, and more. Ever heard of an automobile company named Allstate? Sears Roebuck and Company only marketed two cars during their history, and Allstate was one of them. The other was the Sears Motor Buggy which sold to customers through their mail order catalog during the early 1900s. The Allstate Motor Company sold automobiles for only a few years during the early 1950's with a little over 2000 examples being produced. Another lesser known marque was the Rockne Motor Company which produced automobiles from 1931 through 1933. The story is rather sad with the name serving as a tribute to an individual. In 1931 Albert Erskine, the President of Studebaker, offered Knute Rockne a position as sales promotion manager of Rockne cars. Rockne was a long time friend of Erskine and the head coach of the Notre Dame Foolball team. Just after the first Rockne automobiles began appearing in showrooms Knute Rockne was killed in an airplane crash. The name persisted and used as a tribute, but most people were unwilling to purchase the cars which nearly sent the Studebaker Company into bankruptcy.

There were several rare and collectable Ford Mustangs including a 1966 Shelby Hurtz GT350 Fastback. In 1966 the Hertz Rental Car Company purchased 1000 cars. The Hertz Company had founded 'The Hertz Sports Car Club' which provided a limited number of high performance rental cars to customers. The cars could be rented by virtually anyone as long as they were over the age of 25 and were capable of operating and controlling these machines. Most of the cars were adorned in black paint with gold stripes. The first batch of cars were equipped with manual transmission but the company quickly changed that policy to automatics after many cars were returned in less-than-perfect condition. It must have been hard to return one of these machines with a straight face knowing the abuse the automobile must have suffered during the weekend.

There were only 15 Ford Shelby Mustang GT350R models produced in 1965. GT350R with chassis number SFM5R102 was driven by Bob Johnson to an SCCA B/Production National Champion in 1965, the beginning of an impressive racing career for the automobile. On auction day it fetched $900,000.

It is always great seeing custom coach-built cars such as Rolls-Royce, Bentley, Duesenberg, and Pierce-Arrow, to name a few. There was a 1933 Pierce Arrow Twelve Model 1242 Convertible Sedan that had won the Best American Open Car Award this past year at the Greenwich Concours d'Elegance. The 1931 Bentley 8-Liter Sportsman Coupe Gurney-Nutting won the 1932 RAC Best Coachwork Award and the 1999 Best in Show of the Louis Vuitton Classic at the Hurlingham Club. In addition, it has won a number of BDC Awards and a Second in Class at the Pebble Beach Concours in 2001. The 1937 Pierce Arrow Model 1702 Metropolitan Town Brougham by Brunn was finished in two-tone color paint and is an excellent example of early American luxury specifically designed to be chauffeur driven with the owner comfortably riding in the spacious rear. The 1937 Rolls-Royce Phantom III Sedanca De Ville by Mulliner, also finished in two-tone colors was another chauffer driven car with the passengers completely isolated from the driver thanks to a wind-up divider glass window.

A 1960 Ferrari 250 GT SWB Alloy Berlinetta Competizione demanded $2.5 million. It has an extensive racing career that included a 1st at its inaugural race that transpired on June 12, 1960 at Coppa Borzacchini. Many races and hill climbs soon followed with the 250 GT SWB leading the pack in most of its entries. A 1938 Talbot-Lago T23 Teardrop Coupe with coachwork by Figoni & Falaschi was another high seller with a $1.95 million dollar price tag. It was the winner of the Concours d'Elegance de l'Auto in 1938. Perhaps the most exquisite show car of the day, its French curves and teardrop bodystyle gave the illusion of motion even at a standstill. The streamlined body and aerodynamic design increased the overall fuel-efficiency of the vehicle, enhancing its performance and handling, and propelling the design years into the future.

'Beauty is in the eye of the beholder.' A unique 1928 Chevrolet OGTS Barrel-Back Speedster was offered for sale, one of the more unusual vehicles of the day. Its creation was a true labor of love that took over six years to create. Its body and interior are made of wood strips cut into 3/8-inch to ½-inch thick and either glued or screwed together. The wood was actually scraps purchased from a nearby factory. Each week the owner would visit the factory in search of suitable wood. The result was nothing less than stellar. Understanding its history and the time that went into creating the rolling wooden automobile gives a new found respect and admiration for the Barrel-Back Speedster.

One of the more interesting stories was of the 1953 Hudson Hornet Twin H-Power Sedan. Its owner used it to race in hill climbs. Its powerful engine, low center of gravity, and stiff suspension made up for its size and weight, easily beating the rest of the competition, which usually consisted of smaller cars such as MGs, Triumphs and Jaguars. Mustang and Firebird owners were astonished and embarrassed when the six-cylinder Hudson, dubbed the 'Satan of Morimar' - a name it was affectionately called - produced far better times then they could muster. At auction it was estimated to sell between $30,000 and $40,000. Bidding made a mockery of that estimate, both inspired by the history of the car and the understanding that all proceeds went to charity. The final bid was $110,000, much to the delight and admiration of the crowd.

About RM Auctions
Founded in 1976 the RM Auctions Company was established to perform automotive repair and restoration. By the early 1990's the company had expanded to auctions and has since become Canada's oldest and largest indoor car auction. In 1994 they were invited to participate in the Meadow Brook Hall Concours and in 1999 became part of the Amelia Island Concours d'Elegance. Since then they have continued to grow in size, prestige, venues, and offerings, and are by far the largest commercial enterprise in the collector car world.

The RM Auction complimented the Amelia Island Concours d'Elegance by showcasing, what we believe, to be future entrances in car shows, racing events, and concourses around the country. The location was stunning, the weather was fantastic, the auction company was well versed in the history of the automobiles, and the bidding was captivating. We felt a bit sorry for the auctioneer who directed the entire auction for nearly 7-8 hours. His voice must have been sore the following morning but he did a marvelous job. We would like to thank the sellers and the buyers of the automobiles, RM Auctions, the Ritz-Carlton, Amelia Island Concours d'Elegance, volunteers, workers, and everyone who made this event happen. It was inspiring to listen to Mr. Lobzun, an employee of RM Auction working in their Creative, PR and Sponsorship department, energetically and passionately detail the history of the Hudson Twin H-Power Sedan. It was immediately obvious that the employee's of the RM Auction company not only are good at what they do, but have a deep appreciation and respect for the automobiles that they sell. We were honored to be in attendance to photograph and document this wonderful event. Please enjoy the coverage and we invite you to visit the RM Auction web site for further information about the weekend activities, the vehicles that they auction, and upcoming events.
Galleries
1900-1920