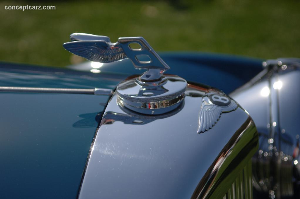 April 2006
There was a surprise waiting for the attendees on the second day of the media preview at the New York Auto Show. In the main lobby were a handful of Bugatti's dating from 1927 to 2006 and bodied by some of the most famous coachbuilders of their day. The 1927 Bentley Tourer is thought to be the only surviving Harrington-bodied Bentley 3-Liter in existence today. The 1929 Bentley Speed Six convertible body is modeled on a design by the famous Belgian coachbuilders Vanden Plans. The 1936 Bentley 4.25 Drophead Coupe is one of only 13 DHC's created by coachbuilder James Young. This car is one of two similar designs, the other built for the famous racing driver Prince Bira of Thailand. The 1939 Bentley Mark V Saoutchik is the only convertible Mark V, and in August 1939, it was originally intended for the sister of King Farouk of Egypt, but at the outbreak of World War II, the chassis was hidden in France. In 1940, the chassis was fitted with a body by the French firm Carrossier Saoutchik and completed within two months of the German invasion. The 1948 Bentley Mark VI was bodied by Garber Carrosserie in Zurich, Switzerland. It has remained a one-off with specially designed safety glass which refracts light to avoid glare. It has been a winner at both the Pebble Beach and Meadowbrook Concours events.
Galleries
The Vehicles