The Elegance At Hershey 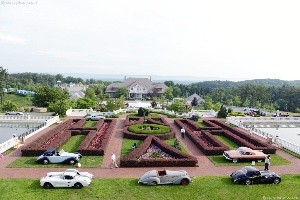 June 2013
The Elegance at Hershey brings together some of the world's finest collector cars to 'The Sweetest Place on Earth.' The event is held at the formal gardens at the historic Hotel Hershey, in Hershey, PA. The show field, which is limited to no more than 60 automobiles, displays some of the finest cars from every era.

The earliest car on the field was a 1911 Mercedes Model 50. It was purchased by the current owner in 1955 who has driven the car over 65,000 miles since that time, including 20 Glidden Tour revivals. The 1928 Gardner 85 Sport Roadster was one of an estimated 800 produced. The example at The Elegance is the only model said to still exist. The 1933 Duesenberg SJ Beverly Sedan on display was an authentic example of an enclosed Duesenberg and one of only five enclosed SJ's ever made. The car has retained its original body and engine and its entire history is documented.

Later models included the 1959 Ferrari Cabriolet by Pininfarina. It is one of only 40 built and was originally owned by Georges Filipinetti, of Geneva, Switzerland, founder of Scuderia Filipinetti, the renowned racing team of the 1960's.

Two Packard concepts were in attendance, the 1953 Packard Balboa Concept and the 1954 Packard Panther Daytona Concept. The Packard Balboa was designed by Richard Teague and was originally known as the Balboa-X, with the 'X' representing 'experimental.' The Panther Daytona Concept, also styled by Richard Teague, was driven by noted race driver Jim Rathmann at the annual Speed Weeks action at Daytona Beach in February of 1954 where he set an official 110.9 mph on the sand while recording an unofficial 131 mph. Called the Gray Wolf II, it took its name from the record-setting racer of 1903 and 1904 giving a 50th anniversary purpose to the car as well. It is powered by Packard's 359 cubic-inch inline Eight equipped with a McCullough supercharger thereby boosting output to a claimed 275 horsepower.

Awards
The most elegant automobile, as determined by a group of elite judges, selected a rather unconventional choice. Breaking tradition, an unrestored 1938 Alfa Romeo 8C 2900B owned by Robert and Sandra Bahre, won the coveted 'Governor's Cup Best of Show.' The car was arguably one of the most elegant and graceful vehicles on the show field, but its unrestored condition had many questioning throughout the day if it would be a contender for top honors. The Alfa Romeo has its original seats which are now cracked and faded. The paint, in similar fashion, is not as vibrant as it once was when it was new 63 years ago. Its win certainly signals a shift and greater appreciation for unrestored, original vehicles.

Clearly, its raw beauty and rarity (just 22 Alfa 8C 2900B models were produced in 1938 and just 5 were built in the Corto, or short, 110-inch platform) were enough to earn the respect of the judges.

The Founder's Award and People's Choice went to the 1937 Delage D8 120SS two-door Aerodynamic Coupe by Letourneur et Marchand owned by Jim Patterson. The exceptional one-off short chassis coupe was ordered for a European prince. Immediately after World War II, it was part of the famous Gerry Albertini collection in London and was then acquired by the Blackhawk Collection. It is arguably one of the most stylish and elegant pre-war coupes built.

Charity
The Elegance at Hershey events raise money for JDRF, (The Juvenile Diabetes Research Foundation), the AACA Museum and the AACA Library and Research Center in Hershey.
Galleries
1911-1929
1930-1937