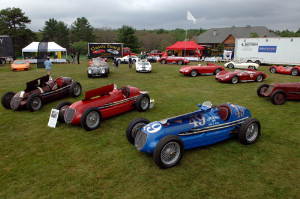 The vehicles are distinguished and admired for their beauty and their performance. The marques and their classic and modern vehicles in attendence are some of the fastest sports cars in the world - proven by their dominance on many racing circuits including the prestigious 24 Hours of Le Mans.

The weather cooperated but just barely as storm clouds threatened the entire morning. Boldly, owners left their vehicles uncovered and many with the interiors exposed. Throughout the early part of the morning the cars were arranged and then re-arranged on the show field. As the remained of the vehicles rolled-in around mid-morning the area that once appeared desolate was filled with marvelous works of art.

This year's special guest was the former Pininfarina and Ghia designer Tom Tjaarda.

The Le Belle Macchine d'Italia is more than just a concours gathering. There are two full days of racing at the Pocono International Raceway's 2.5 mile road coarse offering challenging terraine that truly test the cars and drivers abilities.

The Skytop Lodge was built in 1925 as an Executive Retreat. Since then it has maintained its luxurious ambiance while providing modern amenities. The location is a perfect complement to these Italian masterpieces.

Judging
The judging for awards is performed by clubs representing each marque. Each marque is divided into classes and evaluated under standards set by the individual clubs. The class winners within each marque are then judged against one another for the honor of 'Best of Marque'.

The winners of the 'Best of Marque' are then presented to the Board of Directors of Italian Cars and the Event Officials. From these finalist is chosen a winner of the Coppa d'Bella, Best of Show. The Concorso d'Eleganza is the only event during Le Belle Macchine d'Italia that is open to the public.

On display was a Maserati Tipo 26B M 8C Gran Prix which is the oldest running unrestored Maserati in the world. The Aston Martin DB3 made history at Sebring, Le Mans and many other racing. The Ferrari FXX and Maserati MC-12 were some of the modern supercar highlights. There were a couple of Maserati Tipo 61 Birdcages and a Tipo 63/64 Birdcage. Lamborghini Diablo, Countach's, Jalpa's, Gallardo, Murciélago, and Islero to name a few. There were probably a dozen DeTomaso Pantera's with styling by Tom Tjaarda and powered by Ford. Right next to them were the Corvette powered ISO Grifos. These were but a few of the vehicles on display.

Highlights
The highlights for the show were many. The only three Maserati 8CTF vehicles ever created were on display and placed side-by-side. Directly behind them were a collection of Maserati Tipo 61 and Tipo 63/64 Birdcages. Arranged only a few feet away was two modern masterpieces: Ferrari FXX and Maserati MC-12. These are but a few of the vehicles that were on display.

Maserati Birdcage
The Maserati company was established in 1926, but it would not be until many years later that Maserati would become a major builder of road cars. The company was founded by five of the six Maserati brothers (the sixth became an artist). The company's primary products were spark plugs and other automotive components, but they also built (and raced) race cars. The Maserati company was purchased by Commendatore Adolfo Orsi in 1938, but he retained the services of the Maserati brothers for ten more years.

The Maserati 'Birdcage' was so-named because of the thin, intricate tubular structure that made up the frame.

The Typo 60 and 61 models, which were front-engined, were the first to use this structure. Typo 63, which was rear-engined, also used a similar structure. However, the rear-engined Typo 64 had an even more intricate structure using even thinner tubing, and its deDion rear suspension was also of a similar design, causing the car to be nick-named the 'Supercage.'

Maserati 8CTF
The 8CTF was Maserati's challenge to the all-conquering dominance of Germany on the Grand Prix scene of the thirties. Given the height to which Auto Union and Mercedes had raised race car engineering, the challenge, unsurprisingly, was not successful. However, the display car gave the vaunted German teams pause for though, if not cause for alarm, however briefly.

Two factors made the 8CTF possible; a new and complicated International formula crafted with the single purpose of curtailing the German juggernaut and the acquisition of Maserati by Italian industrialist Adolfo Orsi which put the Maserati brothers in charge of the cars and the Orsi family in charge of management, at which the brothers had never excelled. The 8CTF was the first result of the collaboration.

Compared to the ultra sophistication of the German competition, this was a return to basics. But speed is among the factors that wins races, and the unpretentious 8CTF was a very fast car in 1938. This was demonstrated in its first outing, at Tripoli, when Count Felice Triossi put up a 131.2 mph lap in the display car and took the lead on Lap 9 only to retire soon after with transmission problems. The rest of the season became an ongoing deja vu as the Maserati left starting lines handsomely and then broke down, usually well before the finish.

Ironically, the 8CTF enjoyed a far more rewarding career in the United States, winning Indianapolis twice and Pikes Peak once beginning in 1939 with Wilbur Shaw's 500 victory driving 3032 (the third 8CTF, modified for the 1939 season). Subsequently Lucy O'Relly Schell bought 3030 and 3031 for her Ecurie Bleue team, shipped them to the States, and signed up French racing champion Rene Dreyfus and Rene Le Begue to drive them in the 1940 500. Dreyfus drove 3030 during practice, broke a connecting rod, co-drove 3031 with Le Begue in the race to finish tenth and collect $1400 in prize money. Both Schell cars were sold after the race, 3031 ultimately fitted with an Offy engine, 3030 resolutely loyal to its Maserati straight eight and enjoying Indy drives by Russ Snowberger and Duke Nalon and a Pikes Peak climb by Louis Unser. The old war horse remained on the track until the early fifties.

Conclusion
Seeing all three Maserati 8CTF vehicles side-by-side was special. Though we have seen many of these vehicles before at other shows the location and setting of this event offered something unique and precious. The location of the Skytop Lodge is remote within the Pocono's Mountains. The drive is along many winding country roads with many relaxing and breathtaking views. It was understandable that the attendance numbers was below that of other major shows that transpires in major cities. The setting was both calm and intimate, with a crowd that was present but not overwhelming, and a show field that was extensive but elegant. Spectators casually strolled from car to car admiring each for its technical prowess and beautiful body-shell. Though some vehicles got more grins and attention than others - all were there for a reason backed by a heritage that is virtually unmatched by any other automotive group.
Galleries
Highlights
Alfa Romeo
Aston Martin
DeTomaso
Ferrari 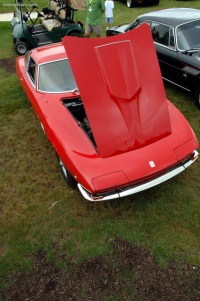 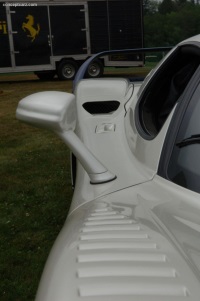