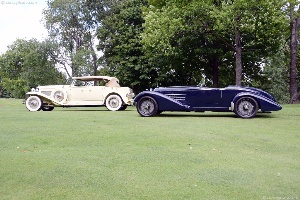 July 2013
For its first 32 years, the Concours d'Elegance of America was held at Oakland University's Meadow Brook Hall. Beginning in 2011 this world-class event moved to a new location - the Inn at St. John's in Plymouth, Michigan.

The 2013 Concours d'Elegance of America was held on the 28th of July. The Inn at St. John's and its well-manicured lawns played host to the luxury vehicles that were assembled and arranged into 22 groups. Activities preceding the event including Hall of Fame Induction & Awards Celebration, an auction presented by RM Auctions, a Motoring Tour of The Lingenfelter Collection, a VIP Tour of the Adderley Collection, a Concert in the Park at downtown Plymouth, seminars, and a cocktail party.

This year's featured classes included London to Brighton, Auburn/Cord (the one-offs), Detroit Iron, Indianapolis Iron, Can-Am, Vintage NASCAR, Electric Cars (Past, present & future), Mercedes-Benz Pagoda & 600, Porsche 911, the Great race, Jet-Age Convertibles, and the 50th Anniversary of the 1963 Corvette. All of these classes, including the traditional classes, feature some of the finest examples in existence.

Owners of 374 cars arranged their cars on the field after rain showers delayed the Saturday set up. While exact numbers are not yet known, the crowd was estimated at over 10,000.

Best of Show
The Concours d'Elegance of America awards two Best of Show honors; one for an American and another for a European car. Best of Show: European was awarded to an Alfa Romeo 8C 2300 Boattail Speedster owned by Roger Willbanks. The car began life in August of 1934 serving as a factory show car with a Castagna drophead coupe body. After the show season, the car was imported into Britain by London Bentley Dealer Jack Barclay in March of 1935. It was then sold to a gentleman racer Roy Gibson in April 1935. His needs required an alloy sports body for the chassis. The work took eight months of construction and when it was done, it looked like no other Alfa. The car passed through several owners before Angela Cherrett, noted 8C author and expert, purchased the car in 1964. The car remained in her care for the next 45 years.

The Best of Show: American award was bestowed upon Joseph & Margie Cassini, III's Duesenberg Model J Tourster Derham. The Duesenberg is one of the few retaining the original body, chassis, engine and other major components. When new, this was the only Model J equipped with vertical hood louvers. The SC-specification external exhaust pipes provided period flair and performance is enhanced by an exhaust system dump at the flip of a lever on the floor.


RM Auctions
RM Auction's held a single-day sale at the Inn at St. Johns for 77 automobiles, two boats, and one motorcycle, generating more than $7.7 million in sales with a strong 90 percent of all lots sold. The top honors for the sale went to a 1929 Duesenberg Model J Dual-Cowl Phaeton, garnering $682,000. A 1932 Packard Individual Custom Eight Convertible Victoria and a 1932 Packard Twin Six Sport Phaeton coming in second and third place, achieving $374,000 and $330,000 respectively.

'We were very happy with the results of this year's sale, a 90 percent sell through rate shows that quality motor cars continue to bring strong prices at auction,' says Gord Duff, car specialist, RM Auctions. 'We've received a tremendous amount of positive feedback about the auction roster and venue and were once again honored to work with such a great team at the Concours d'Elegance of America at St. John's. Together, the two events made for an exceptional weekend for enthusiasts and collectors from five countries and 30 states across the U.S.'.

About The Inn at St. John's
The Inn at St. John's is a facility rich with history and beauty. Its story begins in the late 1940s when St. John's Provincial Seminary opened its doors. In 1955, its remarkable chapel was dedicated. The seminary continued to serve the Catholic Archdiocese of Detroit until 1988, when it closed. The property remained dormant until 1994, when Cardinal Adam J. Maida brought to life a vision of reviving the property as a resource for diocesan youth and families. His vision became reality when, in 1996, St. John's Center for Youth & Family opened on the South side of the property.

The rebirth of the historic facility surged again in 1998, when work commenced on an $11 million redevelopment of St. John's main buildings into a comprehensive center for corporate and social conferences, Catholic weddings and celebrations. Upon completion of the careful restoration process, October 2000 marked the Grand Opening of St. John's Golf & Conference Center.

With a new name that encompasses the entire growing property, The Inn at St. John's is pleased to announce another exciting addition as of December 2005 — our Grande Ballroom. The largest ballroom at the conference center, with seating for up to 450, The Grande Ballroom is a spectacular space that features a traditional color palette, signature china and time-honored furnishings.

An even more dramatic piece of St. John's history took place in January 2006; the opening of The Inn at St. John's hotel and restaurant addition. This upscale property features 118 luxury guestrooms and offers every convenience of a large hotel in an intimate setting. As a boutique hotel, we look forward to assuring guests our personal attention, exceptional amenities and service that will exceed their every expectation.

The Concours is proud to contribute a portion of its proceeds to Hospice of Michigan, Leader Dogs for the Blind and College for Creatives Studies.
Galleries
London to Brighton 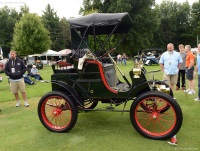 Racing Through the Ages

50th Anniversary of the 1963 Corvette