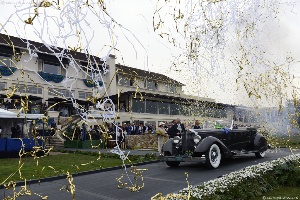 August 2013
• THE BEST OF SHOW: TRADITION, EXCELLENCE, STYLE AND PASSION


Monterey Classic Car Week attracts a collection of the world's finest vintage automobiles to the Californian peninsula each year. The 2013 event was bathed in sunshine, and proved a dream come true for any motorsport enthusiast, a feast for the eyes and a celebration of tradition, excellence and human achievement. There was something for everyone and although most owners did not come to win prizes but rather to indulge in their passion, there was plenty at stake. This is especially so at the most prestigious of the rendezvous: the Pebble Beach Tour d'Elegance presented by Rolex, The Quail, A Motorsports Gathering, the Pebble Beach Concours d'Elegance, and the Rolex Monterey Motorsports Reunion where recognition is the ultimate endorsement.

A notable presence during the week was the legendary Sir Jackie Stewart, one of the greatest Formula 1 drivers of all time. Sir Jackie, Rolex Testimonee since 1969, is an Honorary Judge at the Pebble Beach Concours d'Elegance, returning this year after a long hiatus: 'Unquestionably the Monterey Classic Car Week is the biggest and the best in the world,' he commented. 'The Concours d'Elegance is extraordinary, with a wonderful collection of cars of all vintages from every corner of the world. I hadn't seen the Tour before and I was very much taken by it – it has another dimension, it's much less formal and it attracts only the real aficionados.' With so many cars on show, judging at these events cannot be that easy, but Sir Jackie made it sound simple: 'It's not as difficult as you would believe. Sometimes cars are overdone, while other cars that have been left in their natural condition are magic to look at. It's not how much you spend on the car that makes you win, quite the opposite. It's a fine balance.'

Pebble Beach Tour d'Elegance Presented by Rolex
Pebble-Beach-Concours-dElegance-and-Pebble-Beach-Tour-dElegance-presented-by-Rolex Instituted in 1998 as a way to celebrate cars in motion rather than static museum pieces, the Pebble Beach Tour d'Elegance presented by Rolex saw more than 200 vintage cars parade on a 88-mile course along the famed 17-Mile Drive, winding through the Central Coast including, for the first time in a decade, the Corkscrew turn around the track at Mazda Raceway Laguna Seca. The cars then made their way down to Big Sur and back, ending up in Carmel-by-the-Sea for lunch and offering the crowds of enthusiastic spectators a rare chance to carefully admire these lovingly preserved vehicles. The Tour is an integral part of the Pebble Beach Concours d'Elegance, which this year celebrated its 63rd edition. It is the sheer joy of driving their cars that draws the owners to this event. Larry Tribble from Connecticut is the proud owner of a magnificent Art-deco style 1940 Lincoln-Zephyr Convertible. As some of the cars struggled on the steep hills of the Tour, Tribble commented: 'You can't just hop in these cars and drive them. It takes a lot of preparation.'

The 2013 Monterey Classic Car Week had many firsts. Visitors were able to admire in its full glory a rare piece of automotive history: a 1921 Duesenberg A Bender Coupe, the first production Duesenberg ever built. The car has been in the family of James Castle Jr. of California for six generations, but had fallen into disrepair. 'My dad loved the car,' explained Castle. 'I felt an obligation to restore her. We like to share our passion and bring these cars out for everyone to enjoy.'

The Quail, A Motorsports Gathering
From the lawns overlooking the beautiful beach of Carmel-by-the-Sea, the focus of Monterey Classic Car Week shifted to the exclusive and luxurious setting of The Quail, A Motorsports Gathering, where Rolex has been Official Timekeeper since its inception in 2003. The show offered an exceptional collection of over 200 cars and motorcycles, alongside an epicurean journey with six international culinary pavilions. The event began with the Quail Run, where a collection of Chevrolet Corvettes paraded over steep and winding roads from Mazda Raceway Laguna Seca to the Quail Lodge. Highlights included 100 Years of Aston Martin, A Retrospect of Automobili Lamborghini celebrating 50 years, and A Tribute to the Automotive Designs by Peter Brock.

Fittingly, the coveted Rolex 'Best of Show' title was awarded to a 1964 Shelby Cobra Daytona Coupe designed by Brock. 'My cars have received many recognitions in the past, but today is a very special first - being recognized here is truly unique,' commented Brock. Brock was rewarded for his exceptional talent with a Rolex Oyster Perpetual Cosmograph Daytona, a timepiece inextricably linked to the world of motor racing and for which 2013 marks the 50th anniversary. Judging at The Quail is as unique as the event itself: the entrants elect the winning car considering design features, technical interest and accurate restoration. 'It's hard to choose among all these beautiful cars,' said Michael Drobot, owner of an iconic 'Bond car', a convertible 1965 Aston Martin DB5 Vantage. While 007 and all things associated may be considered masters of style, Bugatti offers the essence of luxury, highlighted by the brand's stunning display of an ultra-modern clear-coated carbon fibre Bugatti Legend 'Jean-Pierre Wimille' next to the original Bugatti 57G Tank which won the 24 Hours of Le Mans in 1937 with Jean-Pierre Wimille at the wheel: a perfect match of innovation and tradition.

Rolex Monterey Motorsports Reunion
The thrill of racing wheel-to-wheel is the theme at Rolex Monterey Motorsports Reunion, described as a 'museum springing to life' and a cornerstone of the Monterey Classic Car Week. 550 historic vehicles raced on Mazda Raceway Laguna Seca circuit, known for its hairpins and challenging drops in elevation. The spectrum of entrants covered nearly every era, dating as far back as a 1911 National 40, and also included 26 magnificent Formula 1 Grand Prix cars from the period 1966 to 1984. All the famous racing manufacturers were present, such as Ferrari, Maserati, Jaguar, McLaren, Aston Martin, Porsche, Bugatti, Talbot Lago, Alfa Romeo, Ford. But it was the iconic Chevrolet Corvette, widely hailed as America's Sports Car, which stole the limelight as the featured marque in celebration of its 60th anniversary.

This year's Rolex Monterey Motorsports Reunion had a strong international flavour, with nine nations - Australia, Brazil, Canada, France, Germany, the Netherlands, South Africa, the United Kingdom and the United States - represented. 'The Rolex Monterey Motorsports Reunion is the largest event of its kind in the United States and second in the world only to the Goodwood Revival,' said CEO/General Manager Gill Campbell. The 'most deserving' drivers, as determined by an independent panel, receive Rolex Awards of Excellence while the event's highest honour the 'Spirit of Monterey' and a Rolex Oyster Perpetual Cosmograph Daytona goes to the driver who excels in the spirit of the weekend. No one could match the spirit of octogenarian John Harden of Oklahoma. Harden first raced in Monterey in 1953 in one of the Pebble Beach Road Races and this year was racing a 1963 Genie Comet Mark VIII. It was appropriate, he said, that where he raced his very first race should be the same place he raced his very last, having officially retired following this year's run.

Pebble Beach Concours d'Elegance
At dawn on Sunday, 248 cars including 48 non-American entries, rolled onto the famous 18th fairway of Pebble Beach Golf Links for the ultimate test of precise restoration – the Pebble Beach Concours d'Elegance. Vehicles are judged for historical accuracy, technical merit and style, but not for their speed - although one of the key criteria is that all cars must be drivable. The 2013 Concours celebrated Lincoln, Simplex, Vanvooren Coachwork, Aston Martin, Lamborghini, Porsche 911, BMW 507, Indianapolis Roadsters and French Motorcycles. Notable displays included gatherings of four Prinz Heinrich Benz Race Cars, 27 Alfa Romeo 8Cs, and a pair of custom-built BMW 507s, the only two built.
Aston Martin celebrated its centennial as well as the 90th anniversary of Le Mans with a display of cars that raced the storied course. Legendary Pink Floyd drummer Nick Mason was exhibiting his 1953 Aston Martin Ulster. Mason commented: 'I don't come here to win prizes – I've seen the standard of the cars! It's an honour to be included on the lawn, just to have the cars here is great. This is an extraordinary event, with a lot of history.'

The 2013 Concours also celebrated Lamborghini's 50th anniversary, The brand's Communication Director Raffaello Porro explained the connection behind its two cars featured on the Concept lawn: 'These are the first and the latest produced by our marque. The Lamborghini 350 GTV Coupe was the first ever concept car presented by Ferruccio Lamborghini at the Turin motor show in 1963.' The Lamborghini Veneno was launched at the Geneva Motor Show in March and only four will be built.

The oldest car on show was a spectacular 1906 White Model F Roi des Belges Touring owned by the Conzonires from California, who dressed in period costume for the occasion, Joe Conzonire remarked: 'This was the first vehicle that the White House bought to replace horses.'

The automotive extravaganza on California's Monterey Peninsula ended with the much-awaited 'Best of Show' Concours award. Presented to a 1934 Packard 1108 Twelve Dietrich Convertible Victoria, owned by Joseph & Margie Cassini III of New Jersey. Cassini won before in 2004, but this win was even more emotional: 'This is the Olympics of car shows, and you would never think that you could win twice.'

Rolex has been involved in Monterey Classic Car Week since 1997 and the event forms a significant part of its association with the cardinal elements of motor sport, such as pursuit of excellence and technological innovation.
Galleries
Concept Lawn