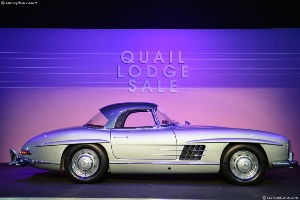 The Bonhams pavilion, situated on the spacious western lawns of Quail Lodge in sunny Carmel Valley, hosted an incredibly busy viewing in a lovely garden party atmosphere. Buyers from around the world came to view some of the rarest and most important cars ever offered, which resulted in a packed salesroom on auction day. 'It was the most attended preview and auction in memory,' said Bonhams Group Director of Motoring James Knight.

The most popular car of the auction in terms of consistent crowds of admirers and cameras, as well sales price, was the utterly distinct 1931 Bentley 4.5-Liter Supercharged Le Mans racer from the Charles R.J. Noble Collection. Spirited bidding in the salesroom and on the telephones elicited excitement among the crowd as the car realized $4,647,500 from a private European buyer, resulting in a new record for a production blower Bentley.

Another crowd-creating and news-making car, the stunning one-off 1954 New York Auto Show, 1953 Ferrari 250 Europa Coupé by Vignale, made the audience erupt in cheers as it achieved an astonishing result and sold for $2,805,000.

The incredibly original Car and Driver test car 1962 Shelby AC Cobra from the Stan Hallinan Collection also achieved a new record for the model as it brought $2,068,000 to the delight of all in attendance.

Furthermore, more than $1.6 million was realized for the automobilia section, always a popular attraction at Bonhams' sales, with a Ferrari 625 LM 2.5-Liter 4-cylinder engine selling for $326,500 and a rare 1925 Lalique Comete glass mascot making $120,100.

'We achieved outstanding results for exceptional motorcars and demonstrated once again the strength of the highest end of the market,' said Bonhams Group CEO Malcolm Barber. 'Our international team was on site servicing a clientele that spans the globe, and whether it's making records this month in California or last month in England, the Bonhams motoring group, as market leaders, is one of the finest anywhere.'

A complete list of sales results is available at bonham.com/quail.
Galleries
The Vehicles