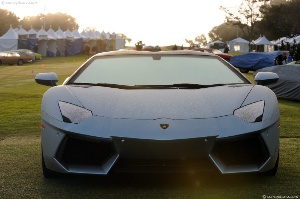 August 2013
The 28th annual Concorso Italiano, the world's largest showing of exotic Italian cars, celebrated the 50th anniversary of Lamborghini and Apollo. Along with the two bicentennials, the event celebrated two new models of the Fiat 500 and the new Maserati Ghibli.

The Laguna Seca Golf Ranch played host to this year's event. Its gentle sloping fairways complimented the beautiful cars and perfect weather. As many as 1,200 collectible Italian and European automobiles, motorcycles and boats were in attendance. Roughly 130 of those were Lamborghini's, a very rare and special treat to see so many in one place at one time. With under 100 examples of the Apollo built during their production run, the 15 (as many as 17) examples that were in attendance at this year's Concorso Italiano made it a record gathering for the marque.

Fiat introduced their new Cattiva sports package that will be available on both the 500 Sport and 500 Turbo. The other introduction was the GQ Edition cabriolet which is scheduled to go on sale in January.

This year's winner of Best of Show was a 1969 Lamborghini Miura P400S, owned by mark Jansen of Brisbane, Australian. It is a very unique and special vehicle because it's only one of the few right-hand drive examples ever built. Lamborghini built 764 examples of the Miura, but just 20 were with right-hand drive.

The Best of Show announcement was a fitting tribute to Lamborghini's 50th anniversary celebration and to the organizers efforts to attract so many examples from the marque. Nearly every model from the company's history was on display - from the early 350GT to the newly introduced Aventador Roadster.

Next year, Concorso Italiano will have a new home. The event will return to the Bayonet Black Horse Golf Course and will be taking place on Saturday, August 16th. It will feature the 100 years of Maserati and the cars of Zagato.
Galleries
Alfa Romeo
Ferrari