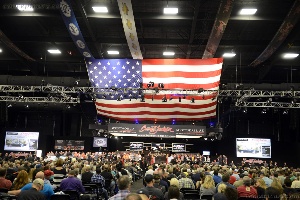 January 2014
Barrett-Jackson, The World's Greatest Collector Car Auctions™, announced today the strongest sales results in the 43 year history of the Scottsdale car auction. Over the course of six days, nearly 1,400 vehicles were sold at the Barrett-Jackson Scottsdale event totaling more than $113 million in sales. Barrett-Jackson's auction week attracted numerous celebrities, top car aficionados and collectors alike with some of the world's most valuable collectible and coveted vehicles. Among other notable celebrities, Sir Stirling Moss made an appearance and rode across the block in the third highest selling car, the 1955 Mercedes-Benz 300SL Gullwing Coupe.

'This was a huge year for Barrett-Jackson in Scottsdale. We kicked it off with a great opening night gala, christening the new Westworld facility. The Scottsdale auction had the highest sales in the history of our company – exceeding $113 million,' said Craig Jackson, Chairman and CEO of Barrett-Jackson. 'We sold some great cars for charity, attendance exceeded 300,000 and the celebrity turnout was great. Scottsdale 2014 witnessed an increase in the value of Americana cars as well as the general strengthening of the value of the cars we sold. We think that this trend will continue throughout 2014 and look forward to these increased numbers at our other 2014 auctions. As our brand becomes more global, as our reach enters new media markets and as consignors and bidders engage in our lifestyle events as well as our website, we anticipate strong participation at our upcoming auctions.'

'The diverse docket created for 2014 was one of my proudest moments with Barrett-Jackson. It reflected the diversity of the collector car hobby and the lifestyle it has created,' said Steve Davis, President of Barrett-Jackson. 'Our fans and bidders expect the ultimate Barrett-Jackson experience and that is exactly what we delivered. 'I am proud to say that once again the Barrett-Jackson team came through for charity including a total of $1 million dollars benefiting the Armed Forces Foundation, a cause very close to my heart.'

The opening night gala kicked off with much fanfare, including a Billy Baldwin auction of the ultimate 2015 Super Bowl package with all proceeds benefiting the Carol M. Baldwin Breast Cancer Research Fund, and a special performance by rock legend Bret Michaels that entertained guests well into the night. The evening was a grand kickoff to a week of incredible cars and activities that made the 2014 Barrett-Jackson experience one of the most memorable in the company's history. The opening night gala raised $160,000.

The week also lived up to Barrett-Jackson's strong legacy of working with the auto industry and motorsports to raise money for local and national charities. The company consigned a custom Ford truck benefiting The Children's Hospital Foundation of Saskatchewan Foundation. Rusty Wallace auctioned a car to benefit the NASCAR Foundation and Kurt Busch was present, supporting the Armed Forces Foundation. These unique cars, among the others that were offered for charity, raised over $4.4 million.

The auction culminated in grand style with two Guinness World Records being set for the largest single-unit marquee and the largest marquee. The auction was held for the first time at the all-new facility at Westworld of Scottsdale, a facility that included hundreds of exhibitors and non-stop entertainment. Outside of the auction block, attendees were anxious to take part in the incredible lifestyle experience, which has made Barrett-Jackson known as the 'World's Greatest Collector Car Auctions™'.

Barrett-Jackson Classic Car Auction Week, as proclaimed by the City of Scottsdale, attracted top car aficionados and collectors from around the world with some of the most valuable collectible and coveted vehicles. Among those vehicles was the world renowned Salon Collection. In total, these 16 vehicles sold for more than $22 million, with the highest selling vehicle being Lot #5035, a 1967 Corvette L88 2 Door Coupe which sold for $3.85 million, making it the most expensive Corvette ever to sell at an auction. Other vehicles that broke world records included Lot #5022 1967 Corvette L88 selling for $2.86 million and Lot #1053 1957 Thunderbird E Convertible which fetched $330,000.

Those unable to experience the auction in-person had several options for viewing all the action. FOX Sports expanded its viewership reach for the auction to include five channels – FOX Broadcast, the FOX Business Network, FOX Sports 1, FOX Sports 2 and the National Geographic Channel – totaling 36 hours and six consecutive days of live, high-definition auction coverage.