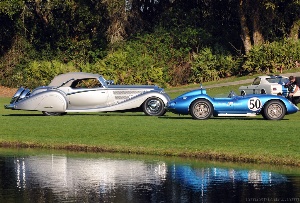 March 2014
The 19th annual Amelia Island Concours d'Elegance was held at the Ritz Carlton and the Golf Club of Amelia Island at Summer Beach, Florida. It is regarded as one of the premiere automotive events in the world and one of the most innovative shows due to its eclectic classes of unique vintage cars. The event showcases cars from private collections across the United States and the world. More than 29,000 automotive enthusiasts were in attendance to view over 330 cars and rare motorcycles, including some of the cars from this year's honoree, Jochen Mass. Mass is one of just 15 drivers to win the 24 Hours of LeMans and a Formula 1 race.

The 2014 Concours celebrated Maserati's 100th Anniversary with an array of models, including the 2014 Ghibli, representing the World Champion Italian grand marque's impressive heritage and future of the brand.

Some of the world's most prominent manufacturers had displays at the event, including Porsche, Mercedes-Benz, General Motors, Ferrari, Jaguar and Chrysler. Lamborghini held the North American debut of the company's newest super sports car, the Hurácan LP 610-4, on the Concours' field, following the vehicle's global debut at the Geneva Motor Show and Infiniti chose to celebrate the Amelia Island Concours by wrapping a 2014 Infiniti Q60 Convertible in the same color scheme as Bobby Unser's 1968 Indianapolis 500 winning racecar. The convertible was on display next to the original Indy winning car, courtesy of Infiniti and the Indianapolis Motor Speedway Hall of Fame Museum.

Packard's Concept Cars
'Ask the man who owns one' was Packard's slogan from the earliest days of the marque.

Ralph Marano, Sr., an orthodox Packard man of long standing, has been seized by one of the most dignified, delightful and elegant obsessions in the car collecting hobby. Ralph really likes Packard show cars. He likes them so much that he has collected all ten.

Marano's Packard collection numbers an astonishing 58 cars. His Packard show car inventory, all ten Packard concept cars from the 1950s, became the class, 'The Packard Concepts of Ralph Marano' at The Amelia.

Touchingly, Marano's newest Packard show car is the 1955 Request, the last of Packard's concept cars. The car earned its unusual name from the unexpected avalanche of letters delivered to Packard headquarters during the fifties asking for a return, or at least a reprise, of Packard's distinctive and famous vertical grill design of the thirties and forties. Packard's Chief Stylist Richard Teague acquiesced.

After a tour of Packard dealers following the 1955 car show season, the Request returned to Detroit just in time for the company to close its doors forever.

The Request was driven out of the factory and vanished for more than two decades. Marano found the car, with accident damage, sitting in a field. In 1983 it was restored and it re-debuted at the Packard Club annual convention in Oakland, CA wearing proper and correct Packard ivory and copper paint.

'Ralph Marano's Packard show car collection is something that can't be seen anywhere else,' said Mark Becker, Vice-Chairman of the Amelia Island Concours d'Elegance. 'The Marano Packard Concept class is the first time 'Amelia' has featured a class dedicated to the cars of a single personal collection. This is so rare that we even named the class for him. With the Chrysler Concept Cars class and Marano's Packards, there might be a light element of fifties-themed time travel to the 19th annual 'Amelia'.'

BMW CLS
BMW not only celebrated its past, but also its future at The Amelia.

The BMW CLS class included both the winners of the 1975 Twelve Hours of Sebring and the 1976 Daytona 24 Hour race. BMW Group Classic showcased the heritage of the BMW 3 Series in a display that featured a first-generation 3 Series in the US, the 320i, as well as the first BMW 3 Series Convertible. The BMW 320 Turbo race car, driven to multiple IMSA wins, poles, and track records in 1977/78 by racer David Hobbs was also a highlight. On display throughout the weekend was the company's very first exotic, the BMW M1, as well as the first generation BMW M3. Another highlight within the class of McLaren cars included the 1996 McLaren F1 GTR race car, with its 6.1-liter V-12 engine conceived and built by BMW M GmbH.

The 3.0 CSL race cars were the first cars to be developed under the then-new BMW Motorsport GmbH subsidiary, established in 1972 and led by Jochen Neerpasch. They were also the first to sport the new official colors of BMW Motorsport—red, purple and blue. Based on the production 3.0 CS coupe, the aluminum skinned CSL (L = lightweight) homologation special, nicknamed the 'Batmobile' by its fans, formed the basis for an assault on Group 2 through Group 5 European touring car racing that would make it one of the most successful production racers of all time.

A limited number of BMW 3.0 CSL models were produced and sold for street use in order to homologate the car for racing. The road-going BMW 3.0 CSLs featured in the class at the 2014 Amelia Island Concours d'Elegance included a car entered by Indy 500 winner and BMW Team RLL team principal, Bobby Rahal.

Fifty Years of McLaren
The Amelia Island Concours celebrated McLaren's 50th anniversary with a display or rare and significnat McLaren racers from five decades of competition.

Cars of Zagato Design
The cars wearing Zagato's 'lightning Z' badge have become classics and icons. The Amelia honored the brilliance and creativity of Ugo Zagato and his heirs with a class of Zagato-bodied cars from the likes of Ferrari, Maserati, Bugatti, Alfa Romeo, Abarth, Hispano-Suiza, FIAT, Rolls-Royce, Lancia, Lamborghini, MG, Bentley, Porsche, Spyker and even British supercar builder Aston Martin, for whom Zagato created their masterpiece, the landmark DB4 GT Zagato.

'The most beautiful car is the one that wins,' said Enzo Ferrari. As leader of Alfa Romeo's racing department during the 1930s, Enzo Ferrari saw fleets of Alfa Romeo racers wearing Zagato's functional and beautiful coachwork win scores of legendary road races.

Sons Elio and Gianni Zagato instantly grasped their father's elegant and simple philosophy; 'When we design and build something functional, it is always beautiful.'

Ugo Zagato signed his work with justifiable pride. His 'lightning Z' badge still rides on the flanks of many of the world's most exotic, desirable, successful, beautiful and fast cars. Zagato coachwork cloaked the first Formula 1 World Champions in 1950. They wore the winners' laurels in Enzo Ferrari's favorite race, the brutal and grueling Mille Miglia, where Zagato-bodied cars earned their global reputation from the very first '1000 miles' in 1927.

Beach Cars
'For an event like 'The Amelia' a class of beach cars is appropriate and ideal,' said Bill Warner, Founder and Chairman of the Amelia Island Concours d'Elegance. 'After all, when you take a break from the concours field and sit on the veranda at the Ritz-Carlton with a cool drink in front of you, you stare at the ocean and the beach. I just wish we could find a way to make the beach part of the concours field just this once.'

European and American beach cars were on display, include the Meyers Manx dune buggy created by California surfer, engineer and artist Bruce Meyers. Meyers sectioned the floor-pan of a VW Beetle and mounted an abbreviated monocoque fiberglass body with massive ground clearance and room to accommodate four fat off-road tires and two people. It broke the Baja 1000 record by four hours when Meyers put the truncated VW-based beach buggy to the test.

'I want to congratulate our panel of esteemed judges on this year's best of show selections,' said Bill Warner, Chairman and Founder of the Amelia Island Concours d'Elegance. 'Both cars are excellent examples of unique pedigree and provenance and are well deserving of their awards. We worked hard to bring the best in automotive elegance and sport to this year's event, and judging by our winners and the crowd I think we achieved our goal.'
Galleries
Cars of Jochen Mass