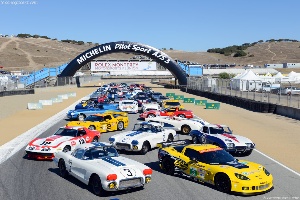 August 2013
By Daniel Vaughan
The Monterey Peninsula is transformed into the centerpiece of the motoring world each August with the convergence of several spectacular events, highlighted by the Pebble Beach Concours d'Elegance and the Rolex Monterey Motorsports Reunion. The first Pebble Beach Concours was held in 1950; twenty-four years later, historic race cars came to Mazda Raceway Laguna Seca. Since its inception, the one day event with 60 invited entries has grown to 550 significant historic race cars taking to the track over a period of several days.

Surrounded by undulating hills and just a short drive away from a blue ocean, Pebble Beach, Big Sur, and Carmel, the historic and picturesque Mazda Raceway Laguna Seca race track welcomed the Rolex Monterey Motorsports Reunion. The event celebrated 60 years of the Chevrolet Corvette and 50 years of the Porsche 911. Many of the cars that once raced professionally now participate in the Rolex Monterey Motorsports Reunion; each August is like a time capsule where some of the greatest motorsport gems are re-discovered.

The Chevrolet Corvette was this year's honored marque. In total, there were 45 Corvettes racing among the Reunion's 550 historic automobile entries, which raced in 16 groups and represented nearly every era of sports car racing. Corvettes were also celebrated in the Corvette Heritage Display which featured a collection of the most important cars in Corvette's evolution, starting with a 1954 car from the earliest 'generation 1' and ending with the 2014 Corvette Stingray C-7. An additional 350 Corvettes were on display in club corrals and 'Stingray Island,' including several rarely seen Corvettes such as the Mako Shark Corvette and Manta Ray Corvette Concept.

To celebrate Porsche's 50th Anniversary, a special Group - Group 8B (called the 'Weissach Cup') - was reserved to early Porsche 911 entries. Over forty examples were enrolled with around 30 taking part in the race. The Porsche Museum also took part in the celebration, performing demonstration laps with some of the most extreme 911 motorsport vehicles ever created. The list included a 2-liter 935 'Baby', the 935/78 'Moby Dick' and the 1998 Le Mans winning Porsche 911 GT1.

There were 39 pre-War cars that competed over the three-day Rolex Monterey Motorsports weekend, and 10 were new to this event. Two Nationals were at the event with one being the oldest car to compete; it was also a participant in the very first Indy 500. Another entry was a 1912 Packard that had just been given a restoration. The Alfa Romeo Tipo B (P3) racing around the track was the same car used by Tazio Nuvolari in his victory at the 1935 German Grand Prix.

There were 26 entries in the Formula 1 Grand Prix group from the 3 liter era (1966 through 1984) that took the grid just as the morning fog was beginning its ascent. The cooler temperatures made the 2.238-mile race course rather slippery making the race even more spectacular. The race was won by Dan Marvin in a Brabham BT 44. 'This race was a dream come true,' he said. 'Great car, great track and great event.' For a grey haired motorhead, it doesn't get any better than this. When I walk around here, it is such a cool place with such wonderful cars; historically, mechanically or design-wise, there is always something new and wonderful to look at.'

Another ground-shaking and highly-contested race was the Trans-Am (1966-1972) group. During its era, the Trans-Am Series was very competitive with some of the best American drivers competing on some of the greatest American circuits. There was great factory support and the cars were easily identifiable with the fans. Those cars and the accomplishments are still memorable and the fans still enthusiastically watch the epic battles unfold. Bruce Canepa driving an AMC Javelin was able to outpace Jim Hague and his Ford Boss Mustang 302 to take this year's checkered flag. The Chevy Penske Camaro driven by Bill Ockerlund finished in third.

Thirty-seven Formula Junior cars were listed on the schedule with 27 making it to the start line. The open wheel, single-seater formula racing category was created as an entry level class in the late 1950s where drivers could use inexpensive mechanical components from regular automobiles with power supplied by production-based engines. When the mid-engined revolution was underway, it was not long before this configuration was adopted to Formula Junior cars as the vast majority of race wins went to the British constructors of mid-engined cars. This year's Monterey Historics Formula Junior race was won by the mid-engined Lotus 27. The winning entry was driven by Danny Baker, followed by Nicholas Colyvas and Chris Locke.

Just as in past years, the Rolex Monterey Motorsports Reunion at Mazda Raceway Laguna Seca delivered the cars, the excitement, the crowds, the history, the legends, and three action packed, paint-to-paint, driven-in-anger, racing. Automotive enthusiasts learned new things about old cars and were able to witness historic race cars from nearly every era. The historically significant and period-correct vehicles were brought from nine nations including the USA, Australia, Brazil, Canada, UK, France , Germany, The Netherlands, and South Africa.
Galleries
1A : Pre-1940