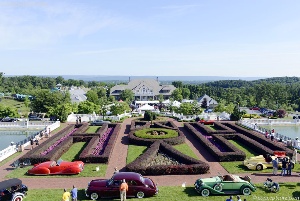 June 2014
The fourth annual presentation of The Elegance of Hershey was held in the beautiful backdrop of the Hotel Hershey in Hershey, PA. The large English garden, which includes fountain-laden ponds, well-manicured lawns, flowers, and beautiful porticos, certainly enhanced the ambiance and elegance of the automobiles.

More than sixty rare collectible vehicles from many eras were on display while talented and educated judges reviewed the participants' cars. Visitors to the event were invited to select their favorite vehicle in attendance - their 'People's Choice' award. The most elegant vehicle at the event, as chosen by 'the people', was the 1954 DeSoto Adventurer II Concept owned by Paul Gould. The vehicle was a design exercise that was built by Ghia for Chrysler. It was given features of a European GT coupe with power from an American-built engine. The design was courtesy of Ghia engineer/designer Giovanni Savonuzzi under the guise of Chrysler's head of styling, Virgil Exner. It made its debut at the Turin Auto Show and in late-1956 it was the centerpiece of the Brussels Auto Show in Belgium.

The judges selection of most elegant vehicle, and awarded with Best of Show honors (The Governor's Cup), went to the 1935 Duesenberg SJ Speedster, also known as the Mormon Meteor, owned by Harry Yeaggy. It was also the recipient of the 'Most Elegant American Open Pre-War' award. The car, which won Best of Show honors at the 2007 Pebble Beach Concours d'Elegance, is a masterpiece in all respects, from performance to design. It proudly carries the name of Ab Jenkins on its side, right in front of the driver's cockpit. Jenkins drove this Duesenberg Special to a number of land speed records at the Bonneville Salt Flats proving to all that its supercharged 420 cubic-inch eight-cylinder engine which produced an astonishing 400 horsepower was among the fastest automobiles on the planet.

The Founder's Award was presented to Mr. Cassini's 1931 Minerva AL. The car rides on a large, 152-inch wheelbase, is powered by a sleeve-valve eight-cylinder engine, and wears Convertible Sedan coachwork by Rollston - the only AL chassis featuring American coachwork.

The 1947 Delahaye 135M was awarded with the Hotel Hershey Award. It is one of a handful of 'narwhal' roadsters built by Figoni et Falaschi. It is so named as the nose-piece is reminiscent of the bump on a narwhal's snout. The car was shown at the contemporary Concours d'Elegance in France at the Palais de Chaillot and Bois de Boulogne in 1947. Other than a re-paint in the 1950s, the car has never been restored.

Having just received a restoration, Patricia Bittner Swigart displayed Verrill Wolfwagen Concept, which was the recipient of the 'Dawn of a New Era Award (Best Post-War)'. The legend states that its creator, Tom Verrill, wanted to built a car that would surpass the Bugatti Royale as the longest car in the world. The result of his work was a prototype vehicle that was both sensational and exotic. It was intended for production, but reality soon kicked-in and the realization that the car was too long to fit in the average garage put plans on hold. Thus, the Wolfwagen was never put into production and only one example was ever created.

Each car on display was very special; some had fresh restorations, others were slightly worn, and a few others were even original. The criterion for this invitation only event is loosely defined as the best cars. The focus for The Elegance is custom-coachwork Classics and unique sports/ racing and special interest vehicles with historical importance produced prior to 1960.

On Friday night racers, sponsors, car owners and assorted VIPs are treated to a Dinner and Charity auction at the AACA Museum.

Charities
The weekend's event raised money to help fund the JDRF (formerly known as Juvenile Diabetes Research Foundation) and to continue to protect the resource of the automotive heritage through the AACA Library and Research center and the AACA Museum.
Galleries
Prewar