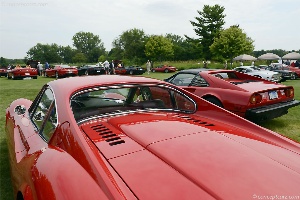 July 2014
This event, held on the day before the Concours d'Elegance of America at St. John's in Plymouth, enjoyed great weather and an equally impressive turn-out of auto enthusiasts. In attendance were cars from Lamborghini, Ferrari, Lancia, Dual Ghia, DeTomaso, and over 70 Alfa Romeo's. Along with a good amount of quantity, there was a great deal of quality. There was a plethora of examples that helped paint a picture of vehicles designed and produced in the country of Italy.

An Alfa Romeo Giulietta SS in attendance was the second of four SSZ prototypes produced. Only two still exist. It was the first car with a tilt front, has an early low nose configuration, lightweight body panels, and perplex windows. There was a great turn-out of competition Alfa GTA's. A sleek and exotic DeTomaso Mangusta rested in close proximity to a pair of DeTomaso Pantera's and was closely flanked by brightly colored Lamborghini's. Along with the modern Lamborghini's, there were three Lamborghini Jalpa's. The Jalpa's were the replacement for the Lamborghini Silhouette and they wore styling courtesy of Bertone who had used the styling-cues from the Silhouette. The result was a super car that was not as angular as its predecessor but with a more modern appeal. Like many other Lamborghini's, the name Jalpa was borrowed from a breed of fighting bulls. An eight-cylinder engine was mounted mid-ship providing 255 horsepower to the rear wheels.

With this being the second edition of this event, we did not expect it to be as good as it was. We were pleasantly surprised and really enjoyed the enthusiasm and turn-out.
Galleries
Alfa Romeo
DeTomaso