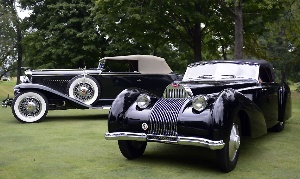 Plymouth, MI, July 27, 2014: Blessed by near perfect weather, on Sunday, July 27th, the 36th Annual Concours d'Elegance of America at the Inn at St. John's in Plymouth welcomed continuous crowds all day to the beautiful grounds, making its fourth year at its new home a success. More than 250 magnificent vehicles were on display for the public under blue skies. The Concours brought great diversity to the show field this year, featuring Jet-Age pickups, vintage drag bikes, the cars of Oscar Davis, and the work of designer Virgil Exner along with the American and European Classics.

The Concours d'Elegance of America is dedicated to the Genius of the Automobile. It is a unique celebration of exotic, beautiful and historically important automobiles and the people behind them: their innovations, designs and technology that influenced the world.

Keeping this mission in mind, this year's event featured an unmatched range of innovative, one-of-a-kind automobiles that include everything from the most famous European and American race cars in history including the 1919 Paige 6-66 Daytona Speedster Prototype and the first Nash-Healy Roadster, regarded by many as the first true American Sports car. A special exhibit of the break-through 'Forward Look' automobiles of visionary designer Virgil Exner delighted patrons. As Chrysler's first styling chief, Exner designed some of the most memorable show and production cars during the tailfin era. First up were the 'jet-age' 1955 Plymouths, Dodges, DeSotos, Chryslers and Imperials. Then came the 1957 models: With sky-high fins, these 'longer, lower and wider' dreamboats sent competitors scrambling to catch up. On display were carefully selected examples from each generation of the genre. Virgil Exner Jr., retired Ford designer and son of Virgil Exner, was an honorary judge.

Speaking of Forward Look, there was an unusual class that featured Jet Age pick-up trucks from the mid- to late-1950s. This display told the story of how the utilitarian pickup was transformed into a whole new kind of personal-luxury vehicle. Featured trucks included a 1955 Chevrolet Cameo Carrier, the first of the 'styled' pickups with smooth body sides and color-coordinated interiors. A limited-edition 1957 International Harvester Golden Jubilee and an ultra-rare (Canadian) Fargo Sweptside pickup delighted fans of Mid-Century Modern design. Other pickups in this 'Jet-Age' class were the Ford Ranchero and Chevrolet El Camino, both of which were highly styled 'car-truck' hybrids. Also making its St. Johns debut was the one-off factory-built prototype pickup from 1959, the Pontiac 'El Catalina.'

And, of course, the field showcased the magnificent Classic Era automobiles that The St. John's Concours, formerly the Meadow Brook Concours, has long been known for.

Another featured class was the Evolution of the Sports Car, with entries that included many of the most beautiful, heroic, and legendary sports cars ever conceived. Race-bred roadsters, 'one-off' design statements, and a host of definitive British and Italian GTs represented Europe's postwar best. Legendary Anglo-American hybrid sports cars included a fire-breathing Allard J-2 competition roadster and CSX 2196, the first Shelby 427 Cobra built.

Enthusiast of the Year
Mention the name Oscar Davis, and you'll hear accolades and respect. As a businessman, Oscar is the owner of New Jersey-based Hayward Industries - one of the world's largest manufacturers of residential pool equipment. They employ over 1,500 people within their two worldwide divisions.

As a collector with over 40 cars in his collection, Oscar has assembled one of the finest displays of European performance cars in the world. His newly-constructed museum is devoted to his collection of Ferrari, Maserati, Alfa Romeo, Talbot Lago, and Lancia among other collectible automobiles.

Over his many years of collecting, he has shared his passion by opening his collection to car clubs and taking his cars to events worldwide. This year, the Concours d'Elegance at St. John's honored Oscar as their Enthusiast of the Year. A separate display on the show field housed five vehicles from his collection which best illustrated his passion for collecting automobiles. The cars included a 1938 Alfa Romeo 8C 2900 'B' Touring Spyder, a 1954 Maserati A6G 2000, a 1960 Ferrari 250 GT Cabriolet Speciale, a 1937 BMW 328 Mille Miglia 'Buegelfalte' and a 1938 Talbot Lago T-150C SS.

Best In Show
The final highlight of Concours events is the awarding of the best-in-show award, and it is a special tradition of the Concours d'Elegance of America to present two such awards, one to the best domestic vehicle and one to the best foreign vehicle.

The Best in Show - American went to a 1932 Duesenberg Model J Convertible Victoria by Murphy owned by William and Barbara Parfet of Hickory Corners, Michigan. Best in Show - Foreign went to a 1939 Bugatti T57C Cabriolet from the Patterson Collection of Louisville, Kentucky.

The large crowd was at rapt attention during the entire presentation of awards, but Olympic style fervor seemed to overcome everyone at the grand finale, when both top winning cars drove towards each other, headlight to headlight, to 'take their award winning bow.' The crowd applauded wildly and gathered as close as they could to the winning automobiles.

The final Concours day on Sunday caps off a week of auto-related activities including a screening of the Formula One biopic Rush, informative seminars free to the public, automotive art exhibitions, Classic car motor tours, a black-tie Saturday night celebration, the RM Classic Car Auction, and more.
The Concours d'Elegance of America presented dozens of awards over the weekend including best of class. Below is a short selection of some of the special awards:

Along with the Concours d'Elegance, the event also featured RM's Motor City auction of more than 75 automobiles and three free seminars which focused on topics like restoration versus preservation, the value of unrestored cars in the marketplace, and automotive design. Other events included Purse-suasion, a ladies' luncheon sponsored by the ladies of the Mercedes-Benz Club of America, and the second annual 'Italian Happening' on the 18th hole of the golf course featuring a glorious array of Italian-built automobiles. The Saturday night celebration, High Heels & Wheels, had everyone in black ties and high spirits.

The Setting
The Inn at St. John's offers the Concours more than 200 acres of beautifully landscaped countryside and handsome grounds for showcasing the 'by invitation only' world class automobiles traditionally shown at the event. The showcase autos compete for honors during the show. Classic, rare and magnificent automobiles from across the country and the world have been invited to participate.

The Concours d'Elegance of America at St. John's offers visitors an unparalleled experience of elegance from another era and a once in a lifetime opportunity to see so many valuable and important automobiles at one place and at one time. The total field is valued at well over 25 million dollars.


Thank you to everyone who made the 2014 Concours d'Elegance of America at St. John's such a wonderful show!
Galleries
Gas Light